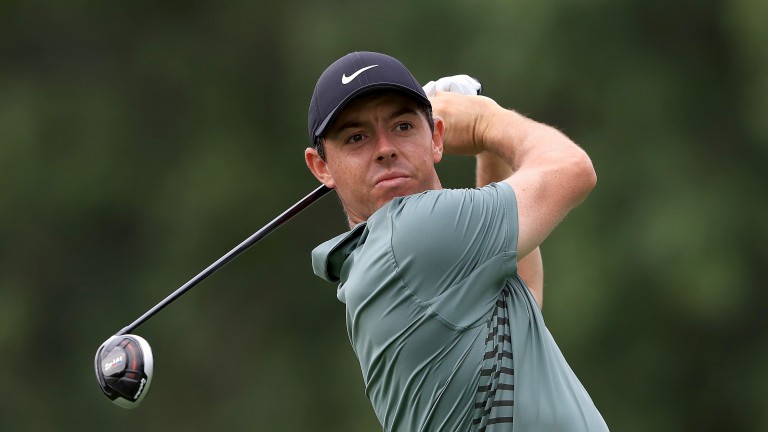 The Monday-night withdrawal of eight-time Bay Hill winner Tiger Woods has taken some intensity out of the Arnold Palmer Invitational – the 14-times Major champ is suffering with a neck strain – but five of the world's top seven are lining up for an elite event.

Rory McIlroy, who turned into Superman down the final stretch last year, hardened at the top of the betting after Woods pulled out. The defending champion is no bigger than 7-1 to retain his Arnold Palmer title.

McIlroy magic made this tournament a joy 12 months ago, but the little Northern Irishman was 18-1 then and has not won anything since. The course suits him greatly and he has been swinging well, but 7-1 seems short given final-group woes over the last three years.

McIlroy won at Bay Hill from behind and recent performances when front-running or jostling for the lead have been disappointing. The former world number one is obviously a serious title candidate, but has to be passed over on value grounds.

With so much quality stacked at the top of the market, it would be a surprise should a US Tour maiden manage to overcome all the world-class talent on show under perfect Florida skies. Jason Kokrak, Luke List and Byeong Hun An are three maidens who can be fancied to threaten the places, but punters hunting the trophy winner are pointed towards Brooks Koepka and Jason Day.

Koepka is a Floridian who has been relishing this run of events in his home state. Injury meant he had to miss most of them last year and the three-time Major champion is making up for lost time. He finished second in the Honda Classic on Sunday, when only one player in the field bettered his 66, and his trophy haul should be enhanced soon enough.

Keith Mitchell birdied the 72nd hole to deny Koepka a crack at a Honda playoff, but the star of 2018 can get his fix of Florida glory at Bay Hill instead. The Arnold Palmer venue sets up well for Koepka and he should do himself justice there this time.

A share of 26th place on his Bay Hill debut in 2014 was solid – he was world number 74 and making only his tenth start in a US Tour event – and injury ruined his return the following year. A painful rib problem developed prior to round two and although he battled to a 66, the issue worsened over the weekend and he withdrew after 12 holes of round four.

Koepka's only subsequent Bay Hill appearance came in 2017, but he arrived in dire form, starting the year with results of MC-42-MC-MC-48. He missed the Arnold Palmer cut by a shot. This time, having won three Majors and two other titles since his last Bay Hill visit, confidence levels are through the roof and the track is at his mercy.

The course sets up perfectly for powerful, attacking players, and Koepka can be fancied to tear it apart given a half-decent week of putting. He holed out with aplomb on Sunday, making every putt he lined up which was shorter than 12 feet, so there are positive signs that his flat stick could be about to purr again. Given how successful he has been since McIlroy's last victory, it is an insult to Koepka that he is available at significantly bigger odds.

Players need to be at ease off the course to be able to perform at their best on it, and Jason Day has got into the right frame of mind to be a serious Bay Hill threat. The Aussie has got a smile on his face again and can go close to a second Arnold Palmer Invitational triumph.

Day was derailed by back problems, his mother's lung cancer, his wife suffering a miscarriage, and he parted ways with long-time caddie Colin Swatton amid the strife, quickly losing his world-number-one status at the start of 2017.

Two years later, he is fully fit, his mum has had successful surgery, his wife gave birth to their third child in November, and Swatton is content with his role solely as Day's coach rather than caddie as well. Last season yielded two victories but a further decline in world ranking – this season should marry the old consistency to further silverware.

“I've just got a clearer head,” said Day at Pebble Beach last time out. “When you don't have any distractions, you can focus on playing. Things start to align and become more balanced – I'm very close to getting back to where I need to be.”

Day has finished fifth at Torrey Pines and fourth at Pebble Beach in his latest starts, and he has arrived at a Bay Hill layout which plays to his strengths. Calm skies will allow him to fire his towering approaches – hardly anybody on tour hits their ball higher than Day – at the firm, fast greens with confidence.

Day, who lived in Orlando for just over a year at the start of his US Tour career, won at Bay Hill in 2016, one of only four players to have triumphed there since the latest redesign. Matt Every, Marc Leishman and McIlroy are the others. Day also won the Players Championship in Florida that year and another Sunshine State success came in the 2014 Shark Shootout with a weak partner (Cameron Tringale).

Like Koepka, Daniel Berger starred as an amateur at Florida State University, and the 25-year-old looks ready to rumble in his home state this week. Berger is fully fit for the first time in several months, having had the second half of last season hampered by wrist problems, and second place in the Puerto Rico Open was a significant confidence-booster the week before last.

Berger, who finished sixth in the US Open and 12th in the US PGA last term, shared 36th place in the Honda Classic last week and should go from strength to strength over the rest of the season. The 2015 Rookie of the Year has won twice on the US Tour and represented his country with distinction in the Presidents Cup. With his health restored, success should follow.

Berger lost a playoff for the 2015 Honda Classic and finished ninth in the Players Championship the following year. His only Arnold Palmer invitation resulted in a tie for 13th spot when a US Tour rookie in 2015. Florida is obviously his favoured terrain and he looks the outsider most likely to prevail.

Rickie Fowler
The darling of the galleries tied for second place with Koepka in the Honda on Sunday and has started the year impressively. He should threaten a third victory in his adopted home state, but Koepka and Day are marginally preferred at a similar price.

Bubba Watson
The enigmatic left-hander won three times on the US Tour last season and finished fourth at Bay Hill in 2012. There are worse bets than the dual Masters champion.

Keith Mitchell
The Honda Classic champion is actually better suited to the demands of Bay Hill. Could ride the wave and contend again.

Justin Rose
The Englishman, who has just lost his world-number-one ranking to Dustin Johnson, is acting as tournament host this year. He has not been sighted since missing the cut in the Saudi International a month ago.

Bryson DeChambeau
The world number five was runner-up to McIlroy last year, but disgraced himself again in Mexico last time out, ruining a green on his way to 56th place in the 72-runner event.

When to watch Live on Sky Sports Golf from 2pm Thursday

Course overview Bay Hill has hosted a US Tour event every year since 1979 and this tournament has been played as the Arnold Palmer Invitational since 2007. Palmer made significant changes to the track before the 2010 tournament, so form before that is of little relevance, and he widened the fairways in 2015, resulting in lower scoring. Two of the par-threes (the 231-yard second and the 221-yard 17th) are tough, water is in play on several holes and there are lots of doglegs. The fifth (390-yard par-four), 13th (370-yard par-four) and 16th (511-yard par-five) are great birdie opportunities

Weather forecast Clear and sunny throughout, with light breezes

Type of player suited to the challenge Palmer took the bite out of Bay Hill in 2015, widening the fairways, aiding big-hitters. Birdies should be freely available in pleasant conditions. Greenside run-off areas demand sound scrambling