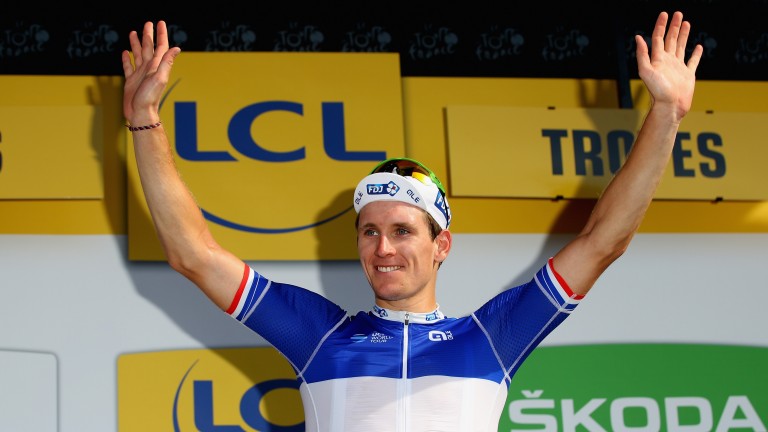 Dylan Groenewegen powered to victory on stage seven of the Tour de France on Friday.

After nearly six hours of benign racing on the longest day of this year’s Tour, Groenewegen timed his sprint to perfection to claim victory in Chartres and crack the sprinting stranglehold held by Fernando Gaviria and Peter Sagan in the process.

There was little change in the general classification with Greg van Avermaet holding on to the yellow jersey, although the Belgian did manage to double his advantage over Geraint Thomas to six seconds by winning the day’s bonus sprint.

Stage eight will once again take place on the flatlands of northern France and given this will be the last chance for the sprinters to take centre stage until late next week, a bunch finish looks guaranteed.

The sprint stages so far have established a definitive pecking order of fast men with Gaviria and Sagan by far the likeliest winners, while Groenewegen’s win yesterday showed he is best placed to take advantage should they misfire.

Tour stalwarts Marcel Kittel and Mark Cavendish have both failed to fire while Andre Greipel looks to now lack the top-end speed he once possessed.

Kittel was going off odds-on for flat stages after winning two of what would be an eventual five stage wins last year and bookmakers seem to have finally cottoned on to Gaviria’s prowess having allowed him to win stages at 11-4 at 2-1.

The Colombian is 6-4 with bet365 to claim a third stage of his debut Tour this afternoon and while he has shown he is undoubtedly the man to beat there could be better value further down the market.

Few riders will be as motivated to win this stage on Bastille Day than France’s Arnaud Demare.

Demare has not had the same amount of success that he enjoyed prior to last year’s Tour with just two stage victories.

However, one of those wins came on the final pan-flat stage of last month’s Tour de Suisse when he beat Gaviria and Sagan, while a third-placed finish on stage two and fourth yesterday suggests that he is coming into some form as the race progresses.

Demare won an incident-packed stage into Vittel last year in which Peter Sagan was later thrown out of the Tour, which featured a similar technical finish.

As was the case on that stage, the peloton turn sharply on the approach to the finish meaning positioning will be key.

Gaviria’s Quick-Step Floors lead-out found a similarly twisting finish to stage two difficult to control and it could be the same again.

At double-figure odds, Demare looks a spot of value to mark France’s national day with a first French success of the 2018 Tour de France.