Ariya Jutanugarn should be hard to stop after links boost

Second favourite Jin-Young Ko could be the Thai's chief danger 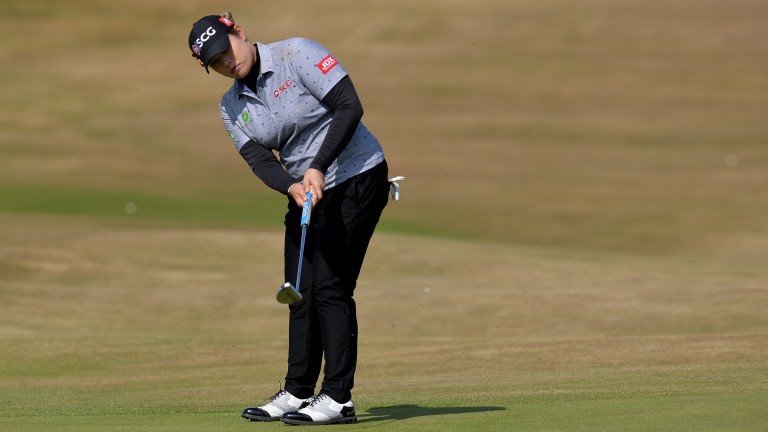 Ariya Jutanugarm on the way to winning the Scottish Open last week
Mark Runnacles
1 of 1
By Jeremy Chapman 8:00PM, JUL 31 2018

Starts 6.30am Thursday
Live on Sky Sports Golf from 11am

Sadly, it's quite a big price as there are few who can stand up to the might of a ferocious Asian challenge, headed by the two best women golfers in the world, powerful Thai Ariya Jutanugarn and the South Korean winner of seven Majors, the great Inbee Park.

Swedish six-footer Anna Nordqvist is the highest European at 15 in the rankings but it is the younger-generation English trio of Charley Hull (ranked 27), Georgia Hall (39) and exciting new kid on the block Bronte Law who have the potential for an upset.

Hull has been placed in the top ten in the first three Majors and is enjoying her best spell on the LPGA Tour. "Majors suit my game," she said. "I like the pressure and the courses are set up tougher."

Hall was joint third in last year's Open at Kingsbarns, like Lytham a links, and Law, the first GB & Ireland player to go 5 and 0 in the Curtis Cup, has made an eye­catching start to her pro career with three top-ten finishes on the tough LPGA circuit.

The secret of playing Lytham is to stay out of the bunkers. There are 169 of them, more than any other famous links. That's what Catriona Matthew did so well in 2009 when the course last hosted this championship.

And amazingly she teed up that week only 11 weeks after giving birth to her second child. Matthew is 48 now, still playing well and the last British winner but Hull and Hall will have their day and both are worth an each-way interest.

However, Jutanugarn, whose first links victory at the Scottish Open at Gullane on Sunday shot her to number one in the world rankings for the second time and must boost her confidence for this week's task, should be devilishly hard to beat.

She won this tournament at Woburn two years ago and the US Open in May. Still only 22, she has won ten times in 26 months on the LPGA Tour.

Those who played well at Gullane could have an edge, so runner-up Minjee Lee and third Jin-Young Ko could challenge again. Having finished runner-up to Inbee Park on another links, Turnberry, three years ago, Ko clearly thrives on this type of golf.

Inbee finished only 24th at Lytham in 2009 but says she learned much about how to play links golf in the wind that week. The Olympic gold medallist has won this year but that was a while ago and her last two efforts were substandard. Another Park, Sung Hyun Park, could be a bigger danger.

America’s best golfer Lexi Thompson is not coming. She's taking a break from the game to recharge her batteries and has not been the same since losing last year's Inspiration after being docked four shots for a retro­spective infringement reported by a TV viewer of not replacing her ball in exactly the right spot on the green.

Course winner taking part Catriona Matthew (2009 British Open)
When to bet By 6.30am Thursday
Where to watch Live on Sky Sports all four days, starting at 11am

The story of last year Short-hitting South Korean In-Kyung Kim was always in control at Kingsbarns, leading by six going into the final round. She won by two with US-based English non-winner Jodi Ewart Shadoff closing with a Sunday 64 to finish second

Course overview Tough, flat, uncompromising but very fair links that has hosted four Women’s British Opens, won by Sherri Steinhauer twice, in 1998 and 2006, Annika Sörenstam in 2003 and Catriona Matthew in 2009.

Matthew was the only player to finish under par there that year. Seve Ballesteros won two of his three Opens there and in 1969 it was the scene of Tony Jacklin’s greatest moment.