Conte 13-8 for Chelsea chop before end of campaign

Arsene Wenger 5-4 to have another season at Arsenal 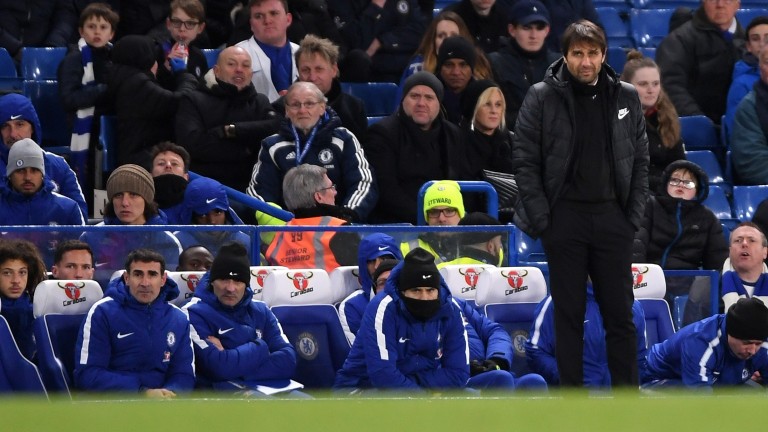 As far as tough times go it's not exactly a disaster to be fourth in the Premier League and still fighting for the FA Cup and Champions League, but the pressure is on Chelsea boss Antonio Conte following Wednesday's dreadful 3-0 home defeat to Bournemouth.

Conte has continually complained about the lack of investment at Stamford Bridge this season and his mood has not improved despite the deadline-day arrival of Olivier Giroud from Arsenal.

Bookmakers are totally split on Conte's short-term Chelsea future with Coral offering 6-4 about the Italian remaining in charge for the final match of this season, while Hills go 13-8 for the champions to make a managerial change during this campaign.

It has left an underround book with the layers offering wildly differing odds, although Ladbrokes are convinced Conte will be on his way before the start of next season, quoting 1-2 about a new manager being in place.

Despite the issues, Betfair offer 21-10 about Chelsea failing to finish in this season's top four. Conte is 9-4 with Sky Bet to be the next Premier League manager to leave his current position.

Mesut Ozil has signed a new long-term contract at Arsenal but Arsene Wenger may not be around long enough to reap the benefits of the German playmaker.

It's 4-7 with Hills that Arsenal have a new manager in situ by the start of next season with 5-4 offered for Wenger to remain.