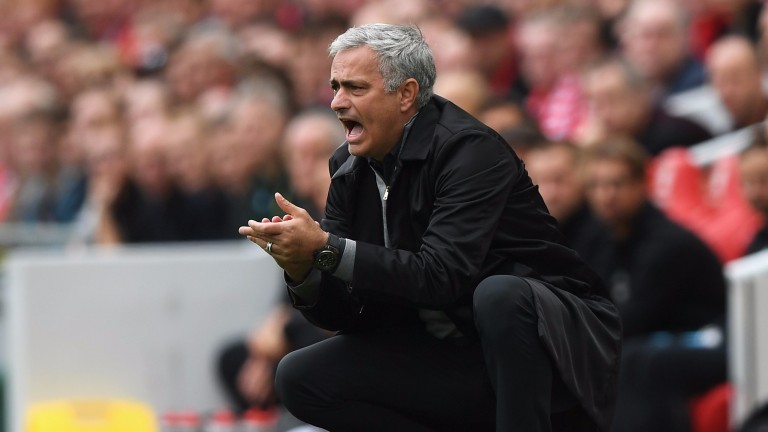 1 United boss won't be changing his tactics
The only surprising aspect of Manchester United's performance was that anyone was remotely surprised by the defensive tactics adopted by Jose Mourinho in the 0-0 draw against Liverpool at Anfield.

Some had suggested, perhaps more in hope than expectation, that United would be different this season.

But those people were forgetting his whole career has been based around adopting this kind of football, particularly in the bigger away matches.

However, this was no defensive masterclass.

Liverpool's expected goals figure was around two and the tactics only worked if the plan was to let the hosts create good opportunities and hoped they missed or that David de Gea would come to the rescue.

United rarely threatened Liverpool's dodgy defence, which is criminal given the players they possess in the attacking third.

Since Mourinho arrived at Old Trafford his team have played seven away matches in all competitions away to their fellow big six rivals and their record is no wins, three draws and four defeats. Only nine goals have been conceded but they have scored just once.

United supporters, who used to chant "attack, attack, attack", appear to have been brainwashed into thinking this is the right approach but they would be better suited trying to win than trying not to lose.

2 Silva has the golden touch
Apart from a dismantling at the hands of Manchester City - and they won't be the only team to suffer that fate - Watford have been excellent this season and maybe Marco Silva is somebody Arsenal should be looking at when it comes to replacing Arsene Wenger.

Saturday's win over the Gunners included a soft penalty award but Silva makes good substitutions and it looks as if the team are not only full of belief but also much fitter than last season.

Tom Cleverley's winner was the fourth time they have scored in or after the 90th minute this season.

3 Zaha's impact Crystal clear for Palace
It took a long time coming but Crystal Palace finally got their first goal, points and win of the Premier League season against Chelsea and it was the returning Wilfried Zaha who did the damage at Selhurst Park.

Zaha's impact on the side is enormous and Palace have a fair chance to get back to a respectable points tally with a decent run of fixtures against Newcastle, West Ham, Tottenham, Everton, Stoke, Brighton, West Brom, Bournemouth, Watford, Leicester and Swansea before Christmas.

4 Oxford are over their blip
It was a strange spell for Oxford, who lost three on the spin to Blackpool, Walsall and Bury with some awful performances among them but they appear over that blip after an excellent 1-0 victory at Bristol Rovers which moved United back into the top six of Sky Bet League One.

That's three successive league wins by an aggregate margin of 8-1 and sets them up nicely for two big home contests against Charlton and Rotherham before the break for the FA Cup first round.

5 No party for the Stags
League Two ante-post favourites Mansfield are well off the pace after Saturday's 3-1 loss to Swindon made it three defeats in four games.

The usually brash boss Steve Evans cut a despondent figure on the touchline in last week's loss to Colchester and something is clearly amiss at Field Mill.