Andy Robertson could be involved in some spicy action 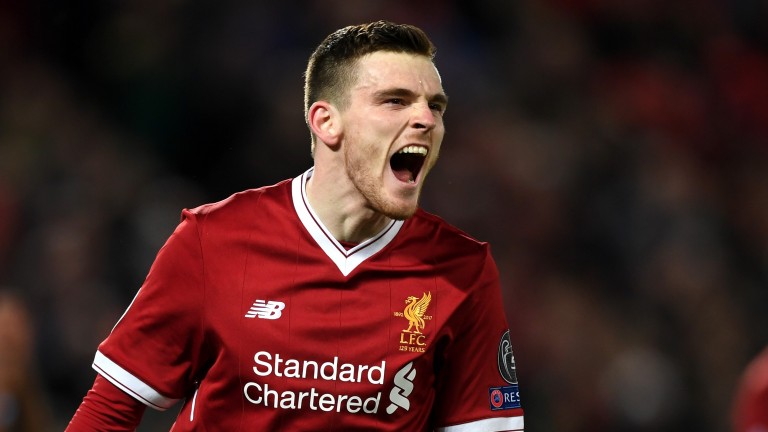 Andy Robertson said he watched last season's Champions League final with a takeaway curry but the Liverpool left-back could be involved in some spicy action against Real Madrid.

Robertson's rags-to-riches tale is heartwarming stuff. He was released by Celtic before plying his trade in the Scottish third division and the former Hull man was seemingly not loved by Liverpool at the start of this campaign when behind Alberto Moreno in the pecking order. But his all-action approach has made him a favourite with the Anfield faithful.

Given his passionate performances it is a surprise he has been booked just three times this season, but there are many tricky forwards in the Real Madrid ranks and the Scot's sometimes over-zealous tackling could make him vulnerable to a booking.

To some this final is as much Cristiano Ronaldo versus Mohamed Salah as it is Liverpool against Real Madrid and it's no shock to see the two goalscoring machines at the head of the man-of-the-match betting.

Ronaldo, who has played every minute of Real's run to the Champions League final, has scored 25 times in his last 17 appearances in Europe's premier club competition.

He has the most shots (33 on and 33 off target) in this season's Champions League and also comes into the final in fine nick, having notched in each of his last ten league matches.

Salah, meanwhile, has set a new Premier League record for a 38-game season with 32 goals this season to land the Golden Boot and is on 44 for a truly remarkable debut term on Merseyside.

A hat-trick, however unlikely it may seem, would see Salah equal Ian Rush's record of 47 goals in a season set in 1984 and his battle with the gung-ho Marcelo down the Liverpool right will be fascinating.

Marcelo has scored in every knockout round despite apparently being a left-back, although for a big-priced goalscorer it could well be cometh the hour cometh the man for Madrid.

Step forward Sergio Ramos, who has scored in both of Real Madrid's Champions League triumphs over Atletico Madrid and remains a major threat against Liverpool's perceived weakness at set-pieces.

Reds keeper Loris Karius has improved throughout the season, yet he is by no means perfect when crosses come into his penalty area and Toni Kroos is one of the world's best at producing excellent dead-ball deliveries.

The same could be said of Real's stopper Keylor Navas and those aiming a dart at a Liverpool first scorer could do worse than going Dutch with Virgil van Dijk.