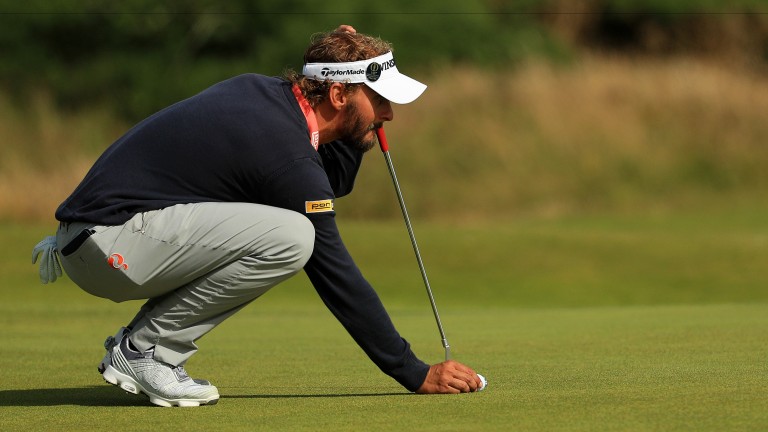 Sergio Garcia led the field a merry dance at Valderrama for a third time last year, leaving Jon Rahm and the rest in his wake, and the favourite can boast incredible course form figures of 7-5-7-7-2-2-2-34-4-10-1-3-1-1. Garcia is the undisputed king of Sotogrande.

If he is anything close to his best, the vastly experienced Ryder Cup star would be almost impossible to oppose – 14 starts, with three wins, three runner-up spots, nine top-fives and 13 top-tens is an awesome course record – and he has won a total of seven European Tour events in Spain.

Garcia, though, who is moody at the best of times, has been down in the dumps of late, missing the cut in the Masters, the US PGA and the Canadian Open, slumping to a seven-over-par weekend at the US Open, before missing another cut in the BMW International last week. Six of those seven triumphs in his homeland have come in October (the other was in April), so he has never won in June conditions, and the host does not look ready to give the locals much to cheer this time.

Rahm missed the Valderrama cut by three shots on his only previous visit and is not well suited to this layout. Matt Fitzpatrick has a perfect style of play for the assignment and was in superb nick for the final three rounds of the BMW last week. Fitzpatrick is the most attractive option of the front three, but he is making his Valderrama debut, so may need time to settle.

Valderrama is an unusual test, demanding sound course management, patience, precision and fortitude, and it can take years before players feel comfortable along these dangerous, tree-lined corridors. Even Sergio Garcia was not victorious until his 11th visit and debutants have a significant disadvantage to overcome.

Joost Luiten can approach the task with more confidence than most having built a hugely respectable Valderrama record at the age of 33. His first two trips to Spain resulted in finishes of fourth and second on the Challenge Tour, then he was 19-48-6-17-28-3 in his first six European Tour starts in the country. It is when he got to Valderrama, though, that his love affair with Spanish fairways intensified.

Luiten was fifth in the 2010 Andalucia Masters, beaten by only three shots on his Valderrama debut, then runner-up to Andrew Johnston in the 2016 Spanish Open at the track, beaten by only a shot, then runner-up again, this time to Garcia, in the 2017 Andalucia Masters, again beaten by a single shot. Even after spending five months on the sidelines with an injured wrist, Luiten returned to action at Valderrama last year and finished 11th.

With Garcia out of sorts, Luiten will see this week as a golden chance to finally land the glory his golf at the venue has deserved. His 11-under-par 72-hole total in 2017 would have been enough to win any of the previous ten European Tour events staged at this iconic venue, but he ran into an inspired local hero.

A couple of US Tour invites mean Luiten has been competing in high-class company a lot lately – four of his last eight events have been on the US Tour schedule – and a return to Europe should mean the six-time ET champion gets back in the hunt for silverware.

Last week's missed cut in the BMW was disappointing, but he made an eagle and eight birdies in the Wednesday Pro-Am, and it will probably not be long before he is back in the sort of form which delivered third place in Abu Dhabi in January, then sixth in Saudi Arabia, tenth in the Mexico WGC and eighth in the British Masters.

The precision and temperament of Marcus Kinhult makes him an ideal candidate for Valderrama joy and the calm Swedish youngster has finished 42nd and 22nd in his two previous visits. His 2017 campaign featured some great golf in Spain – fourth and fifth in two Nordic League events, then sixth and third in two Challenge Tour events – and he has since established himself as a European Tour champion.

Kinhult, who claimed a European Tour card at Q-School in Girona in 2015, won the British Masters in gutsy fashion in May, fending off British trio Matt Wallace, Eddie Pepperell and Robert MacIntyre, and the baby-faced assassin gained further confidence from his debut in a Stateside Major last time out.

Nobody in the US Open field bettered the closing 66 of Kinhult, who moved up to 32nd spot, and that Pebble Beach beauty has sent him to Valderrama in high spirits.

Aaron Rai won his maiden European Tour title in a similar examination of accuracy at Hong Kong Golf Club at the end of November, and the straight-hitting Wolverhampton man is well suited to Valderrama. He won one of his three Challenge Tour titles in Andalucia – the 2017 Costa del Sol Match Play – and eighth place as a rookie in the 2017 Andalucia Masters was a superb debut.

A closing 67 for 18th spot in Denmark last time out suggests Rai, 15th on Tour for both driving accuracy and greens in regulation, has got his act together in time for an event which suits, while Spanish trio Adrian Otaegui, Jorge Campillo and Alejandro Canizares have also shown enough to indicate they could upstage Garcia and the rest.

Otaegui, a two-time ET champion, tied 38th on his ET Valderrama debut in 2016, a decent effort as he was world number 722 at the time, and a closing 69 for 12th spot in 2017 proved this tidy sort can handle the track. He was gutted to miss last year's Andalucia Masters, but had qualifed for the following week's big-money WGC-HSBC in China and opted to make that long trek early.

Last October presented a tough scheduling decision for the Spaniards and Otaegui got it right because bad weather meant the Valderrama event could not be completed until the Monday. Campillo took the gamble and entered the Andalucia Masters, but disqualified himself on the Sunday, so he could get to China for the HSBC. He was one under at the time – and a level-par final round would have been enough for 16th place – but he needed to catch his flight to China. There are no distractions for Campillo this year, the former amateur star knows Valderrama well and is suited by its challenge, and he is in the form of his life, having claimed a maiden ET title in Morocco in April amid four other top-three finishes.

Wrist problems saw Canizares drop down the world rankings, but Valderrama is his home track and if a third ET victory comes anywhere, this is the most likely venue. His ET form there is 21-7-11-36-16 and he loves competing in his homeland, a fact underlined by second place in the 2007 Madrid Open, third in the 2010 Spanish Open, a playoff defeat in the 2010 Mallorca Open and second in the 2012 Spanish Open. An encouraging ninth place in Denmark a month ago has been followed by missed cuts by just a shot in Belgium and Germany.

Others to note
Ashley Chesters
The straight-hitting Shrewsbury man has finished 12th and fourth in the last two Valderrama events, and warmed up with some tidy golf in Germany last week.

Jason Scrivener
The accurate Australian, like Chesters, is well suited to the Valderrama assignment and can feature on the leaderboard at a decent price.

Mikko Korhonen
The steady Finn, who won the China Open last month, finished third in the last Andalucia Masters, closing with a 67.

Andrea Pavan
The BMW champion is strong with his three-wood and two-iron and back-to-back victories should not be ruled out.

Wade Ormsby
The precise Aussie relishes the dimensions of Valderrama, where he finished fifth in 2017.

Fabrizio Zanotti
The fairway-finding Paraguayan is yet to make an impact at Valderrama, but he has the tools to succeed there and has made his last 11 ET cuts, finishing second in Oman in March.

When to watch Live on Sky Sports from 11am Thursday

Course overview Valderrama is one of the iconic courses of the world. It was the traditional venue for the European Tour's traditional season-closer, the Volvo Masters, which it staged from 1988 to 1996, then from 2002 to 2008. The Andalucia Masters was created in 2010 to restore Valderrama to the schedule, then it was played again in 2011, with tournament host Sergio Garcia emerging triumphant. The Andalucia Masters returned to the calendar in October, 2017, after a six-year absence, then last year the event was reduced to three rounds due to bad weather. Garcia demanded a move from October to June and an increased prize fund – he has got both, with €1m added to the pot this year. The 1997 Ryder Cup was played on this course, as well as the 1999 and 2000 WGC-AmEx Championship. And the Spanish Open was staged at Valderrama for the only time in April, 2016. Valderrama, designed by Robert Trent Senior and opened in 1974, is one of the tightest tracks in Europe, with thin, tree-lined fairways flanked by heavy rough. Over-hanging trees can impact approach shots, even from the fairways. Small, undulating greens, which are surrounded by heavy rough, add to the challenge and one over par for 72 holes was enough to top the leaderboard in the Spanish Open there. There are only three par-fives (fourth, 11th and 17th). The layout is typically in pristine condition

Weather forecast Bad October weather reduced the event to 54 holes last year, but 72 are certain this time, with sunshine and light to moderate breezes all week

Type of player suited to the challenge Valderrama is an extreme test of tee-to-green precision. The penalties for straying off line are severe and accurate approaches are essential this year with so much heavy rough around the greens. Support tidy players who can grind out pars