Johnson back with old driver and putter 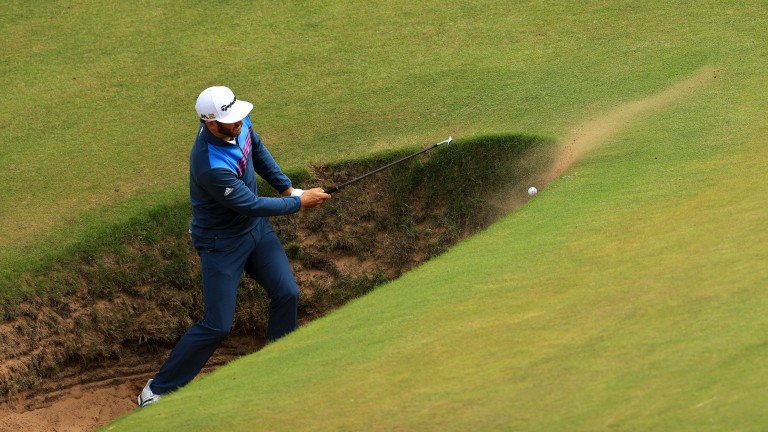 Story so far
Tyrrell Hatton will take a one-shot lead into the final round of the Abu Dhabi Championship, the Englishman having edged ahead with a birdie at the 18th hole.

Hatton, a 28-1 chance ante-post, is 5-1 second-favourite with 18 holes to play. He won his maiden European Tour title in October – the Dunhill Links Championship at St Andrews.

Dustin Johnson started the tournament as market leader and regained that status with a superb third-round 64. Johnson made only seven birdies in total over the first two days, but a flawless Saturday effort yielded six birdies and an eagle, leaving the American sharing second place.

Johnson, 6-1 at the outset, is a best-price 100-30. Three-time Abu Dhabi champion Martin Kaymer is tied for second and 7-1 for a fourth victory. There are 11 players within two shots of the lead and a thrilling Sunday shootout looks in store.

Final-round advice
The Abu Dhabi Championship was a tough tournament for punters at the start, with strength through the field and plenty of title candidates, and the puzzle remains a difficult one with only 18 holes to play.

There are 16 players within three shots of the lead and anyone at ten under par or better is entitled to have serious ambitions about lifting the trophy. There has never been a playoff in the 11 previous Abu Dhabi events, but there seems a strong chance of that streak ending.

The pacesetter, Tyrrell Hatton, has won only once before and that was a runaway success on a links layout. Hatton has never triumphed in a tight battle and on his last visit to the United Arab Emirates he made a bogey-six at the 72nd hole to lose the DP World Tour Championship by a shot.

Hatton could be quickly swamped given the quality just behind him. Dustin Johnson needed two days to shake jet-lag, rustiness and lack of course knowledge out of his system, but a third-round 64 puts the best player in the field bang in the thick of things.

Johnson did not step out of second gear in rounds one and two, and it is worrying for his rivals that he has been able to get so close to the lead playing half the tournament in lacklustre fashion. He tested a new driver and a new putter early in the week, before restoring his old tools for round three. In a flash, refreshed, with some course knowledge and the right equipment in hand, Johnson has become the most likely champion.

Martin Kaymer has not won anything since June 2014, and is far less convincing in contention than he used to be. The German famously blew a ten-shot advantage over the final 13 holes of the 2015 Abu Dhabi renewal, a spectacular meltdown which will surely prey on his mind should he hit the front again on the same layout on Sunday.

Kiradech Aphibarnrat and Pablo Larrazabal may be too loose from tee to green to emerge triumphant in this competitive heat, while Tommy Fleetwood has much to prove with regards to putting and bottle.

The action resumes at 3.40am Sunday, with the final threeball of Hatton, Johnson and Larrazabal teeing off at 8.01am. Sunny, hot conditions with light winds are expected.

Threeball punters are pointed towards Johnson in the final match. The US Open champion should outclass Hatton and Larrazabal now that he has got three days of experience at Abu Dhabi under his belt. Both Hatton and Larrazabal are likely to feel plenty of nerves in his illustrious company.

Rafa Cabrera-Bello was struggling with a back injury throughout round three, then missed a tiddler on the final hole to compound his misery. The Spaniard, rarely a strong finisher at the best of times, looks vulnerable at a short price in the 6.50am contest. Paul Dunne can edge Cabrera-Bello and Bradley Dredge.