Amazing fall from grace could continue for champions

Swansea fancied to hunt down Foxes 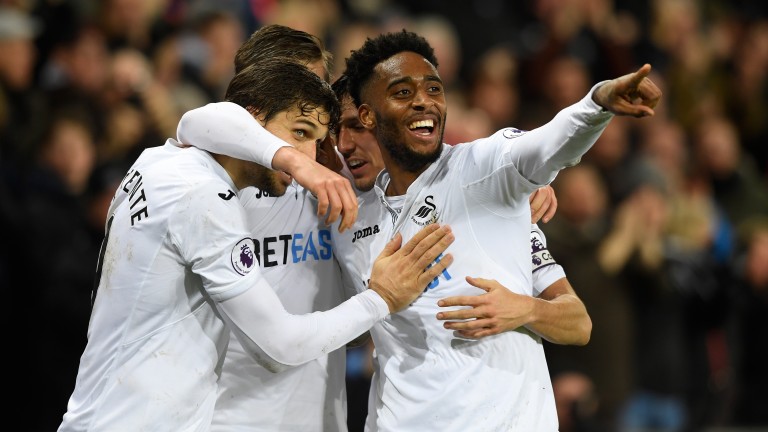 After the 5,000-1 miracle of winning the Premier League it was never going to be easy to predict the future of the Foxes, who were 50-1 shots to suffer relegation this season in the opening show.

That was backed down to 16-1 by the time the campaign began and, while it won't match the most costly football ante-post coup in history when Leicester defied impossible odds to stun the watching world, bookmakers are beginning to get edgy regarding the alarming descent.

Those nerves could grow into a panic after this trip to the Liberty Stadium with Swansea fancied to make life even more uncomfortable for Claudio Ranieri's squad.

Many reasons have been suggested for the tumble down the table with the two excuses wheeled out most often being N'Golo Kante's transfer to Chelsea and a lack of unity in the dressing-room after some players were rewarded with bumper new contracts.

Maybe the Foxes were just never that good.

At the start of last season they were 3-1 to be relegated - the same price as Aston Villa - and only four teams began the campaign as a shorter price to go down.

The rest is history but Leicester started April 2015 at 2-9 to be relegated and rock-bottom, seven points from safety following a defeat at Tottenham with a team that included the likes of Kasper Schmeichel, Wes Morgan, Robert Huth and Jamie Vardy in the starting 11.

Danny Drinkwater and Riyad Mahrez, who would go on to become star men in the championship success the following season, were only considered good enough for the bench and with hindsight maybe this season's struggle should be considered the norm.

Ranieri's side have not won away in the Premier League this term and have failed to score in four of their last five trips to fellow top-flight opponents. They have also scored one league goal in seven matches since Christmas.

Swansea have had a much better 2017 with three victories in five Premier League matches and the two losses came against Arsenal and Manchester City.

Gylfi Sigurdsson has notched in each of his last three matches and his form is in stark contrast to that of Leicester's main men.

Mahrez has notched three Premier League goals this season, all of them penalties, and Vardy is having the kind of campaign that suggests his Hollywood movie may not have a perfect ending.

Vardy, who is doubtful for the trip to Swansea, has failed to score in 23 of his last 24 club matches in all competitions. The party looks well and truly over.

Team news
Swansea
Jordan Ayew is available to make his debut but Jefferson Montero and Sung-Yueng Ki are out. Leon Britton is doubtful.

Leicester
Jamie Vardy is doubtful with a calf injury, while Islam Slimani is not at peak fitness either. Danny Simpson is another doubt and Leonardo Ulloa is definitely ruled out.

Listen to our Postcast on Sunday's Premier League matches