Alex could be in wonderland against great rival Thiem

Kasatkina may be ready to bring down US Open champ 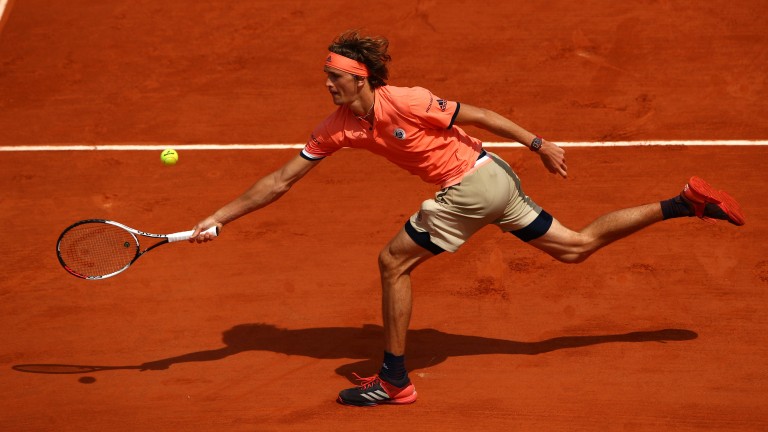 Thiem v A Zverev
Three French Open five-set victories on the spin for Alexander Zverev have led oddsmakers to make Dominic Thiem favourite to beat the second seed, but while things have not been easy for the German in recent days he seems to have plenty left in the tank at Roland Garros.

Zverev's first-round thrashing of Ricardas Berankis suggests he's in good form and bookmakers may have gone too soon in taking on the Madrid champion after his narrow wins over Dusan Lajovic, Damir Dzumhur and Karen Khachanov.

They are all good players who were playing at or near the peak of their powers, and with doubts over Thiem's freshness as the tournament goes on – the Austrian won the Lyon title a day before the Paris action started – he can be taken on.

Cecchinato v Djokovic
Marco Cecchinato will be a new name to many of those who follow just the Grand Slam tournaments, but he's one of a number of promising Italian ATP players who could shine for his country in the coming years.

However, the first player from Sicily to win an ATP main tour title is likely to come under serious pressure against Novak Djokovic, who posted his best match win since his come­back when ousting Fernando Verdasco 6-3 6-4 6-2 in round four.

Unsurprisingly Djokovic is quoted at just 4-6 to register another straight-sets success, but while that can be considered Cecchinato may have the youth and energy to shake things up a bit and get under the Serb's skin.

While the match winner should not be in doubt, it's difficult to make a strong case for having a bet on any other market. Many will expect Djokovic to come through fairly easily but it might not be straightforward.

Putintseva v Keys
Yulia Putintseva did well to take advantage of Qiang Wang struggling to get over the line in the last 32, but aside from that outing a trio of 6-4 6-3 triumphs are difficult to fault.

The Russian is almost univer­sally underrated by oddsmakers, but while consistency may be an issue she has shown enough gameness and effort to make punters query why she's constantly written off.

That said, the fun is likely to end for Putintseva in the last eight against Madison Keys.

The American has few weak­nesses on any terrain and while Putintseva will give it plenty of huff and puff, it's difficult to see how she can handle Keys' powerful groundstrokes.

Keys may not give her opponent any breathing space and the favourite triumphing in straight sets looks the bet.

Stephens v Kasatkina
Sloane Stephens has served notice that she is a potential career Slam winner with her efforts in Paris, but the US Open champion may have to give best to Daria Kasatkina on this occasion.

Stephens had no concerns against opponents Anett Konta­veit, Magdalena Frech and Arantxa Rus but it was an entirely different story as she clung on to edge past Camila Giorgi in round three.

Kasatkina has bags of potential and looks a potential world number one, so punters who oppose Stephens should know they're siding with a genuinely top-notch performer.

The early support was for Stephens to carry on in winning vein, but Kasatkina appears to be a potential stumbling block for the tenth seed.