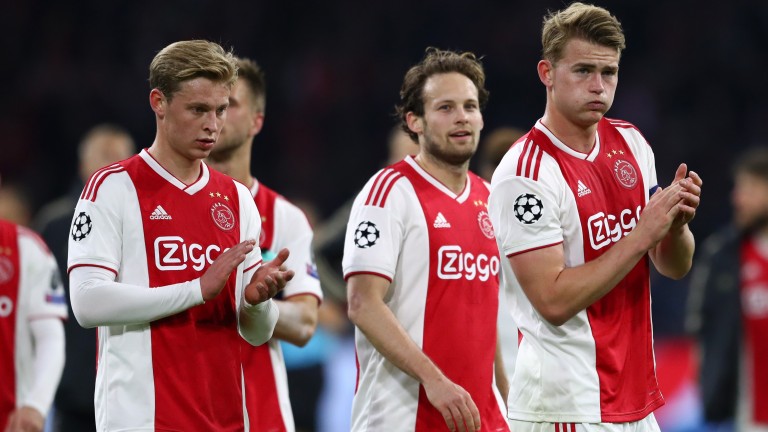 Ajax have defied the odds to reach the Champions League last-four
Michael Steele
1 of 1
By Mark Langdon 1:29PM, APR 29 2019

Ajax's Champions League campaign started just ten days after the end of the World Cup and few could have predicted they would still be going at the semi-final stage.

There was relief rather than fanfare in Amsterdam after Ajax opened up with a 2-0 win over Sturm Graz on July 25 given that the previous summer had been a shambles for the famous Dutch outfit.

Ajax failed to reach the Europa League group phase having been knocked out of the Champions League third-round qualifiers by Nice and suffering the same treatment at the hands of Rosenborg in the secondary competition.

The transformation is clear, although it was perhaps not so obvious at the start of the Champions League group stage when Ajax were available at 250-1 to win the tournament.

Erik ten Hag's side went to Munich in October as 16-1 shots to beat Bayern, who were 1-5, and the Dutch dazzled in a 1-1 draw, although they still had to settle for second spot in the section ahead of Benfica and AEK Athens.

Ajax's knockout draw – on paper at least – was most unkind with a last-16 date against three-peaters Real Madrid and that partly explains their odds of 100-1 to win the Champions League in February.

Any punters delighted with their original 250-1 ante-post bets on Ajax were back to square one following a 2-1 home leg loss to Real Madrid but the Dutch side stunned the footballing world with an incredible 4-1 comeback demolition job on the holders at the Bernabeu.

Ajax were still 40-1 ahead of the Juventus quarter-final, but their dismantling of the Old Lady combined with Manchester City's elimination saw them chopped to 9-2 to lift the European Cup for the first time since 1995.

Those who have followed Ajax recently have cleaned up – they were 19-4 to win in Madrid and 9-2 in Turin – but will they wipe the floor with Tottenham after finally receiving respect from the layers?

For the first time since those qualifying successes over Sturm Graz, Standard Liege and Dynamo Kiev, Ajax are favourites to qualify from a tie, which will bring a different kind of dynamic to their semi-final test.

Whatever happens against Tottenham, Ten Hag's swashbuckling youngsters have come a long way. But, with the side set to be broken up in the summer, this is the only chance for this crop to win a Champions League for Ajax.

Those on at fancy prices will know that now-or-never feeling.