Ajax should clean up against weakened Lyon 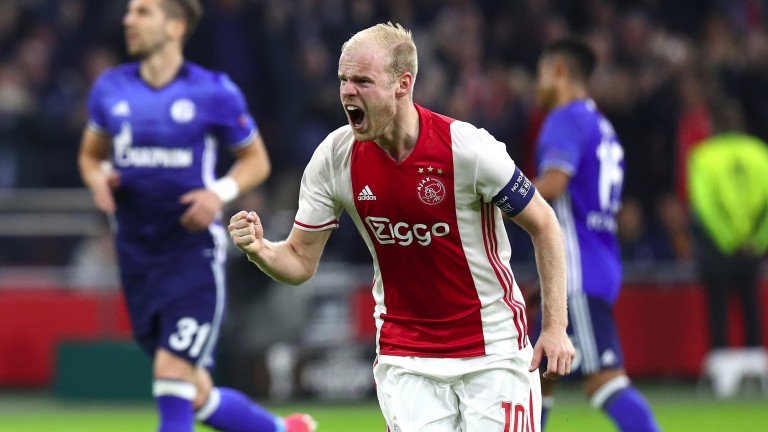 Davy Klaassen netted a double in Ajax's first-leg victory over Schalke
Dean Mouhtaropoulos
1 of 1
By Steve Davies 8:12PM, MAY 2 2017

Ajax's home record is tough to ignore as the Dutch giants prepare to take on crack French outfit Lyon at the Amsterdam ArenA.

Peter Bosz’s men have won all six home ties in the Europa League and can make it seven by seeing off a Lyon outfit likely to be missing their top scorer.

Bosz has to reshuffle at the rear with first-choice full-backs Nick Viergiver and Joel Veltman suspended, but this is a team who have kept four successive home clean sheets in the Europa League – the last against Schalke – and know how to defend.

Lyon are arguably no better than two of Ajax’s victims, Celta Vigo and Schalke, and they will certainly be weakened by the absence of ace marksman Alexandre Lacazette, one of Europe’s most sought-after strikers with 31 goals in all competitions this season.

Nabil Fekir, who has scored 16 but only one in his last nine, is set to lead the line for Les Gones and it’s not a like-for-like swap. They are brilliant together but Lyon definitely lack a spark without Lacazette.

Bruno Genesio’s men have lost their last two Europa League road trips – at Roma and Besiktas – and are inconsistent with three wins and five losses in their last nine.

Both teams have scored in six of Ajax’s last eight and eight of Lyon’s last nine but the 8-15 that both teams score in this one looks short.

Lyon
Top scorer Alexandre Lacazette (thigh) is out and Corentin Tolisso (ankle) a doubt. Centre-back Emmanuel Mammana has recovered from a knee injury.

Key stat
Ajax have won all six home Europa League ties, five of them to nil.