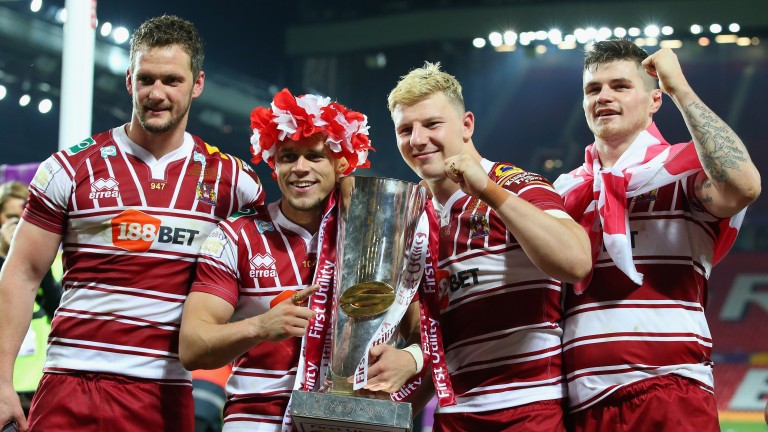 Wigan have never won successive Grand Finals but after the Warriors edged out Warrington in a nailbiting decider at Old Trafford last October, bookmakers have installed Shaun Wane’s side as 3-1 favourites to win the Betfred Super League.

The Warriors’ fourth Grand Final victory continued the domination of a select group of clubs in rugby league’s summer era – all 19 Super League showpieces have been won by either Wigan, Leeds, St Helens or Bradford.

Warrington have threatened to make their big breakthrough by reaching three Grand Finals in the last five seasons but a club lurking much further down bookmakers’ lists could be the ones to finally crack the cartel.

Castleford coach Daryl Powell refuses to adopt the structured style used by a number of his counterparts, instead preaching a free-flowing approach that harks back to a bygone era. Last season their matches averaged close to 55 points – no other club’s topped 50.

It has made the Tigers the neutrals’ choice but they’re fast becoming the punters’ choice too. In the immediate aftermath of Wigan’s Grand Final success, bookmakers chalked up 25-1 about Cas being crowned champions for the first time this year. Now they’re as short as 6-1.

However, there are still plenty of double-figure odds available and while BoyleSports go 16-1 win only, backing Cas each-way looks a wiser wager.

In 2014, the Tigers came within one win of topping the regular season and reached the Ladbrokes Challenge Cup final. They have finished fifth in the previous two seasons but at a generous 2-1 they can secure a top-four finish this time and earn a crack at the playoffs.

The arrival of England full-back Zak Hardaker on loan from Leeds could make a huge difference.

Hardaker was voted Man of Steel in 2015 before disciplinary problems prompted the Rhinos to let him go to the NRL last season.
He may not have pulled up any trees during his time down under but he will still have benefited from the experience.

So too will have Greg Eden who returns from Brisbane for a second spell at The Jungle to help offset the loss of the retired Luke Dorn and Denny Solomona who has defected to rugby union.

Kiwi forward Jesse Sene-Lefao has also come on board and captain Michael Shenton is fit again after missing most of 2016 through injury.

Cas, and their backers, will be disappointed if they don’t compete for trophies as well as earn plaudits for their panache.

By contrast, Wigan couldn’t care less what the critics think about their style of play.

Under Shaun Wane, the Warriors have become a well-oiled machine finishing in the top two in five of his six years in charge, winning two Grand Finals and two Challenge Cups.

Last year’s triumph was particularly remarkable given that injuries robbed Wigan of key men such as Sam and Joel Tomkins, Sean O’Loughlin and Michael McIlorum for lengthy periods.

At 3-1 to defend their crown and 11-4 to finish top of the table, the Cherry & Whites would have to be part of any punter’s portfolio.
They’ve lost playmaker Matty Smith and top tryscorer Josh Charnley but in returning pair Thomas Leuluai and Joe Burgess they have more than adequate replacements.

It’s difficult to envisage Wigan being far away when the big prizes are handed out Warrington continue to be Super League’s nearly men but at 7-2 they look best avoided.

Last season’s Grand Final defeat was the third time that Tony Smith’s team have blown a second-half lead at the Old Trafford showpiece.

They contrived to do the same thing in last season’s Challenge Cup final and even with the arrival of big-money signing Kevin Brown as a replacement for mercurial Australian half-back Chris Sandow, there are too many doubts about Warrington to be tempted at a short price.

While 2016 was ultimately a year to forget for the Wolves, it was an annus mirabilis for Hull who ended their Wembley hoodoo by winning the Challenge Cup at the national stadium for the first time.

It was disappointing, if not unexpected, that the Airlie Birds’ Super League campaign petered out after their cup triumph and Lee Radford’s men really ought to be in the mix with all that experience under the belt.

Hull will hope that the acquisition of Albert Kelly from relegated rivals Hull KR will make the difference as they chase a first title since 1983.

However, the layers have cottoned on to their capabilities.

Having gone off at 33-1 a year ago, 11-2 is the biggest price available this time and that’s no value.

Nor is the 13-2 offered against St Helens who’ve gone trophyless for the past two seasons and a continuation of that drought won’t be acceptable to fans of the five-time Grand Final winners who were ultra-critical of Saints’ style and results in the early part of 2016.

A run of 11 wins in the last 12 league games silenced the critics but with off-season capture Matty Smith out with a broken leg and Jordan Turner, Luke Walsh and Travis Burns all having departed, Keiron Cunningham’s crew could lack creativity.

Saints have finished fourth in the past two campaigns and their place in the playoff places looks under real threat.

That threat may not come from Leeds who are looking to bounce back from their worst season in two decades when they finished ninth before retaining their Super League status via a top-placed finish in the Qualifiers.

It’s more than a little surprising that the Rhinos have kept faith with the same squad that flopped last year. The exception being the arrival of Manly hooker Matt Parcell to fill the boots of James Segeyaro who was a key man in the team’s end-of-season upturn in results.

The worry for boss Brian McDermott is that injuries and age appear to be catching up with the superstars who have helped Leeds win seven Grand Finals. Even at 9-1 they look a skinny price to make it eight in October.

The 7-2 about the Rhinos suffering a second consecutive bottom-four finish could be a better bet.

Catalans have adopted the opposite approach to Leeds.

After losing 12 of their last 14 games last year, there’s been an exodus of high-profile Australians Glenn Stewart, Todd Carney and Dave Taylor plus the retirement of French stalwarts Greg Mounis and Olivier Elima.

Veteran Aussie Greg Bird returns for a second spell in the south of France – eight years after his first – while Luke Walsh makes the switch from St Helens to partner Richie Myler in the halves but even at 25-1, the Dragons make little appeal.

Coach Laurent Frayssinous starts the season under pressure and is 4-1 joint-favourite alongside Huddersfield boss Rick Stone to be the first manager to leave their post.

Bookmakers believe that Messrs. Smith, Wane and Powell are safest in their hotseats and they’re the most likely men to be lifting the silverware.

And it may pay dividends to bank on the rest of the Betfred Super League being unable to tame the Tigers in 2017.

The Super League sponsors are the only firm betting half the odds each-way to reach the final, and say they will be best price win only every team for the Grand Final until kick-off of tonight’s season-opener.