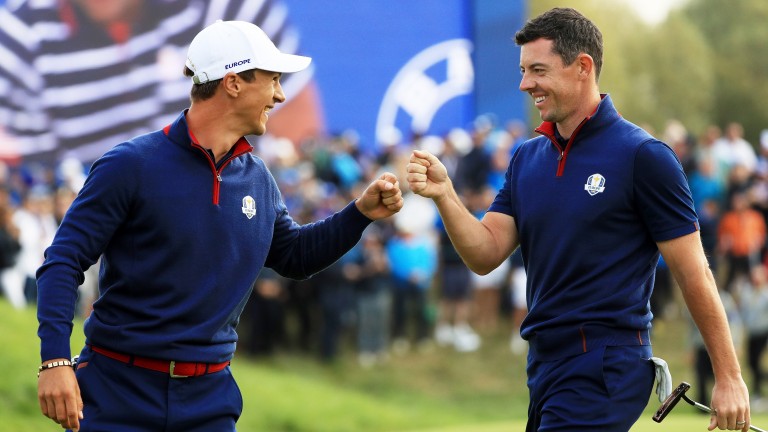 The relationship between Brooks Koepka and Dustin Johnson came under intense scrutiny during and after the Ryder Cup, a competition at which tempers flared between the pair, and the so-called Bash Brothers get to spend this week together in Abu Dhabi.

Reports suggest the pair have put their feud behind them, but the American duo are almost certainly not the great pals they were known as prior to jetting to Paris for their Ryder Cup torment. The Abu Dhabi headliners may stay out of each other's way.

Koepka missed the cut by six shots in his only previous Abu Dhabi visit in 2014. Johnson, who has course form figures of 2-9 from the last two years, has stronger claims, but is an unattractive price, while Tommy Fleetwood, bidding for three consecutive Abu Dhabi titles, may find better putters leave him behind this time in excellent scoring conditions, particularly over the first two days.

The first European Tour event of the year is finally upon us, with a Wednesday start, and plenty of the Abu Dhabi runners will be handicapped by rust. The DP World Tour Championship, almost two months ago, is the last time the circuit has staged a top-class gathering.

Thorbjorn Olesen has since competed in the World Cup for Denmark, partnering Soren Kjeldsen to fourth place in Melbourne, and Thunderbear spent last week getting back into the swing of things in Dubai.

Settling early in the Gulf for practice should allow Olesen to hit the ground running and the Danish dude looks the pick of the prices.

Olesen loves the Middle East and has long threatened a European Tour triumph there.

Olesen is a five-time European Tour champion at the age of 29 and he has also enjoyed success in pairs events, winning the World Cup in 2016 and the GolfSixes in 2017.

He is blessed with bundles of bottle and excellent putting touch, so winning a Rolex Series event like this one is well within his compass. His last victory – the Italian Open in June – had Rolex Series status and he fended off local hero Francesco Molinari to triumph.

Olesen has carried an extra layer of confidence since making his Ryder Cup debut at the end of September. He thrashed Jordan Spieth 5&4 in the Sunday singles to help Europe crush the States 17.5-10.5 and is well equipped to rip Abu Dhabi Golf Club to shreds over the next four days. This open, flat, easy track, featuring spacious dancefloors, is right up his street.

Victory in the World Cup at the end of November, playing alongside Thomas Detry for Belgium, was a huge fillip for Thomas Pieters. Becoming Belgium's first Cup winners was the culmination of four months of encouraging form for the underachieving powerhouse, who looks set for a glorious 2019 campaign.

Sixth place in the US PGA Championship was a considerable injection of confidence for Pieters and he closed the DP World Tour Championship with a 67 for a share of 12th spot. Provided he has managed to find time for some decent practice since Christmas, it is reasonable to expect fireworks in Abu Dhabi, where he finished fourth in 2015, second in 2016 and fifth last year.

One of the stories of 2018 was the way Tom Lewis reminded the world how good he is with a burst of brilliance from August onwards, a hot streak which quickly hauled him from outside the top 400 in the rankings to inside the top 100.

Lewis won a Challenge Tour event by five shots in September, then the Portugal Masters on the European Tour by three shots a fortnight later. Seventh place in Dubai was proof that this prodigy was eating from the top table of European golf again at the age of 27, seven years after his maiden victory.

Five visits to Abu Dhabi as a pro have not amounted to much, but it is a layout at which he has the tools to excel, highlighted by his opening round of 64 en route to second place in the 2009 Abu Dhabi Junior Championship.

Abu Dhabi Junior success also points to the chance of Oliver Fisher, who won that event in 2005. Fisher carded the first round of 59 in European Tour history in September, a dazzling Friday effort which helped him finish seventh, a timely reminder that the Essex boy was once considered a potential world-beater.

Fisher, 11th in the 2008 Abu Dhabi Championship and 12th in 2015, was runner-up in the Qatar Masters last February. Like Lewis, he opened his European Tour account in 2011 before waiting patiently for victory number two, and there has been enough positive evidence over the last 12 months to indicate the 30-year-old will get the job done at some stage soon.

Complete a five-pronged each-way attack with Romain Wattel, a fiery Frenchman who may have used three months off to get his head together after a disappointing season. Wattel desperately needed to hit the reset button, having got into the cut-missing habit, but he is a great natural talent who turned 28 last Thursday and still has plenty to offer.

Wattel, who won on the Challenge Tour as an amateur before getting off the mark on the European Tour in the 2017 KLM Open, tied for 14th on his Abu Dhabi debut in 2012. He finished third in the 2014 Dubai Desert Classic and is well suited to exposed Gulf layouts which lend themselves to attacking golf.

Sean Crocker
The fast-improving Zimbabwe-born American youngster has become a threat to all, but he is making his Abu Dhabi debut.

Haotong Li
The pride of China, reigning Desert Classic champion, possesses the skills to make merry at Abu Dhabi, but his meek surrender in the Turkish Airlines Open playoff is fresh in the memory.

Matt Wallace
The Londoner ended 2017 ranked 127th in the world, but won three times last year, finished second in the DP Tour Championship, and is up to 44th. Tied for 32nd in his only previous Abu Dhabi start.

Tyrrell Hatton
The Buckinghamshire boy has solid Abu Dhabi form figures of 10-6-46-13-15 and the putting ability to make hay in the forecast early calm.

Thomas Detry
The Belgian youngster, a World Cup winner alongside Thomas Pieters, looks like a European Tour champion in waiting. He finished ninth in his only previous Abu Dhabi start.

Lucas Herbert
The cocksure Aussie has quickly established himself as a European Tour threat, but is making his Abu Dhabi debut.

When to bet By 3.20am Wednesday morning

Where to watch Live on Sky Sports from 3.30am Wednesday morning

Course overview Abu Dhabi is a long, desert layout, which has traditionally been a birdie-fest, the European Tour's bombers firing at wide fairways with gay abandon since the event became part of the schedule in 2006.

For the first time this year, Abu Dhabi has become a Rolex Series event, which has resulted in the first prize being more than doubled. Prior to the 2012 renewal, winning scores of 21, 21 and 24 under par were registered.

The tournament organisers added bunkers, tightened fairways, pushed back a couple of tees and lengthened the rough, eager to provide a tougher challenge, which worked for three years, before scores lowered again, with Tommy Fleetwood reaching 22 under par 12 months ago. The course is flat and exposed, with water in play on nine holes, so any wind significantly adds to the difficulty. The greens are large.

Weather forecast Hot sunny and calm for the first two days, before Friday and Saturday provide cooler and breezier conditions.

Type of player suited to challenge Big hitters have dominated this tournament in the past – Martin Kaymer and Paul Casey have won five of the 12 renewals by employing length to devastating effect – and exposed desert layouts lend themselves to aggressive golf.