Absolute madness to overlook a punt on De Vos

Fitton missed a load of doubles against Blackwell 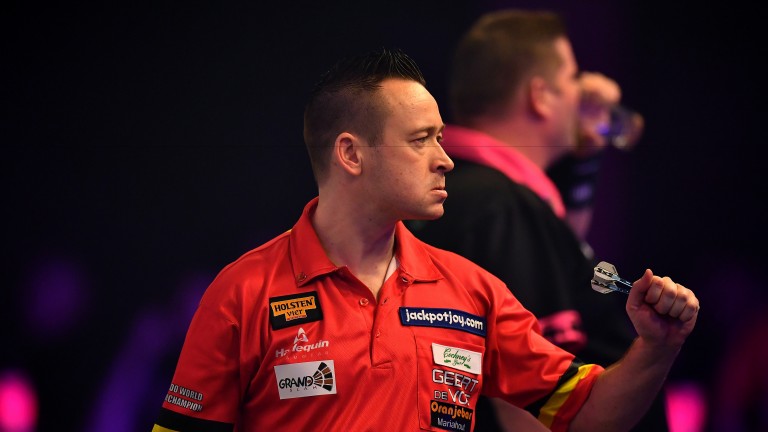 Fitton’s 4-1 win over Blackwell looks good on paper and there was certainly enough decent scoring to suggest that Dazzler is throwing fair darts.

However, Fitton won five legs against Blackwell in 21 darts and those sort of numbers are unlikely to cut it against De Vos, who has averaged 96.9 and 92.28 in his two wins over Raymond Smith and Scott Mitchell.

Even if Fitton can live with De Vos in the scoring stakes – no good thing either given that Foxy hit nine 180s in his 4-2 win over classy operator Mitchell – it’s hard to see the Cheshire chucker’s dodgy doubles holding up against the pressure De Vos is likely to put them under.

The Belgian can be backed at evens giving Fitton a start of one-and-a-half sets in this best-of-nine contest and that looks well worth a play.

There is even a chance that Fitton, who hasn’t been past the last eight since 2009, could completely fall apart and a small split-stakes wager on a 5-0 and 5-1 scoreline at juicy prices is worth chancing.

M Adams v J Hughes
Martin Adams had been in pretty poor nick in the lead-up to Lakeside and although his form has picked up as this tournament has progressed he could find his progress halted by Jamie Hughes.

Humbled by Michael van Gerwen, Max Hopp and Brendan Dolan when finishing bottom of the group in the Grand Slam and beaten by John O’Shea at the last-32 stage in the World Masters there wasn’t much expected of Wolfie this time around.

A 3-2 win over Ryan Joyce and an impressive 4-1 victory over Jeff Smith have sent Adams into the last eight. But the 60-year-old could face a tough challenge trying to win again, and Hughes looks a more than fair price to end Wolfie’s run.

Some excellent scoring and eight maximums from Jim Williams weren’t enough to stop Yozza coming through a comfort­able 4-1 winner in the previous round and Hughes was equally impressive when dismissing Martin Atkins 3-1 – averaging 94.38 – in his Lakeside opener.

There is a slight doubt over whether Hughes has the bottle to close out the match against a big-time player like Adams but Yozza got the job done on the TV stage against Dave Chisnall and James Wilson at the Grand Slam earlier this year and that eases those concerns.