Aberdeen primed to move into title mix with win over Hearts

Kilmarnock and Arbroath are also worthy of support 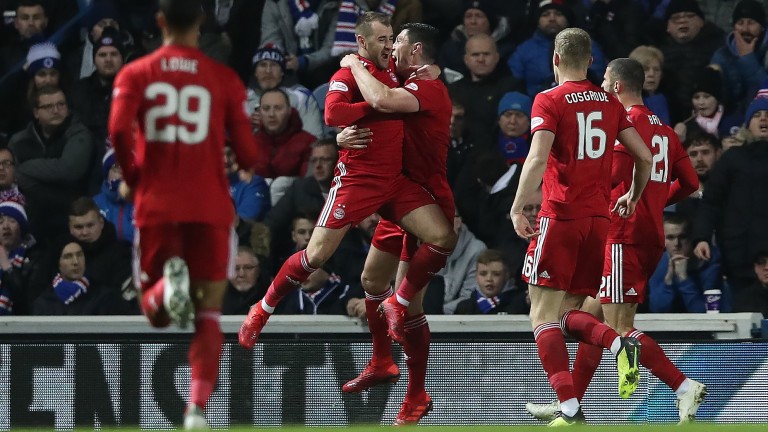 Aberdeen celebrate their goal in the recent win over Rangers at Ibrox
Ian MacNicol
1 of 1
By Mark Walker 8:03PM, DEC 21 2018

Aberdeen are on a roll and can push themselves right in the Ladbrokes Premiership mix by beating Hearts at Pittodrie.

At the start of the season, the capital side were getting all the plaudits as they raced off to a flyer, romping six points clear at the top of the league.

Since then they've done a collapse worthy of their famous implosion of 1986, when they blew a league and cup double within a week.

One win in nine in all competitions culminated in a spectacular and embarrassing 5-0 walloping at Livingston last week.

In contrast Derek McInnes' side have progressed nicely after a very slow start to the season. They've been a hard watch for much of this term, but they have still managed to beat Rangers twice, Hibs and Kilmarnock this term.

And now that McInnes has finally found a settled line-up and the Sam Cosgrove-Stevie May partnership up front is flourishing, they look good value to beat a side who appear to be in decline.

Kilmarnock can win at Hamilton Accies and maintain their unlikely title challenge.

Steve Clarke's side proved they are adept at bouncing back by easily seeing off Dundee following a painful thrashing at Celtic.

It's perhaps a surprise they are only just odds-on given how consistent and solid they have been this season.

The artificial surface at New Douglas Park won't be a problem since they play on the same pitch at Rugby Park.

Accies as always are fighting for survival and keep picking up the odd important point or two, but there's nothing to suggest the Killie bubble has burst and they should be too strong today in Lanarkshire.

Arbroath are 13 points clear of opponents Raith Rovers, unbeaten in Ladbrokes League One and have won eight games in a row in the league.

Yet they are available at evens for the top-two showdown at Gayfield. Dick Campbell's men look unstoppable and this is surely the last chance for the Kirkcaldy side to stop them racing to the title.

Rovers have also lost three of their last four away games in the league and Arbroath will want to all but finish the league off with a win.

Between them, Kevin Nisbet of Raith and Bobby Linn of Arbroath have netted 32 league goals this season, but the hosts can outscore the Fifers.