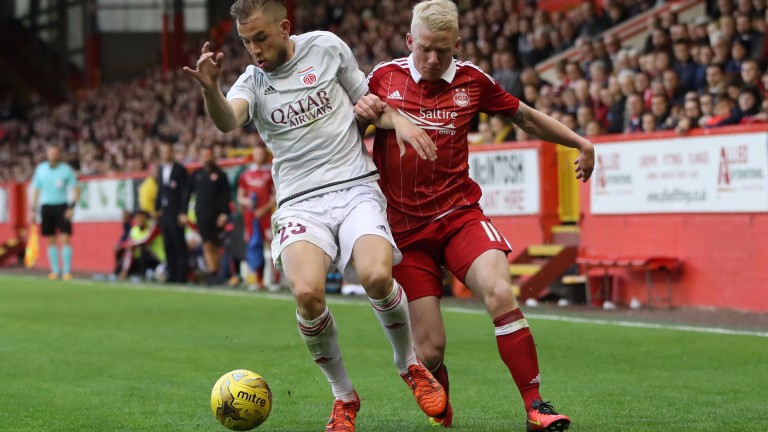 Aberdeen should be too strong for Ross County and can claim a place in the William Hill Scottish Cup quarter-finals.

The Dons haven’t won the world’s oldest trophy for 27 years, but they have a great chance of reaching the last eight.

Derek McInnes’ side have been a model of consistency and he has been able to name the same starting line-up for the past seven games. They’ve won six of them, with the only defeat at Parkhead.

The extension to Jonny Hayes’ deal will give Aberdeen a massive boost and they are playing well.

County beat Aberdeen in Dingwall this season, but it was regarded as a bit of a travesty after Aberdeen dominated.

Jim McIntyre’s men got a draw last week at Rangers, but keeper Scott Fox enjoyed the game of his life. He’ll need to be on top form again against the Dons.

St Johnstone can get the upper hand against Partick Thistle. There are no worries about weakened team selections in Scotland. And there’s plenty reasons for believing Saints should win. Last week, they were on course for a shock result against Celtic, until a penalty decision went against them.

They’ve already defeated Thistle this month and Tommy Wright will be eyeing another run in the cup that he won in 2015.

Alan Archibald’s men often play well, but converting chances is usually an issue and Saints have netted at least twice in their last three home games.

Dunfermline will fancy their chances against injury-hit Hamilton Accies at East End Park.

The Pars had been steadily improving until they came unstuck at Falkirk. But if they can regroup, they can have a go against an Accies side who may be missing nine first-team players.

Of those injuries, by far the biggest loss is influential young playmaker Ali Crawford and Accies will struggle to create much without him.

Dunfermline fancy it in Fife – their last home loss in the league came against Hibs in October and it would hardly be a huge shock if they got the better of Hamilton.