Patriots having conceded at least 24 points in five matches 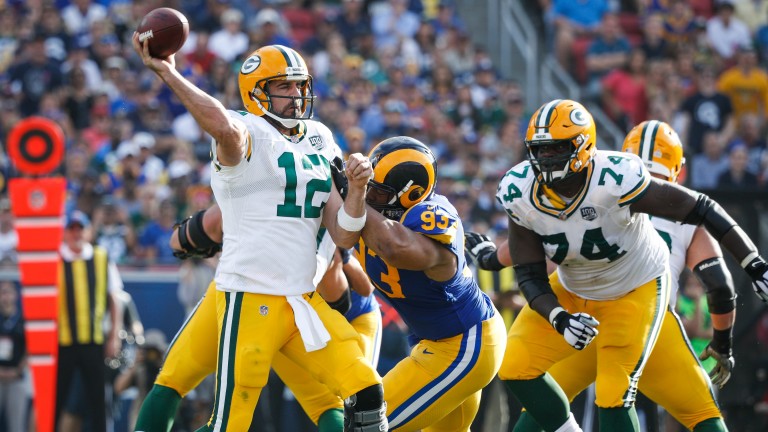 Green Bay Packers QB Aaron Rodgers gets a pass away under pressure against the LA Rams
Getty Images
1 of 1
By Ian Wilkerson 8:36PM, NOV 3 2018

Green Bay showed their mettle in a two-point defeat to the unbeaten Los Angeles Rams last week, but life doesn't get easier for the Packers.

They head to New England for what should be a titanic Sunday Night Football clash between arguably the best two quarterbacks in the game, but at first glance it looks as if the statistics are stacked against them.

Despite having been handed a sizeable handicap start, they don't tend to be the force on the road that they are at Lambeau Field. The Patriots are solid on their own patch, having won their last 11 matches at Gillette Stadium, with nine of those successes coming by a margin of at least seven points.

For New England, it has been a familiar story. They have won their last five matches after a limp display in a 26-10 Week Three defeat in Detroit and having a stranglehold on the AFC East is hardly alien territory.

They should be confident given the Packers have conceded an average of 30.3 points in their away matches, but the visitors can play their part too.

Green Bay have scored at least 22 points in all but one of their matches this term and with the Patriots having conceded at least 24 points in five of their last seven, Aaron Rodgers can direct another great performance under the glare of the prime-time cameras.

New England
Guard Shaq Mason has been ruled out with a groin injury having missed practice all week. Tight end Rob Gronkowski is expected to play having missed Monday's victory over Buffalo with a back injury.