6 Six Nations try-scorers to follow: three from the start, three off the bench 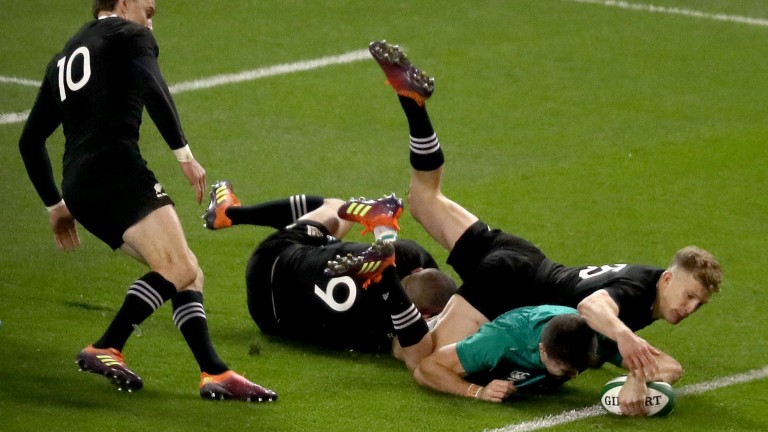 Ireland's Jacob Stockdale scores a try despite the efforts of All Blacks Aaron Smith and Damian McKenzie
INPHO
1 of 1
By Max Oram UPDATED 12:11AM, JAN 30 2019

Three from the start

Stockdale, who has scored 12 tries in 14 Tests, claimed the sole five-pointer in Ireland's win over the All Blacks in November with a chip-and-chase and has dotted down six times in six European Champions Cup clashes this season as Ulster booked a quarter-final berth eight months after needing to win the Pro14 qualifier.

In that qualifier, Stockdale put the seal on a 35-17 success over Ospreys with a long-range intercept try and picking off opposition passes and turning defence into attack seems a speciality. He touched down ten times in 19 league and European outings last season and nine times the season before.

Once a peripheral Red Rose figure because of perceived defensive weaknesses and one-dimensional attacking, the Leicester wing appears to have made himself indispensable to Eddie Jones's plans and not just because of injuries and poor form elsewhere in the England squad.

May's four tries in last year's tournament (coming after an 11-game spring drought) were followed by touchdowns in all three games in South Africa this summer and he went over after two minutes against the Wallabies in November after being a held-out menace in the matches against the Springboks and New Zealand.

Since switching to Welford Road at the start of last season, May has gone over the whitewash 22 times in 34 Premiership and European games, including nine tries in ten Tigers league outings this campaign.

Outside centre Jones sent Murrayfield wild with his brace in Scotland's 25-13 victory over England last year. However, the home fans and Red Rose defenders, should not have been surprised by the damage of his running lines as he has delighted, and devastated the auld enemy, before.

A Jones double was the bright spot for Scotland in a sorry defeat at Twickenham in 2017 and he crossed twice on his full debut against Australia in November 2016 and pierced the Samoa, All Blacks and Wallabies defences on successive Saturdays the following autumn. An eighth Test try was notched in the 32-26 win over France a fortnight before the second twin strike against England.

Injuries have limited his time in a Glasgow shirt over the last year but four tries in 17 outings, and free-scoring form for the Stormers and Western Province in South Africa before that, confirms a natural instinct for the tryline.

Three from the bench

The holders' super-sub hooker is the only forward in this selection because of his current sensational five-point form for Leinster as much as his manic marauding when coming on for Ireland skipper Rory Best.

Cronin has crossed 11 times in 13 appearances for the current European and Pro14 kings as they topped their Champions Cup pool and show the way in Conference B of the league.

Last May, his try just after the break effectively confirmed their victory over Scarlets in the Pro14 Grand Final.

He has barged over once in three of the last four Six Nations.

A shoulder injury may mean that Horne does not feature in Scotland's opener against Italy at Murrayfield, which is a pity because it would have been the perfect opportunity for Greig Laidlaw's likely understudy to showcase his talents from the off.

However, the livewire Glasgow number nine is bound to be given plenty of time if Scotland need to change the tempo of their play markedly and his sublime, angled on-the-shoulder support runs are made for the later stages of tournament matches.

Horne has scored eight tries in 15 Warriors European and Pro14 appearances this season and crossed ten times in 18 outings the season before, his breakout one at Scotstoun.

In between these campaigns, he made his international bow and bagged a brace of tries, including a second-minute opener, in Scotland's stunning 44-15 success over Argentina in Resistencia.

Mathieu Bastareaud is clearly now the main man in Les Bleus' midfield, Gael Fickou looks revitalised for his move to Stade Francais and rookie Romain Ntamack is pushing for more than a few minutes.

But the passage of time - his international career began with tries in each of France's first four games of the 2012 tournament - and a plethora of injuries, has not hidden the brilliance of Fofana's electric, elusive running in the centres or on the wing, from Jacques Brunel.

Brunel brought Fofana back into the fold for the tour to New Zealand in the summer after 18 months on the sidelines and he was rewarded with a try in his only outing (his 15th in 45 Tests).

And while the Clermont ace missed the autumn internationals with a thigh strain, he has lost none of his pace or knack for an angle with six tries in ten Top 14 and Challenge Cup starts this season.

It's not because they lack quality and will not carry a threat in any area. George North, Liam Williams, Jonathan and Gareth Davies have proven British & Irish Lions class and they don't lack support. There is just huge doubt over what combinations Warren Gatland can and will put on the park and how the players' potency will be affected.

Evans has six tries in 12 Wales appearances and 17 touchdowns in his last 30 outings in all competitions for Scarlets including five in their disappointing Champions Cup pool campaign this season.

Worcester wing Adams, six caps-one try, is having a quieter, but still effective, campaign after scorching in for 13 Premiership tries last term.

One-cap Holmes, comfortable at full-back and on the wing, has scored 14 tries in 26 games in all competitions for Leicester since leaving Yorkshire Carnegie in the RFU Championship.