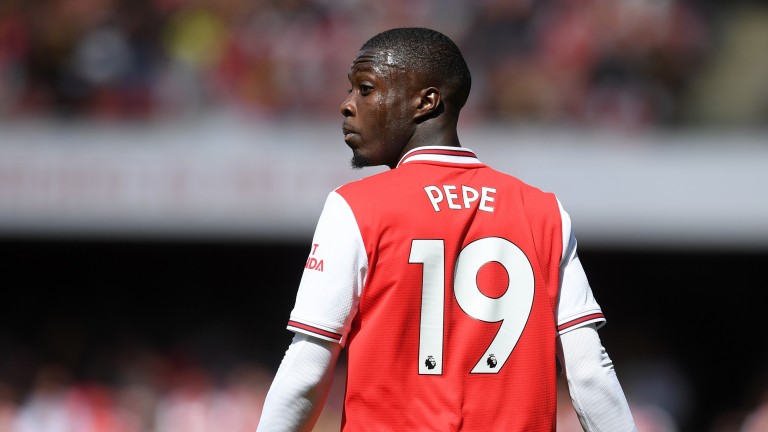 Arsenal's Nicolas Pepe looked lively against Aston Villa and may represent value to get on the scoreesheet at Leeds
Michael Regan
1 of 1
By Liam Flin 6:10PM, NOV 19 2020

Leeds and Arsenal were both blown apart in their final games before the international break and with the sides having shipped 27 Premier League goals already this term, a high-scoring clash could be on the cards at Elland Road.

But Leeds have taken time to get into their games this season, leading at the break in only one of their eight league matches in 2020-21. That suggests an Arsenal player could be likely to break the deadlock.

Nicolas Pepe was lively in the 3-0 defeat to Aston Villa, managing two shots in the contest, and with three goals in all competitions this season, he could be a fair bet to open the scoring.

Premier League highflyers Leicester could not have picked a better time to play reigning champions Liverpool, who are ravaged by injuries.

Virgil van Dijk, Joe Gomez, Trent Alexander-Arnold, Mo Salah and Fabinho are all expected to miss the clash with the Foxes, who will be eager to start on the front foot.

The Midlands side have won six of their opening eight Premier League contests, putting them top during the international break, and they have a prolific marksman to thank for their progress.

Jamie Vardy is the division's joint-top goalscorer with eight strikes this term and, fresh from scoring the first and only goal in the win over Wolves, he can draw first blood against the Reds.

Burnley are yet to win a Premier League fixture this term after seven attempts and they could struggle once again at home to Crystal Palace.

The Eagles moved up to eighth before the break thanks to a stirring attacking display in a 4-1 win over Leeds and there's no doubting Roy Hodgson's men have looked better in the final third this season.

The main beneficiary of that switch has been Wilfried Zaha, who has bagged five goals in eight matches in all competitions and he looks the most likely to open the scoring at Turf Moor.

Zaha did not get on the scoresheet against Leeds but he made three key passes and laid on an assist and should be heavily involved against Burnley.

Southampton have won five and drawn one of their previous six Premier League encounters and they do not look like slowing down.

As part of that run they held Chelsea and took down Aston Villa and Everton sides who had started the season strongly, so punters should anticipate another strong performance against Wolves, who lost to Leicester last time out.

Wolves have struggled for goals this term and the Saints make greater appeal when it comes to a first-goalscorer bet.

Che Adams, Danny Ings and James Ward-Prowse must be in the mix but a good outside selection could be towering centre-back Jannik Vestergaard, who has scored twice in his side's last four matches.