We select the players that could bag you a betting profit 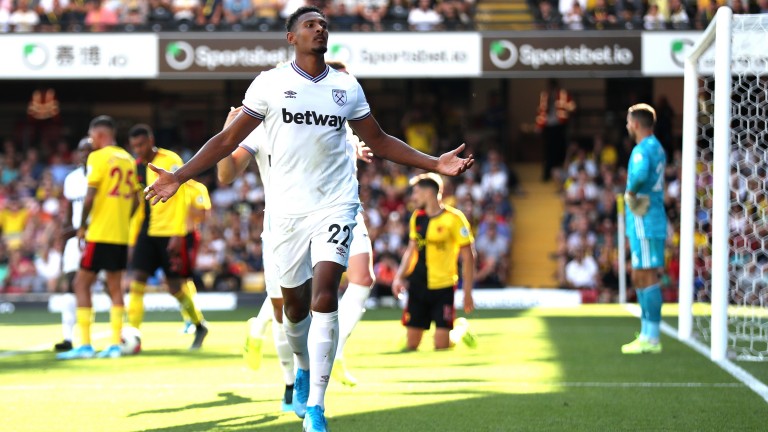 Sebastien Haller opened his account for West Ham against Watford in the Premier League
Christopher Lee
1 of 1
By Liam Flin 7:00PM, AUG 29 2019

Summer acquisition Sebastien Haller helped West Ham to their first win of the season with his brace against Watford and he can open the scoring against Norwich.

No Premier League side have conceded more than the Canaries (eight) after three games and the returning defensive partnership of Tim Klose and Christoph Zimmermann was breached by Crawley in their EFL Cup loss on Tuesday.

They could be vulnerable against Haller, who scored 15 Bundesliga goals in 2018-19 and will be brimming with confidence.

No Premier League player has had more shots this campaign than Ashley Barnes (13) and the forward has been fairly clinical with a return of four league goals.

The goalscorer market is naturally weighted in the favour of Liverpool but the Burnley marksman is a viable choice, having scored in all of his side's league assignments against Southampton, Arsenal and Wolves.

He opened the scoring in two of those games and could give Liverpool an early scare, with the Reds having conceded in all three of their opening league matches.

Everton have found goals hard to come by this season but they can draw first blood against Wolves, who will be recovering from Thursday's Europa League qualifier with Torino.

A good bet to open the scoring could be Richarlison, who notched first seven times last season, contributing to a final tally of 13 strikes in the Premier League.

The Brazilian was Everton's top scorer last term and should have opportunities on the flank against the away side's back three.

Pierre-Emerick Aubameyang notched a brace in last season's corresponding league fixture and is the prime candidate to break the deadlock in the first north London derby of the campaign.

He scored the first goal in seven Premier League assignments last term and his pace and movement could prove problematic for an unsettled Spurs unit who lost to Newcastle last time out.

The Gabonese striker got on the scoresheet in wins over Newcastle and Burnley and was involved in Arsenal's best chances against Liverpool.