Football How Chelsea won the title 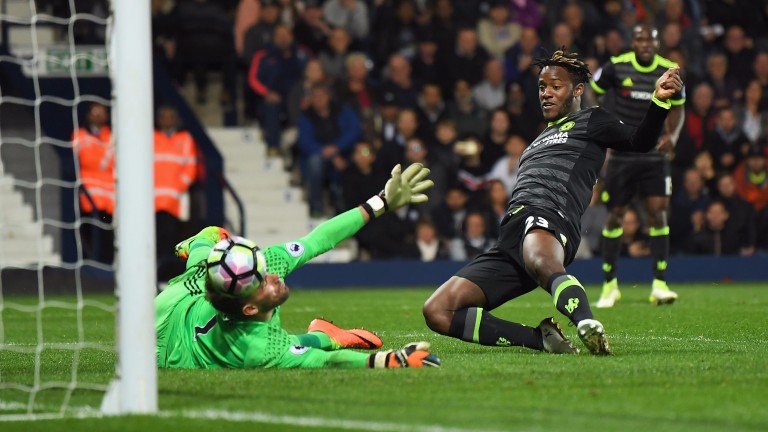 The Premier League title was sealed with a 1-0 win at West Brom but the most important moment of Chelsea's season may well have been the 3-0 defeat they suffered at Arsenal on September 24.

Chelsea were crushed at the Emirates - two down after 14 minutes and three behind at the half-time interval - but Antonio Conte used the break to switch to a three-man defence which would eventually become the catalyst for their domestic domination. 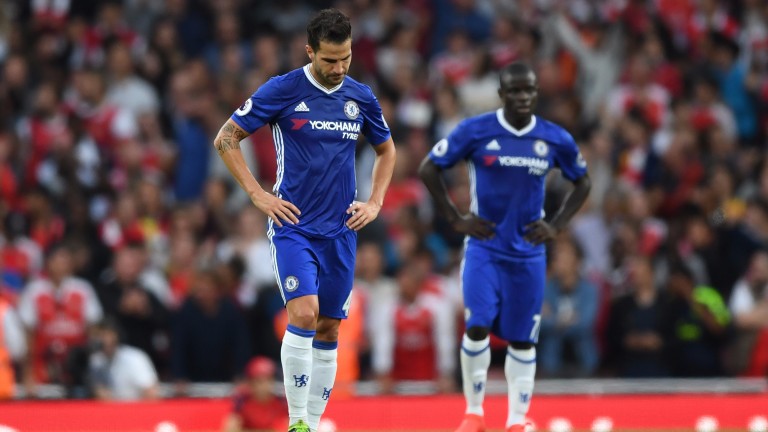 Cesc Fabregas looks dejected during a 3-0 defeat at Arsenal
Shaun Botterill
Bookmakers were not to know that Saturday evening was to be the last time Chelsea started with a four-man rearguard and they happily chalked up title odds of 25-1, a price that was cut to 18-1 after the Blues battled to an unconvincing 2-0 success at Hull next time out.

The rest is history.

Chelsea won their next 12 top-flight matches before Tottenham ended any hope of breaking the record for most consecutive Premier League triumphs on January 4.

Between those two north London defeats Chelsea's title odds had gone from 25-1 to 4-7 and despite a wobble in April with defeats to Crystal Palace and Manchester United there was rarely any concern that a coach of Conte's class would fail when it mattered most.

However, that was not always the case and during the October international break bookmakers suspended betting on Conte being the next Premier League manager to lose his job following a sustained gamble on the Italian to exit Stamford Bridge. 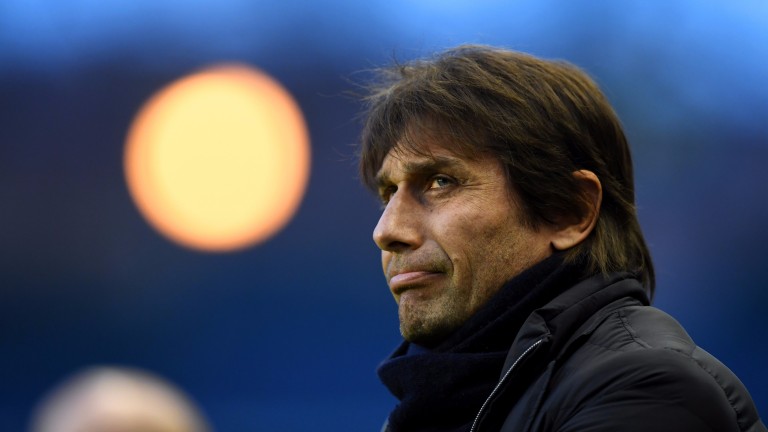 As hard as it is to believe now, Conte was under intense pressure following his slow start. Late goals nicked wins over West Ham and Watford, while a 2-2 draw at Swansea on September 11 was followed by consecutive defeats to Liverpool and Arsenal.

The former Juventus and Italy boss admitted to having sleepless nights and those who backed the Blues at 13-2 ante-post must have too.

Chelsea returned from the international break as 18-1 sixth favourites to win the title in a market that had Manchester City at 19-20, Liverpool 9-2, Arsenal 15-2, Spurs 17-2 and United 16-1 but Conte's new-look team quickly came to life.

That was best shown in a 4-0 smashing of Jose Mourinho's United at Stamford Bridge on October 23 and the failings of others meant the front five were separated by only one point with Chelsea cut to 13-2. 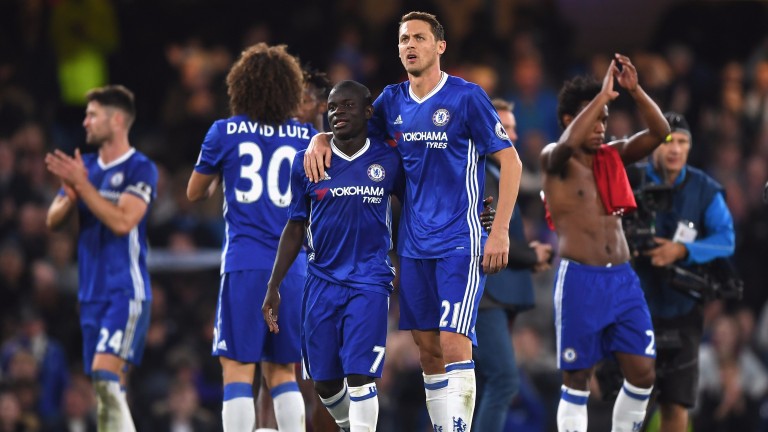 There were more contractions than in a maternity ward in the weeks which followed and Chelsea went from 6-1 to 100-30 after hitting top spot thanks to a 5-0 romp over Everton on November 5 as the eventual champions put on their own special fireworks display.

Veteran BBC commentator John Motson said in the aftermath it was the best Premier League performance he had seen and he was looking no further than Chelsea to be champions.

Motty had nailed it but bookmakers were slower to react.

The following week Hills rated Chelsea joint-favourites alongside City at 9-4 after a Diego Costa goal gave them maximum points at Middlesbrough but Pep Guardiola's outfit were still seen as the most likely champions when the teams met on December 3.

Chelsea went into that Etihad contest top of the league with the hosts one point behind but the leaders were 9-4 for the title with City 2-1 favourites and the market looked to be spot-on as Guardiola's side comfortably led 1-0 before the second half changed everything.

Kevin De Bruyne missed an open goal in the 57th minute, leading Sky Sports' co-commentator Gary Neville to ask "what has he done?" and within three minutes Costa had equalised. It was to be a pivotal few moments in the 2016-17 title battle. 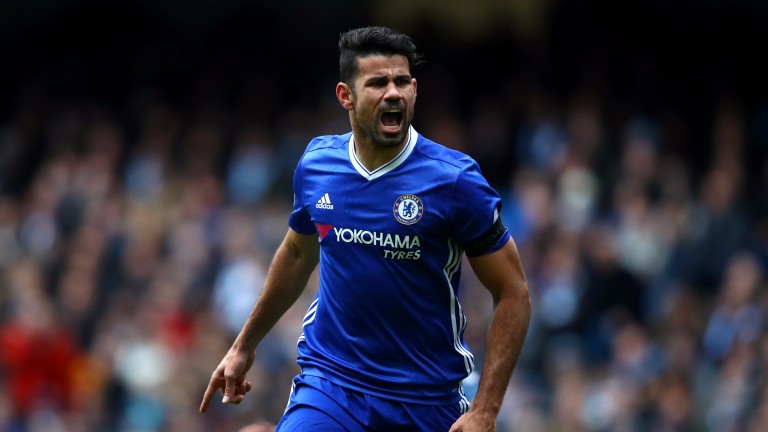 Willian put Chelsea in front, Eden Hazard added a third and Chelsea were slashed to 11-8 from 9-4, becoming clear favourites for the first time. Conte's men went odds-on across the board following a scrappy 1-0 success at Sunderland which made it ten wins on the spin on December 14.

Further victories followed against Crystal Palace, Bournemouth and Stoke and when Chelsea went to White Hart Lane they were 13-5 to obtain the two more wins needed to break the Premier League record set by Arsenal in 2002.

Two Dele Alli headers put an end to that talk but Chelsea were still five points clear of nearest challengers Liverpool and 4-5 to be champions with the 5-1 Merseysiders seen as their most likely rivals.

A top-of-the-table clash was looming at the end of January but between those 27 days Liverpool had lost their way, slipping down to fourth and Chelsea arrived at Anfield with an eight-point lead over second-placed Arsenal.

Chelsea maintained control of the championship with a 1-1 draw and they followed that effort with a 3-1 win over Arsenal which saw BoyleSports declare the title race over as they paid out with 14 matches still remaining in early February. 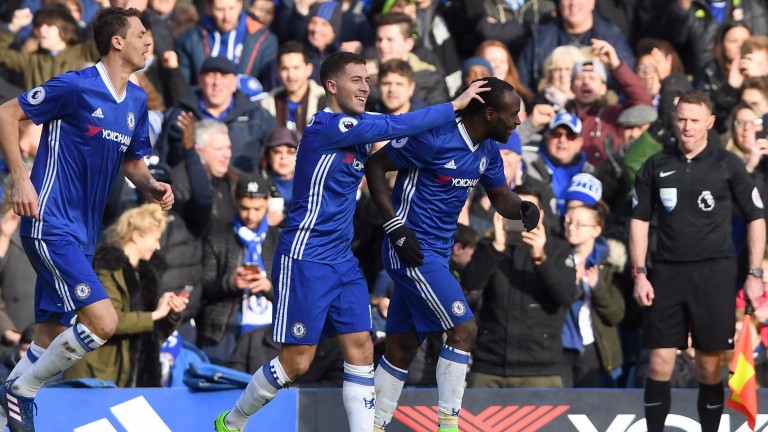 By that stage Chelsea were 1-8 and it was left to 16-1 Tottenham to try to serve it up to their London rivals, although rarely were Spurs given much encouragement on that front.

At least that was until Crystal Palace upset odds of 12-1 to win at Stamford Bridge on April 1. Spurs narrowed the gap at the summit to seven points but Chelsea were still 1-8 for the title with Tottenham 12-1.

Two weeks later and Tottenham had the deficit down to four following Chelsea's 2-0 loss at Old Trafford, a result which saw the leaders pushed out to 2-11 for the title with Spurs 9-2.

However, that was as exciting as it got.

Chelsea beat Tottenham in the FA Cup semi-finals and followed that with clutch Premier League triumphs over Southampton and Everton to become 1-16 shots, while Tottenham's loss at West Ham on May 5 effectively ended the race.

Spurs pushed them closest but it was another north London club who Chelsea have to thank for changing the course of their season. Never mind ABC, for Conte it was as simple as 3-4-3.