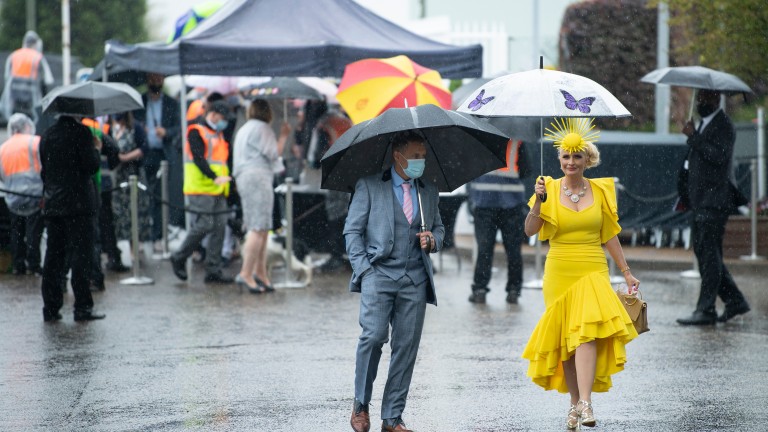 Persistent rain at Epsom has prompted a going change following the first race of the two-day Cazoo Derby festival, with conditions now described as good to soft (from good, good to firm in places).

Up to 4.8mm of rain fell before midday and it continued to pour as the opening contest, won by the George Boughey-trained juvenile Oscula, was run. The time of the Woodcote was 4.22 seconds outside of standard.

Adam Kirby, booked to partner Saffron Beach in the Oaks, is stuck in traffic and misses the ride on Hortzadar in the 1m½f handicap (2.25). He has been replaced by Murphy.

Now almost three and a half hours of persistent rain @EpsomRacecourse.

View from the track

At around 6pm yesterday I made the descent to Tattenham Corner the Cazoo Oaks field will tackle a little later this afternoon. I was wearing a T-shirt and shorts. Even if there was not a Classic about to take place, such apparel would be unsuitable right now.

It doesn't feel particularly warm. It has been, and continues to be, rather wet. The rain started at 9am. By noon it had amounted to 4.8mm. It's still raining, albeit only lightly, and is forecast to continue until 2pm. Look up and you see not a spot of blue in a thoroughly grey sky.

In less than an hour we'll get the first definitive answer of what the rain has done to the ground. It must inevitably have eased it to some extent, yet a couple of hours ago clerk of the course Andrew Cooper was extremely relaxed about the weather. Indeed, he was happy to see it arrive, given the warm, sunny forecast for Derby day.

That being the case, it would likely be wrong to think the rain will have made a significant difference to the Oaks day ground. Given how quickly Epsom drains, it might even ensure we have perfect ground for the Derby.
Lee Mottershead
Posted at 1pm

Zeyaadah is the filly to have attracted the most support this morning ahead of the Cazoo Oaks (4.30), at Epsom.

Owned by Shadwell Stud, the daughter of Tamayuz was second in the Cheshire Oaks last time and is now a general 9-2 shot (from 5) to claim a first Oaks success for her trainer Roger Varian.

Another to have been well backed is the filly who got the better of Zeyaadah at Chester, Dubai Fountain, has also been well supported and is into 7-1 (from 9)

Santa Barbara remains the 5-2 market leader as she bids to give Aidan O'Brien his ninth win in the Classic following a fourth-placed finish in the 1,000 Guineas at Newmarket.

Paddy Power spokesman PaulBinfield said: "Despite the old adage 'fourth in the Guineas, first in the Oaks' fitting favourite Santa Barbara, we’ve seen support for Zeyaadah who wasn’t beaten too far in the Cheshire Oaks despite enduring a very troubled passage that day."

Read more on the Oaks:

ITV Racing tips: one key runner from each of the five races on ITV on Friday

2021 Cazoo Oaks at Epsom: the runners, the odds, the verdict