Brametot primed for Arc after impressing in Deauville gallop 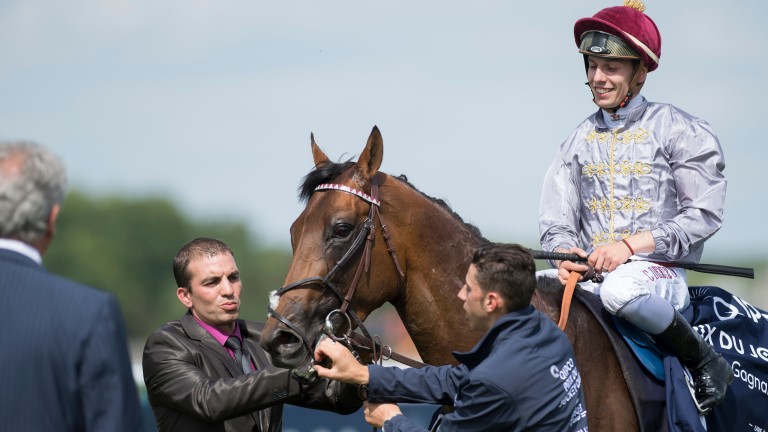 Dual Classic winner Brametot remains on course for a crack at the Arc with Jean-Claude Rouget and owners Al Shaqab optimistic that their colt can put a disasterous comeback run at Deauville well and truly behind him.

Brametot came through his latest gallop at Deauville racecourse in good style on Tuesday morning and will have one more breeze on the turf at the beginning of next week before heading to the €5 million Qatar-sponsored showpiece of the European season a week on Sunday.

The winner of the Poule d'Essai and the Prix du Jockey Club earlier in the year, Brametot conceded ten lengths at the start of the Prix Guillaume d'Ornano and was unable to get on terms with Eminent, finishing a never-closer fifth. 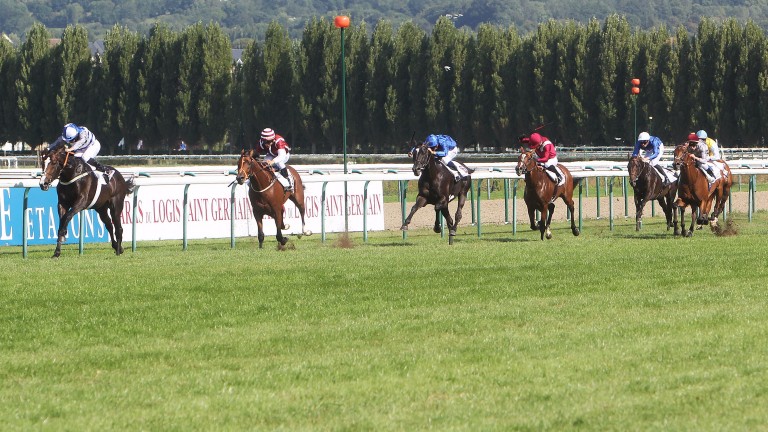 Eminent wins the Prix Guillaume d'Ornano with Brametot (right) back in fifth
Although by no means a slick starter in his previous races Brametot's problem with the stalls reached something of a crisis last time. But it emerged on Tuesday that since that run the son of Rajsaman has undergone treatment for a back niggle which the team believe may have contributed to his Deauville run.

"He has been closely looked over by Al Shaqab's vet Duncan Moir who could see that he was sore and hopefully has been able to do a couple of things that might just help the horse," said Al Shaqab representative in France, Rupert Pritchard-Gordon.

"The good thing is we had plenty of time between the Guillaume d'Ornano and the Arc and we hope he can now respond positively to the treatment. Jean-Claude was happy this morning and [jockey] Cristian Demuro was happy with the way he was moving."

Moir already has one 'assist' to his name with regard to the Arc having been part of the effort to get Treve back on track after disappointing in the Prince of Wales's Stakes in 2014, a road which ultimately led to glory at Longchamp that October.

"When they're galloping it's one thing but when they jump from the starting stalls it is often only then that you see the extent of any problem, with the propulsion they use from a standing start," said Pritchard-Gordon.

"Luckily we had six or seven weeks rather than discover a problem three weeks before the Arc in the Niel."

Royer-Dupre could yet be double-handed

Alain de Royer-Dupre was delighted with Zarak, who has not run since landing the Grand Prix de Saint-Cloud on his first try over a mile and a half on July 2, after the son of Zarkava galloped on Chantilly's Les Aigles round gallop just before first light on Tuesday morning.

Royer-Dupre said: "He worked really well. He is supple and moved like a horse who is ready. If I had to run him this Sunday there would be no problem. He'll do something similar again next week, perhaps over slightly shorter.

"He has already run well at Chantilly, including when he was second in the Jockey Club, so I have no worries on that score.

"In terms of ground he just doesn't want extremes. My only concern is what he will face in the race because there are several very, very good horses in opposition."

One Foot In Heaven could yet join Zarak in the line-up for the Arc and enjoyed a canter on the sand bordering Chantilly's vast plain, following his comeback appearance at Maisons-Laffitte on Saturday.

"Hong Kong is on his agenda but he is really well and it is by no means impossible that he will run in the Arc," said Royer-Dupre.

FIRST PUBLISHED 12:36PM, SEP 19 2017
The good thing is that we had plenty of time between the Guillaume d'Ornano and the Arc and we hope he can now respond positively to the treatment