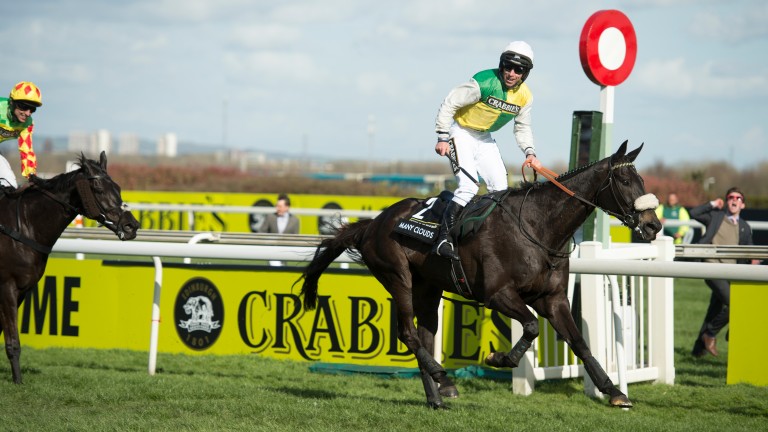 The late Many Clouds has been awarded the highest rating of any staying chaser in the 2016-17 end-of-season classification
Edward Whitaker (racingpost.com/photos)
1 of 1
By Scott Burton 2:54PM, MAY 24 2017

Many Clouds long ago cemented his place in the hearts of jump racing fans but the late chaser's end-of-season rating of 171 – a mark that elevates him above both Gold Cup hero Sizing John and King George winner Thistlecrack – delivered an unexpected surprise to his trainer Oliver Sherwood on Wednesday.

The 2015 Grand National winner proved himself better than ever last season and earned his lofty figure when defeating Thistlecrack in the Cotswold Chase at Cheltenham in January, a victory that was cruelly eclipsed within seconds as Many Clouds collapsed just after the line, having suffered a fatal internal bleed.

Tom Kerr: we came to celebrate one hero but left with tears for another

Report: Thistlecrack denied by heroic final performance of Many Clouds

Tribute: 'He gave a lot of people a lot of pleasure and won't be forgotten'

Many Clouds won 65 per cent of the votes in the Racing Post poll for Jumps Horse of the Year – a title he also took in the year of his Aintree success – but Sherwood was left momentarily stunned when contacted by the Racing Post with the news of the official handicappers' accolade.

"You're joking?" inquired a genuinely shocked Sherwood, before offering a more considered appraisal of his late star.

He said: "We always rated the horse. You never dreamed he could do what he did but you always hope. It's a great honour and I'm just sorry he's not there to carry on. I'm sure the wind op he had in the autumn made a difference and hence the improvement in his form.

"You could see from the ratings that he had improved from the season before. We're just very honoured. I've had one or two good ones like The West Awake and Large Action but he's definitely the best horse I've trained."

Many Clouds was given a final rating of 171 by the Anglo-Irish jumps classifications panel, with Thistlecrack on 170 and Sizing John on 169.

FIRST PUBLISHED 12:44PM, MAY 24 2017
We're just very honoured. I've had one or two good ones like The West Awake and Large Action but he's definitely the best horse I've trained