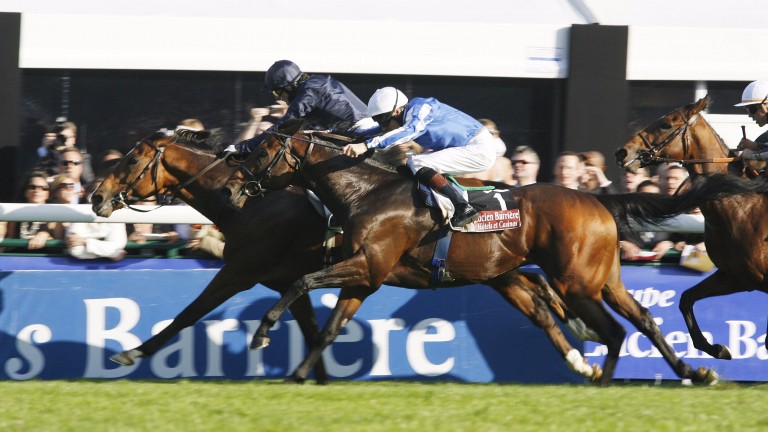 In his footballing days Mick Channon worked with plenty of legends, but in his racing career few can top three-time Arc runner-up Youmzain, one of the sport's best-known nearly horses.

The label could be regards as a little unfair as this 'nearly horse' won six times in his 32-race career, including two at Group 1 level and one Group 2 victory, amassing prize-money of more than £3.3 million.

Yet few recall his triumph in the 2008 Grand Prix de Saint-Cloud, his victory in the 2006 Preis von Europa under Kieren Fallon, or his defeat of future Breeders' Cup winner Red Rocks in the Great Voltigeur the same year.

But everyone remembers Youmzain as the horse who on the biggest occasions would beat plenty of his opponents without quite being able to score, not only at Longchamp against Dylan Thomas, Zarkava and Sea The Stars but also in the King George and twice in the Coronation Cup. He was third in another six Group 1 races.

While at the time frustrating, those near-misses far exceeded the initial expectations for Youmzain, one of two Sinndar colts who, when knocked down to Channon's bloodstock agent Gill Richardson for 30,000gns each at Tattersalls in October 2004, were intended for a different purpose.

Channon says: "Every year I had an order for Graeme Love to buy one that would get a trip and run on the Flat and then go on as a hurdler, and 30,000gns was our budget.

"I bought two Sinndars that day, both for the same price. I would have probably given Graeme the option, but Jaber Abdullah rang up and got first pick and he wanted the one out of the Sadler's Wells mare and that was Youmzain. Graeme Love had the other one; the rest is history."

It was the late Love's misfortune that the other Sinndar, whom he called Wee Charlie Castle, never won for him and was claimed eight starts into his two-year-old campaign, and the initial consensus on Youmzain was hardly more encouraging.

He was an angry youth who would bite and kick and disliked other horses getting near him. On top of that he had shown his trainer nothing on the gallops by the time he made his debut in a 7f maiden at York in July 2005 and his ninth place hardly under Tony Culhane hardly hinted at what was to come.

'He'll be a nice horse later on'

Channon did not have to wait long to be proved right as two starts later he won a Goodwood maiden.

His work at home never improved, but at three Youmzain was at his most prolific. He won at Catterick, finished third in the Derrinstown Stud Derby Trial in the first of many encounters with Dylan Thomas, won the Bahrain Trophy and showed further evidence of his quality by landing the Great Voltigeur, ridden by Richard Hughes for the first time.

He then ran future Arc winner Rail Link to half a length in the Prix Niel and rounded off the campaign in Germany with his first Group 1 triumph.

By then connections had already seen signs of his quirks and in the next four seasons he would add only one more victory.

"He was one of those horses who at home wouldn't beat me," said Channon. "Life was a game to him. He was able to raise his game against top-class opposition and yet up against moderate ones wouldn't even try."

In 2007 he finished third in the Sheema Classic and Tattersalls Gold Cup and second in the King George and lined up in his first Arc as a 66-1 chance.

In what was to prove the template for future efforts, Youmzain ran on powerfully to finish just a head down at the line. However, it took an age for the result to be confirmed while the stewards considered interference caused by Dylan Thomas to another runner.

"When I was second to Dylan Thomas I was convinced I would get there, but two strides after the line Dylan Thomas was a length in front of me again," Hughes says. "He wasn't doing a stroke until I came to his girth."

Youmzain was in his element in a big field when the pace was hot and the Arc was one of the few races in which he got it.

"You had to ride him like a handicapper," says Hughes. "You had to pass two or three on the bridle and then he would take off.

"Most Group 1 races had seven or eight runners and they would go too slow for him then quicken. In the Arc there were loads of runners and you're going at pace."

"I got a great run on the inner and had to switch him, which he always liked to do," he says. "Then suddenly I got a right surge at the end which put him into second. When I turned into the straight I thought I'd win. I had plenty of horse underneath me. It was just on the day I was beaten by a very good horse.

"For me he was a bit of a character. He tried hard but he always saved a bit for himself."

When he lined up in his third Arc, this time with Fallon in the saddle, Youmzain had been typecast. The perceived wisdom was that a visor would make the difference. The result was another second, this time to Sea The Stars.

"He was great to train, as long as you didn't get upset because he didn't work well," says Channon.

"He always came there with a chance but just had that knack of getting beat in the very best races. If he got to the front he would stop. It was difficult to know quite what to do.

"I suppose he has jumped into some of the best horses of this century in the filly Zarkava and Sea The Stars. Obviously it was frustrating but I would get more frustrated at everyone who thought they could train him better.

"I was getting advice to put a visor on and that drove me mad in the end. Winning is what it's all about, but I never felt he was as good with a visor, although he had run in them.

"Yes he was second to Sea The Stars in them but if you saw them they were cut down so much they were hardly visors at all. It would have drove him mad otherwise. He was one of those horses who wanted to do it his way."

Youmzain returned to Longchamp a fourth time but was only tenth in what was his final start. Still owned by Abdullah, he stands as a stallion at the Head family's Haras du Quesnay.

Youmzain's best performances were often in defeat, but in the 2008 Grand Prix de Saint-Cloud everything fell right from him and rider Richard Hughes.

He got the strong gallop off which he was able to cruise into contention 2f out and was able to quicken away from Soldier Of Fortune, who had beaten him in the Coronation Cup three weeks earlier. And even though he idled in front he had enough of a margin to hold on for a half-length victory.

Unlike the unfashionable Preis von Europa, which Youmzain also won, the Grand Prix de Saint-Cloud was no soft Group 1. Behind him were the third and fifth from the previous year's Arc, with his rivals containing the winners of the Irish Derby, Hong Kong Vase and St Leger among their number.

Khalid Abdullah has won four Prix de l'Arc de Triomphes, but his biggest earner on the racecourse is a horse who finished second in the race twice.

Flintshire was second behind Treve in 2014 and Golden Horn last year and is still going in the United States, where he has taken his prize-money tally past £5.3 million.

His former trainer Andre Fabre said: "I never felt he was unlucky. Most of the time he was beaten by better horses, such as Treve and Golden Horn.

"The only thing about him was he used to get rain a lot more often than we would have liked.

Flintshire won the Grand Prix de Paris as a three-year-old and his two other Group 1 triumphs under Fabre were gained overseas, in the 2014 Hong Kong Vase and 2015 Sword Dancer Stakes in Saratoga, which he will try to win again next weekend.

"He's Juddmonte's leading-ever earner," said Abdullah's racing manager Teddy Grimthorpe. "He didn't win more because he needed fast going and a fast pace. He was second in two Arcs and probably ran right up to his best mark both times.

"He's entirely genuine, he travels well, has a great countenance and presence and loves racing.

"He went to America looking to get the fast ground and fast pace, though rather ironically he got the fast ground but very slow pace at Saratoga [in the Bowling Green Stakes], when they all tried to box him in. But he just had too much class.

FIRST PUBLISHED 6:00PM, SEP 28 2017
In what was to prove the template for future efforts, Youmzain ran on powerfully to finish just a head down at the line