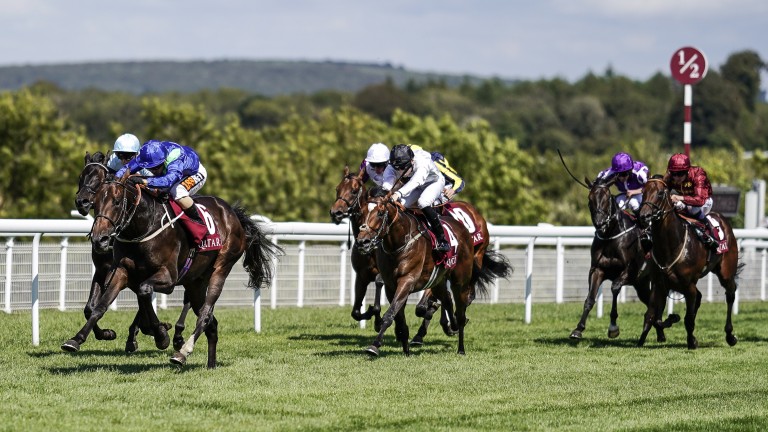 A handicap at Beverley will not have been high on the agenda when Godolphin bought the unbeaten Dark Vision privately after his Group 2 win in Goodwood's Qatar Vintage Stakes last year, for he was only around a 16-1 chance for the Qipco 2,000 Guineas at the time.

Eight races and 12 months on and Dark Vision has yet to add to his tally, but he has slipped down the handicap and looks to have found his level again.

Mark Johnston, who also has Victory Command in a field of six, was instrumental in recommending that the 20 members of the Kingsley Park 10 syndicate should accept Godolphin's offer, and he seems to have found a great opportunity at last for Dark Vision to get his head back in front.

His son and assistant Charlie said: "It's quite a weak race for the money in terms of its numbers and depth, so we were always going to throw a couple of bullets at it.

"Both of them ran well at York last time in much deeper and more competitive handicaps, Victory Command finishing fifth against older horses in a much better race than this and Dark Vision shaping over a mile as if he will be much better back at a mile and a quarter.

"We are looking to find an opportunity for Dark Vision to get his head back in front and off his sort of rating you would do well to find a better one."

William Haggas, trainer of Desert Icon
It's a nice race for him and he's very well, but he needs the ground to dry out. He's drawn on the outside, but there are only six of them.

Andrew Balding, trainer of Good Birthday
He should be suited by the rain they had earlier in the week. I was delighted with his run at Newmarket in a strong race last time and he has every chance.

Roger Varian, trainer of Three Comets
He has disappointed so far this season but has worked well in blinkers at home so hopefully can transfer that to the racecourse.

Richard Fahey, trainer of Arctic Fox
She hasn't been at her best since rattling off a hat-trick earlier in the season so needs to bounce back. She'd have a small chance on her best form but it's a tough race.

FIRST PUBLISHED 6:00PM, AUG 30 2019
We are looking to find an opportunity for Dark Vision to get his head back in front and off his sort of rating you would do well to find a better one