'You have got to be strong-willed to work in horseracing' 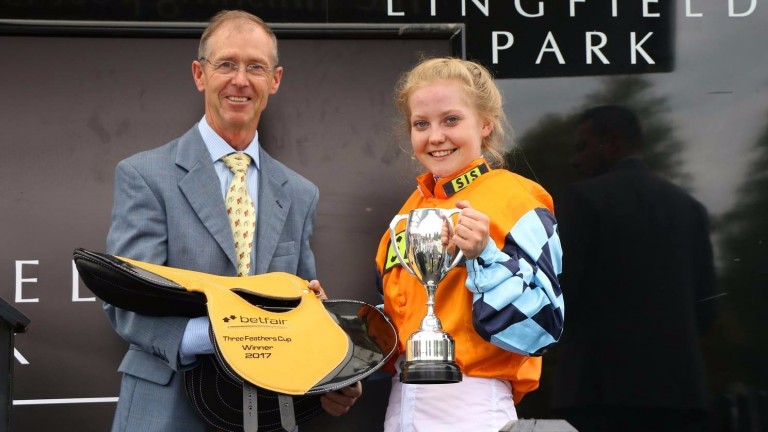 The invaluable role played by stable, stud and racecourse staff has been recognised by Racing Staff Week, which began on Saturday with the first of a series of daily initiatives.

Sponsored by Betfair, it is designed to inform and engage racegoers and supporters of the sport, while rewarding those who dedicate their working lives to it.

In the second of a series to coincide with the initiative, the Racing Post spoke to Elinor Jones, who works for Jamie Osborne and who won the Betfair Three Feathers Cup charity race for stable staff on Ceyhan at Lingfield last Saturday.

What was your first job in racing?
I did work experience with Charlie Longsdon but my first full job was with Jamie Osborne, through a placement from the British Racing School.

Why did you want to work in the industry?
Racing is on both sides of my family. My grandfather worked at Henry Candy's and my aunt rode breakers. I love horses and the first time I went to a racing yard I saw how nice it was working there. It's like a little family and everyone looks after you.

Who do you most admire in racing?
It's tricky as there are a lot of successful people I look up to but Freddy Tylicki and George Baker, who we know from riding our horses, have done amazingly in coming back so strongly after their injuries and keeping their mindset so positive. Frankie Dettori has had amazing success and I've met him and he's a lovely guy.

How do you celebrate a winner?
After Lingfield on Saturday I went out for dinner with my family, although it still hasn't quite sunk in yet. When the yard has a nice winner Jamie normally takes us out and we have a couple of drinks and a good reminisce about the day.

What can racing do to attract more staff?
It depends what yard you go to. Some yards are tougher than others, with different hours and different pay – I know that some of my friends are struggling. But you've got to be strong-willed to work in racing; if you go in half-hearted you won't really make it.

If you could pay someone else to do one part of your job, what would it be?
I enjoy every bit of my job. I get in there, ride my horses, bond with them at evening stables and go racing with them. I wouldn't want to miss out on any of that.

What's your biggest strength in the role?
I'm quite lucky with my height and weight. I'm just under five foot and weigh 7st, so I don't struggle as much as others. And I'm determined. If I want to do something I'll go out and do it. I won't hesitate.

If you weren't working in racing, what would you be doing?
I would probably go to the competition side or the therapy side,– but it would definitely still be with horses. I've always had a passion for horses and I started riding lessons when I was five.