'You can wash the mud off the silks, but not the stain off the race'

How Alastair Down ignited the flames after the 2001 National 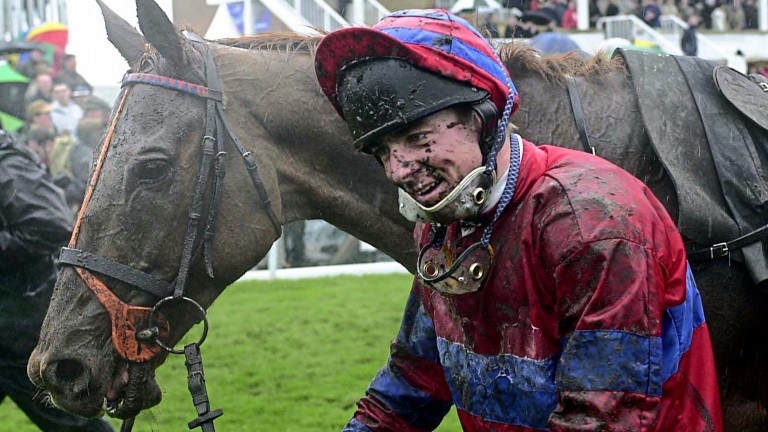 Muddy marvels: Red Marauder and Richard Guest after their slog through the Aintree mud
JOHN GROSSICK
1 of 1
5:49PM, NOV 23 2016

On Saturday the 'season that never was' reached a rancid climax with the race that should never have taken place.

Some will say the Aintree executive's decision to go ahead with the Grand National was courageous. It was not. It was gutless, witless and utterly reckless.

We have, God be thanked, 'got away with it' in the sense that, by an astounding piece of good luck, no horse or rider was killed or seriously injured.

But if I convey nothing else in a career writing about horseracing, I hope to get across in the calmer light of a Monday morning that the fantastic, breathtaking risk Aintree took with life, limb and the reputation of both the National and the sport was as incredible as it was indefensible.

It certainly provided a spectacle – as, in days past, did public executions and the games at the Colosseum. Let's face it, some folk get kicks from the aftermath of car crashes.

Those who say it was "a great race" and that "it's what the National is all about" must ask themselves if such knee-jerk cliches can possibly be true.

This wasn't a great race, it was an entirely predictable unfolding of accident and agony. And, while it may well have added to the folklore of the National, it has done nothing for its reputation or the long-cherished idea that racing is a sport.

You can wash the mud off the jockeys' silks, but not the stain off the race. It will go down as a memorable Grand National, but do we really want to be remembered for events like this?

We sat through Saturday morning knowing an accident was about to happen. A few of us tried to convince ourselves that "five or six might get round" but, deep inside, we knew they not only wouldn't but simply couldn't.

By race time, as the ground grew ever more unplayable, we were reduced to taking prices about three or fewer finishers to include no finishers at all. I should also declare an interest in that on Friday morning I had a bet of £300-£18 that the race would not be run on Saturday. But £18 doesn't quite buy my beliefs.

Those who insist the pile-up at the Canal Turn "could happen anywhere" and "distorted the number of finishers" are deluding themselves. The departure of eight at once may even have been a blessing in disguise, as we were thus spared the sight of them coming to possibly even worse fates over the next 22 fences and three miles of muddy morass.

It should be pointed out that there were some real heroes, as there always are in the midst of disasters.

The heroes were the jockeys who rose to this wretched occasion in a way that deserves our undying gratitude. No praise is too high for the exceptional feat of horsemanship that Richard Guest performed in getting Red Marauder – who jumps as naturally as a breeze block – round 30 fences and four and a half miles of marsh, through mistake after mistake before keeping his literally exhausted mount going to the line.

Timmy Murphy was brilliant on Smarty until muscle, lung and sinew melted like wax from three out. As for AP and Ruby Walsh, they will do racing few better services than the responsible way in which they brought Blowing Wind and Papillon home, doubling the number of finishers and writing the vaguely defensible figure 'four' in the record books rather than the shameful 'two'.

Thank goodness for the four horsemen of this apocalypse. They showed more respect for the event and their horses than the collection of dullards who sent them out with blithe reassurances that "they'll get through it" in the full knowledge they'd do no such thing.

"But all the horses and jockeys are okay," they bray from the edge of the abyss that they did their damnedest to cast our greatest race into.

What if a couple of horses had died?

But what if a couple of horses had died, or Red Marauder had collapsed after the line as, for one sickening moment, it looked as if he might?

If that had happened, the evening news wouldn't have treated the National as a quirky curiosity but as a scandal. And the Sunday papers, wall to wall with pictures of crunched horses, would have been calling for the sort of changes that would render the race unrecognisable.

We forget racing strikes very few chords of sympathy in the outside world. Driving home, seething at the game of Russian roulette that a purblind and privileged few had just played with the people's race, I rang my eldest daughter, born an hour before Mr Frisk won 11 years ago. Her first words were: "Dad, the National was horrible." I didn't put up much of an argument.

And that has been the universal reaction of most non-racing people to whom I have spoken and, just as worrying, of many seasoned and far-from-squeamish professionals.

I never thought I'd see the day when I watched a National and didn't enjoy it.

Never before, after a mere circuit, have I been haunted by the fear that nothing would finish at all and that the talons of an unsympathetic world would be sunk, inextractably, into the flesh of our greatest race.

For hundreds of millions of people the National is a television event. What they saw on Saturday was our most famous sporting event flirting with oblivion.

But of course the race wasn't run in the name of sport, or indeed the National's rich traditions. It was run in the name of expediency and money – with the overriding feeling being that, if the Cheltenham Festival had taken place last month, then Saturday's race would have been postponed.

But they pressed ahead on going that even the winning rider described as "borderline", adding, tellingly, that he had "never raced on worse ground".

The Aintree executive's mindset was made early in the day. Just before noon I spoke to one of the stewards, who insisted it was safe.

"But what if it rains for another three hours?" I asked. "It won't get any worse," he replied. Oh yeah? What was three hours further downpour going to do then? Dry it out a bit?

Everyone who loves jump racing enters a type of contract with themselves. It involves some complicated emotional equations about risk, fairness and the pursuit of glory.

Even on the desperate days, the soul-in-the-boots afternoons of One Man and Gloria Victis, we can justify the price because horses and jockeys are being asked to take acceptable risks, not having the impossible demanded of them in order to stage a freak show.

We broke that contract

But on Saturday we broke that contract, abused that trust, by sending horses and jockeys out for our most arduous event on ground that would not be raced on in any other circumstances.

We have staged The Great Escape through a magical mix of frankly undeserved good luck and the skill of the jockeys sent over the top to a known fate.

And the enduring images of the race are an unforgettable mish-mash of low farce and high drama that teetered on the edge of tragedy for 11 minutes.

As the surviving pair jumped Becher's second time, you looked back down that long line of rooted fences and saw the disconsolate figure of the luckless Carl Llewellyn plus the rag, tag and bobtail of our greatest race strewn randomly around like litter on a pavement.

I know after the nightmare of this season that everything was riding on this race, but that makes the decision to stage it even more hopelessly misguided.

If the fates hadn't smiled so benignly, if we had lost a couple, then believe me the critics would have come down like the wolf on the fold and an already sterilised event would have been castrated beyond any hope of future potency.

That, in addition to the unjustifiable punt they took with the lives of men and horses, is the chance Aintree officials elected to take on Saturday. And they didn't take the gamble with their race, they took it with our race because it is the public to whom this priceless asset belongs.

Like many, the first race I ever saw was the Grand National. How many children who watched on Saturday will feel they have seen something magical, something of which they want to become a part?

Perhaps by the narrowness of our deliverance from catastrophe, we will learn never again venally to place something so imperishably important on the altar of sacrifice. Never again to hang the National out to dry in the wet for 11 minutes.

On the practical front, we can assume they will look at both the drainage and the exits for loose horses. But if the key people at Aintree just shrug the criticism off with a smug smile, they will find themselves doing without the support of this newspaper in 12 months' time.

This is a piece written with mixed feelings – incredulous gratitude and a heavy heart. It will antagonise many whom I both like and admire, and for that I am sorry.

But, while racing should have the courage of its own convictions and not be ruled by the outside world, we have to understand that we are part of it.

On Saturday we presented a spectacle that will have repelled infinitely more people than it attracted. We have indeed 'got away with it', but that doesn't mean we should have done it.