Yorkhill leads a stellar cast into battle at Leopardstown 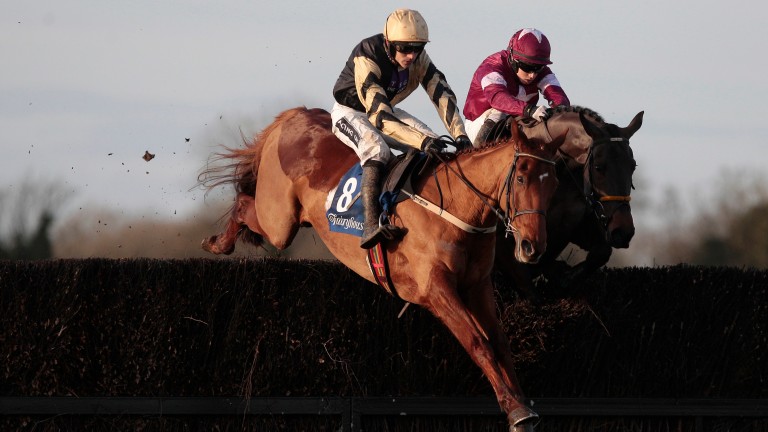 Yorkhill has been well backed for the JLT Novices' Chase at the Cheltenham Festival
Patrick McCann (racingpost.com/photos)
1 of 1
By David Jennings 6:08PM, JAN 21 2017

Is Yorkhill an Irish Festival banker in the JLT Novices' Chase? Is Melbourne Cup runner-up Heartbreak City thrown in over hurdles off a mark of 125? Is Gordon Elliott the man to follow in valuable handicap chases? The answers to the above could be revealed at Leopardstown on Sunday.

Yorkhill, last season's impressive Neptune Novices' Hurdle winner, faces five rivals in the Grade 3 Coral.ie Novice Chase and BoyleSports report he has been the subject of significant support for the JLT at the Cheltenham festival ahead of Sunday's assignment.

The Willie Mullins-trained chaser, who made a winning start to his career over fences at Fairyhouse last month, has been backed into 13-8 from 2-1 with BoyleSports, whose spokeswoman Aoife Heffron said: "Yorkhill is now posing a substantial ante-post liability for BoyleSports as punters can't seem to get enough of Willie Mullins' seven-year-old and were only too happy to snap up 2-1."

Yorkhill will need to bring his 'A' game to Leopardstown, though, as Anibale Fly and Gangster, who are both rated 148 as chasers, are among the opposition.

Red-hot Coral.ie Handicap Hurdle favourite Heartbreak City will face 22 opponents in the €100,000 contest, including three from his own stable as Tony Martin has also declared Golden Spear (Denis O'Regan), Gladiator King (Niall Madden) and Tudor City (Robbie Colgan). Heartbreak City, who will be ridden by Donagh Meyler, is a top price of 11-4.

Gordon Elliott won the valuable Paddy Power Chase last month and he has declared seven in the Coral.ie Leopardstown Handicap Chase, with man of the moment Jack Kennedy taking the ride on A Toi Phil.