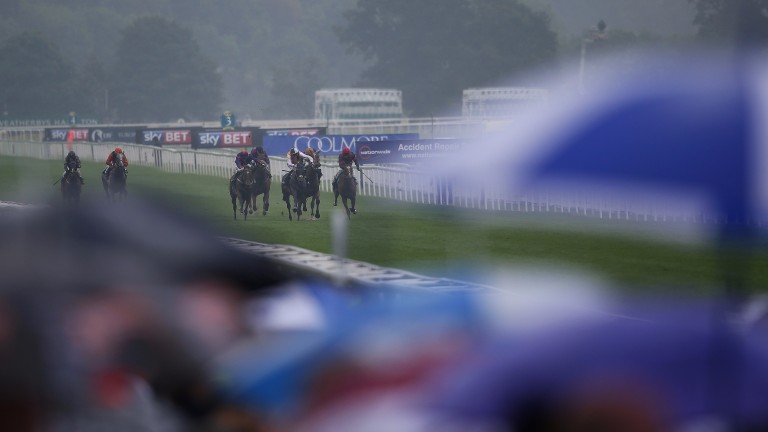 York has dodged most of the heavy rain that has fallen in Yorkshire
Alan Crowhurst
1 of 1
By Joe Tuffin UPDATED 5:23PM, AUG 12 2019

As the rest of Yorkshire is subject to severe rainfall and, in some places, flooding, officials at York reported that they are happy with conditions ahead of next week's Ebor festival.

Rainfall has been so severe that a flood alert was issued for the River Ouse – which cuts through York and past the Knavesmire – on Sunday.

However, York's assistant clerk of the course Anthea Morshead said of conditions on Monday: "We haven't had to water for a long time so it's good natural ground – good, good to soft in places.

"We've had about 1.4mm today, it's been a pretty dry, and we had only two millimetres over the weekend. We've been very lucky – to the east they've had very heavy rain around Middleham and the Yorkshire Dales, and some of the heavy stuff has also been to the north."

Temperatures in the area are forecast to remain settled between 17 and 19 degrees for the rest of the week and beyond.

Morshead added: "It seems as if it's always around this time in the past ten years that the weather starts to break down a little bit, although last year was very different. But it's not bad at all, we'd take it at this stage, we're happy with where we are."

Tom Segal has a potential Group horse and a lively outsider to back in the Ebor Armory tees up Arlington Million tilt by taking on Mohaafeth in Group 2 Thady Gosden can't see a handicapper beaten at Ascot English tracks prepared for return of bumper crowds after easing of restrictions Game on! Bryony Frost jocked up to ride in five-furlong dash for jump jockeys Tony Mullins relishing Ebor test for Gold Cup runner-up Princess Zoe