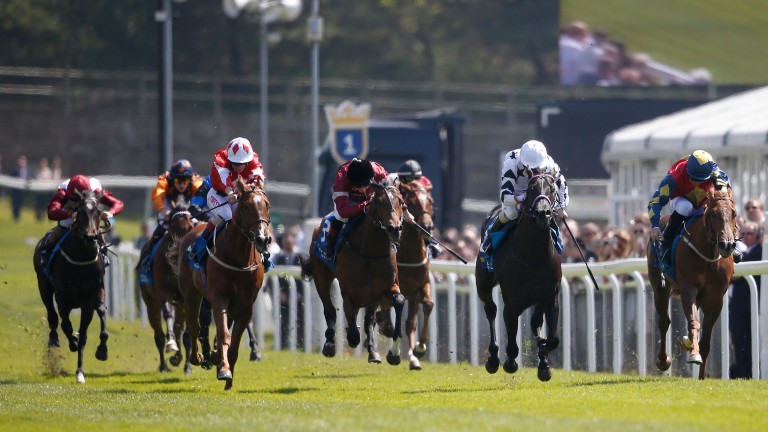 It pays to know your history at Chester. Not only does it enhance your enjoyment of a venue that has hosted racing since Roman times, it can also put you on to a winner.

The record books show that trainer David Evans and John Egan can be a mightily effective around these tight turns.

And those who took the long view and ignored the quiet fortnight the pair had been going through were rewarded as they combined to land the opening Stellar Group Lily Agnes Stakes.

Egan showed the benefit of his vast experience here as he got Yogi's Girl quickly out of stall three and grabbed the lead on the inside rail, making all and having just enough left to hold off Black Orange.

She got the verdict by a nose in the photo finish and Evans said: "The way my luck has been going, I thought she got had nutted.

"A few of the fancied horses were drawn badly. But John is brilliant round here, isn't he?"

But he rejected the suggestion it had been a bad week and said: "The same day I talked to Karl about the job I heard that the seven-year-old daughter of a good friend of mine had cancer – now that's a bad week.

"What Mr Burke and the team gave me was unbelievable and I was very lucky. He gave me a great opportunity, there's been no fallout, he's a businessman and I respect him."

As a son of 2008 Oaks winner Look Here, Here And Now's success in the 1m4½f handicap meant a great deal to Ralph Beckett.

"The family is one I know more about than any other and his mother was about 15lb better at Epsom than anywhere else so we were keen to come here," said Beckett.

"We might think about the King George V at Royal Ascot – he's a good fun horse more than anything else."

El Astronaute displayed his effectiveness at Chester once again with an all-the-way victory in the 5f handicap.

Trained by John Quinn for owner Ross Harmon, the 2-1 favourite has not been out the first two in four runs on the Roodee and led from the off, with jockey Jason Hart making the most of the plum inside draw.

"He's a very fast horse and it was ideal when we were drawn in stall one as he made all last time at Newmarket and we knew he'd come on for that run," said Hart.

No beep necessary
After Yogi's Girl's victory in the Lily Agnes, Ed Chamberlin welcomed David Evans on to ITV Racing's podium for a chat, but the trainer replied: "No, I'll swear."

Less is more
Chester has shrunk its racecard so it fits inside a jacket pocket or in a small handbag. At £5 a pop though it will empty a few pockets and purses as well.

Don't play it again Sam
Sam Hitchcott was replaced on his only two rides as Pat Shanahan snapped up Silvestre de Sousa and Jim Crowley when their mounts were withdrawn.

Thought for the day
It's horses for courses here and it was no surprise messrs Balding, Evans and Hills were among the opening-day winners.