Yanworth begins quest to fly flag for Britain at festival 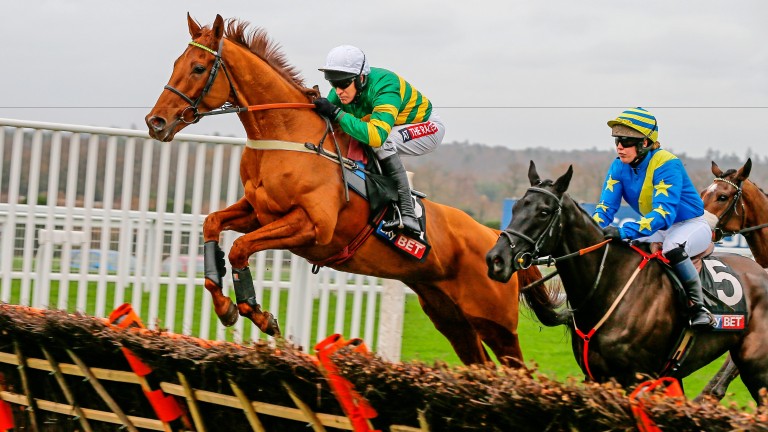 Yanworth returns and could be Britain's leading Champion Hurdle hope
Mark Cranham
1 of 1
By Mark Scully 7:51AM, NOV 19 2016

If the Champion Hurdle trophy is to remain in Britain instead of making its way to Ireland as it has in the past four years, perhaps the home team's best hope is Yanworth, who makes his seasonal reappearance on Saturday.

Aside from Altior, who looks set to embark on a chasing career, Yanworth is the shortest-priced British hope in ante-post markets for Cheltenham's opening-day feature – and has only Thistlecrack in front of him in terms of Brits in the World Hurdle betting too.

Trainer Alan King admits this race will tell him a lot about the ultimate destination of Yanworth's season, but the six-year-old's place in the pecking order among JP McManus-owned leading lights looks assured, with Barry Geraghty heading to Ascot instead of Haydock, where My Tent Or Yours is set to line up.

"Yanworth looks fabulous and if anything he's a little bit stronger than last season," King told his website. "This has been the first target since the summer as he only gets the 4lb half-penalty because his Class 1 win came in a novice hurdle.

"He’s done everything we have asked of him and is in very good form, so this should help guide us as to whether we should be looking toward the Champion or the World Hurdle, and this week’s rain came at just the right time for him."

Rockerfeller climbs to peak
Should the World Hurdle become the goal, it is likely his path will cross again with Saturday's opponent Lil Rockerfeller.

The five-year-old will bid to book his spot in the Long Walk Hurdle back at Ascot next month in a race connections opted for over Newbury next weekend due to the better prize-money.

Lil Rockerfeller has risen to a peak rating of 160 following his third-placed effort on his seasonal reappearance behind Silsol at Wetherby last month and trainer Neil King has no arguments with that assessment.

"We were thrilled to bits with the Wetherby run," he said. "In my book it was a career-best and the handicapper put him up 3lb, so he obviously thought so as well."

Zarkandar still has zip
Zarkandar also features in this small but talented field after unseating at Aintree a fortnight ago and trainer Paul Nicholls said: "What happened was unfortunate but it did show he had that old sparkle.

"I'm always a bit nervous when a horse has been off for a long time and they run back so quick, but he seems very well and the ground will suit him."

Garde La Victoire again reverts to hurdles after his Haldon Gold Cup second, and trainer Philip Hobbs said: "He was really good after Exeter and our original plan had been to run in the two-mile handicap chase on this card, but with just a few runners in the race and us only being very slightly wrong at the weights with one or two of them, it seemed we ought to have a go for a £100,000 race."

Court Minstrel completes the line-up and trainer Evan Williams said: "He's really well and we prefer to run in this sort of race rather than handicaps. We're rolling the dice but fingers crossed he can pick up some nice prize-money."

FIRST PUBLISHED 6:00PM, NOV 18 2016
This should help guide us as to whether we should be looking toward the Champion or the World Hurdle