Staying route likely after Yanworth forced to battle for success 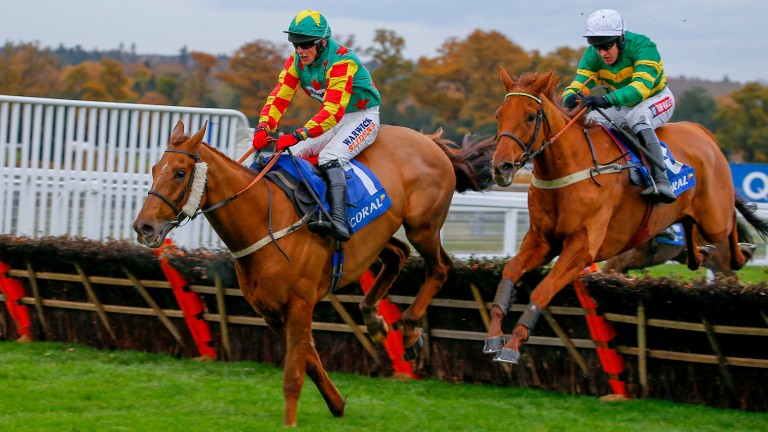 Alan King spoke of his “five minutes of hell” after it took Yanworth until around halfway up the run-in to wear down the gutsy Lil Rockerfeller.

The World Hurdle, for which Yanworth remains a general 10-1 chance, now looks a much more likely Cheltenham festival target than the Stan James Champion Hurdle, but further improvement will clearly be needed from JP McManus’s talented six-year-old. King, however, is confident that there is plenty more to come.

After Barry Geraghty had got the 4-5 favourite home by three-quarters of a length, King admitted: “That’s a huge relief. He hasn't been on grass at home and one or two of what I would call my 'proper jumping horses' have just been found out this week. Don't get me wrong, he's done a lot of work, but there will be a lot of improvement to come.

“He came off it turning in and I thought between the last two Lil Rockerfeller had me, but then he winged the last. He's not had a lot of proper match practice as he won his first three or four last year without coming off the bridle. He'll have learned a lot today, and physically he will come on.”

King added: “I’ll speak to the boys, but I'd imagine he may well go up in trip now so, he could come back here for the Long Walk.”

Geraghty, who was at Ascot for Yanworth in preference to Haydock for My Tent Or Yours, spoke in similar vein. He said: “I was never sure I would get past until he flew the last, and then he battled well from there.

“He's very comfortable at that trip and he's possibly more of a staying type than one to be coming back to two. But he'll need to improve a lot. Lil Rockerfeller is a good horse, but he's got a bit to go with the best."

King’s neighbour Neil King was thrilled with Lil Rockerfeller, who continues to go from strength to strength and is pencilled in for a rematch in the Long Walk.

He said: “He's raced in a bit of a lazy fashion today but I have to say I thought we had them beat going to the last. But how can you fault that? I came here saying I'd be happy if he finished second to Yanworth, and that's what he's done.”

FIRST PUBLISHED 2:57PM, NOV 19 2016
I was never sure I would get past until he flew the last, and then he battled well from there