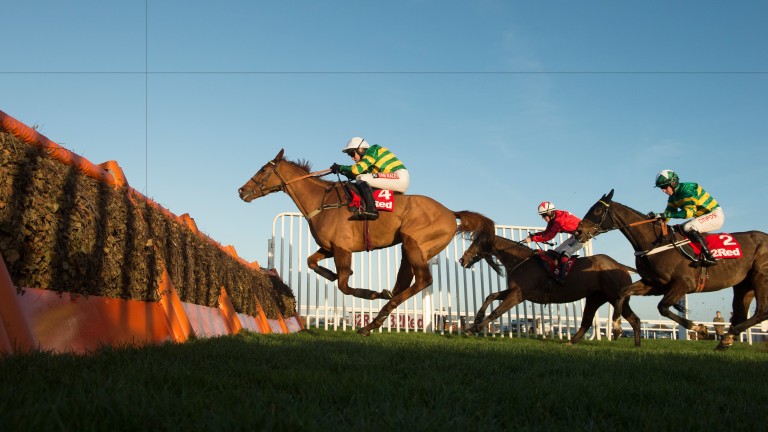 Yanworth clears the final flight on the way to winning the Christmas Hurdle at Kempton
Edward Whitaker
1 of 1
By Jon Lees 7:54PM, DEC 26 2016

Forced off the Sun Bets Stayers' Hurdle route by the emergence of Unowhatimeanharry, Yanworth made trainer Alan King grateful for the switch as he refashioned himself as a Champion Hurdle candidate.

The six-year-old destined for three miles a month ago showed he could compete at two as he dismissed a field containing two of the top division's most seasoned competitors, The New One and My Tent Or Yours, to give owner JP McManus a foothold in both Cheltenham Festival features.

Sloppy early on and under pressure to keep up approaching the turn as The New One and My Tent Or Yours went toe-to-toe in front, Yanworth finished off the race better than he started as he secured his first Grade 1 victory in the 32Red-sponsored race by three and a quarter lengths. The New One finished second, with Ch'tibello relegating My Tent Or Yours to fourth.

"I really thought we were very vulnerable today," said King. "Everything was probably against Yanworth with Kempton being a sharp track and we did not get the rain I was hoping for during the week, so I was delighted with that.

"The Ascot race put him in good stead. He had to battle that day and that's probably helped him again. At the time of Ascot my horses were a bit short and he probably needed it a little bit.

"Also, he needed a bit of match practice. It was all very well winning last season without coming off the bridle. Horses have to come off it to learn a bit. He learned something at Ascot and learned more today. He's dug in, and the further he went the better."

Jockey Barry Geraghty said: "I gave him a squeeze turning out the back hoping he was going to kick into gear and he did. I'd say his jumping was more tested at speed.

"We felt the Neptune was an option last year because he had a little more time. Today was his first step into proper two-mile company. He's passed it but will improve for it.

"He was very good at the last two hurdles. He was sloppy at the second. After that he jumped well – not brilliantly, but well. It was a step into the unknown and a good run."

As big as 10-1 in the morning, Yanworth was cut to a top-priced 6-1 for the Champion Hurdle with race sponsor Stan James.

King added: "But for Unowhatimeanharry we were going for the Long Walk two weeks ago, but it's worked out well. This was a big step in the right direction and I wouldn't mind if we went straight to Cheltenham."

The New One had made his own mid-season switch, having been destined for a season over fences until the meeting he was due to run at was abandoned and he returned to hurdling to win the International Hurdle.

Rider Sam Twiston-Davies hinted the horse could now head to the race discarded for Yanworth after another Christmas Hurdle near-miss.

"It's never ideal having the two races so close together but he's run a very good race again," he said. "My Tent Or Yours kept us honest the whole way and Yanworth was a very good winner.

"Where we go Cheltenham-wise we'll leave to the boss and the owner. I'd love to ride him in the World Hurdle just to see, but at the same time you know going for the Champion there's a lot of question marks over a lot of the others, and you know you're going to get some prize-money.

"So do you risk it and go for the lot or do you go for the tried and tested route with the new tactics and the new bit?"

FIRST PUBLISHED 3:24PM, DEC 26 2016
He was very good at the last two hurdles. He was sloppy at the second. After that he jumped well, not brilliantly, but well. It was a step into the unknown for him and a good run