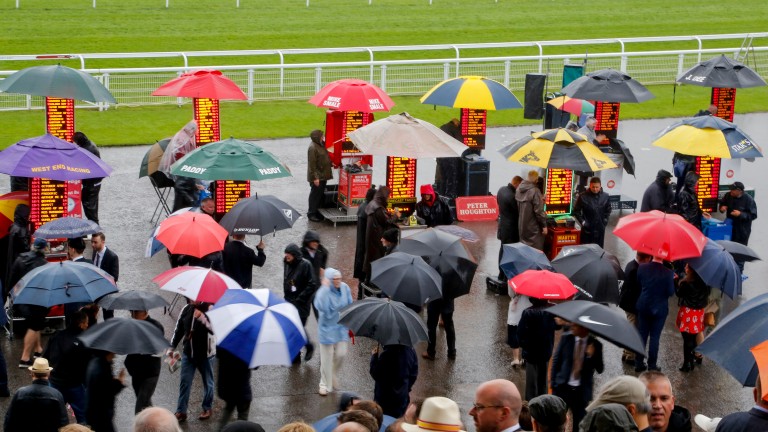 Rain and more rain: clerk of the course Seamus Buckley says it was the bleakest day he could recall
Mark Cranham
1 of 1
By Mark Storey 6:04PM, AUG 2 2017

Seamus Buckley expects the third day of the Qatar Goodwood festival on Thursday to start on "very, very soft ground" after describing rain-lashed Wednesday as the worst he had known at the track.

A team of emergency staff have been drafted in to repair the track overnight so that it is fit for racing. A total of 35mm had fallen in seven hours up to 5pm on Wednesday with the rain not forecast to relent until 10pm.

Buckley left the official going as soft on Wednesday night but said the going up the straight was "heading towards heavy".

Officiating at his 23rd and last Glorious Goodwood, Buckley said: "It's probably the worst weather I've ever encountered here or at any race meeting.

"There's a fair bit of damage and we've enlisted an extra temporary crew to get all the divots back in. We'll probably have a team of about 30 in total out on the course.

"It will take a long time to recover, but for now it's all about getting it back for tomorrow. We'll get through the best we can."

He added at 5pm after walking the course: "We've had 35mm of rain since 10am and it's forecast to keep raining until 10pm. The going up the straight is heading towards heavy, while out on the loops it's still soft.

"In view of that I think we'll start on very, very soft ground. I'm leaving it soft for now and will take a view in the morning."

The ground was churned up by an eight-race card, depleted by 25 non-runners and several withdrawals, none more disappointing than that of Churchill shortly before the Qatar Sussex Stakes, subsequently won by Here Comes When.

Thursday's card has already been hit with Nezwaah, Wuheida and Shutter Speed out of the Group 1 Qatar Nassau Stakes on account of the ground, while the official reason for Here Comes When not taking up his engagement in the Betfred Mile on Friday was 'going' - albeit he could hardly have been expected to carry top weight two days after winning the Sussex. First reserve Sir Roderic comes into the race.

Buckley added: "On Thursday we've fresh ground about six yards wide for three and a half furlongs up the straight and for two furlongs around the top bend."