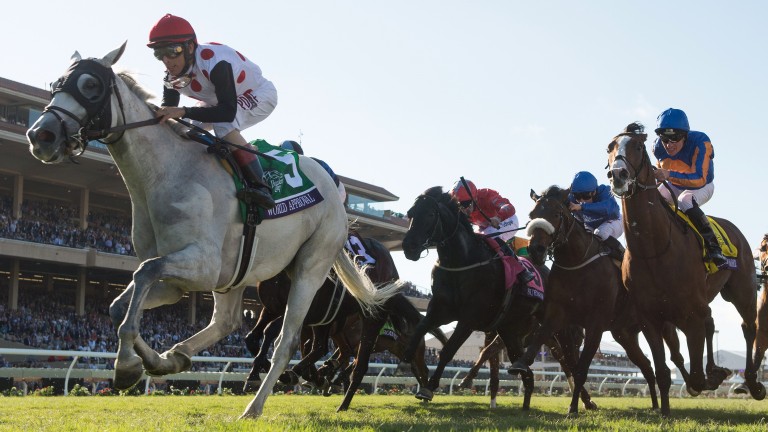 How about this for a showdown to look forward to next summer? Breeders' Cup Mile winner World Approval, queen of Australian racing Winx and the cream of Britain and Ireland's milers clashing in a Queen Anne for the ages at Royal Ascot.

That was the tantalising possibility dangled in front of the world's racing fans after the Mark Casse-trained World Approval stormed to victory in the Mile, beating the game Lancaster Bomber into second and with Europe's champion miler Ribchester a fast-finishing fifth.

Winx, who recently sealed her third Cox Plate, is being strongly considered for a European campaign that would likely take in the Queen Anne, while Casse knows all about the challenges and rewards of racing at Ascot, having brought Tepin over to win the Queen Anne last summer.

"It's something to think about," said Casse. "He would probably handle it as good, if not better. Now would he have the same results? We hope so. But I went back to Ascot this year and we ran a filly there, and I watched a lot of other American horses run there, and get beat up, and that made me realize just how great Tepin is.

"I think World Approval is right there. He is doing the exact same things that she used to do."

Owner Charlotte Weber added of the prospect of crossing the Atlantic with her five-year-old gelding: "There's never a never. He's there to win. He's there to ride."

FIRST PUBLISHED 9:32AM, NOV 5 2017
It's something to think about. He would probably handle it as good, if not better