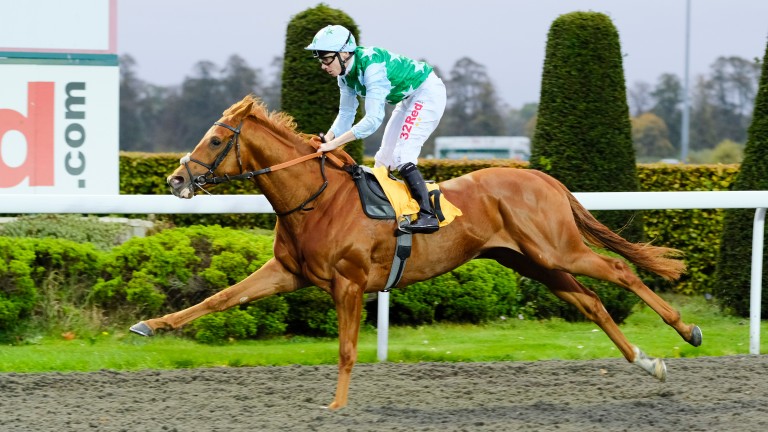 Glendevon ran a game race for the Richard Hughes yard in the Group 3 Prix Paul de Moussac at Chantilly on Sunday, setting the pace until collared a furlong and a half out and coming home fourth, beaten just over fourth lengths.

The impressive winner of the mile contest was Hamdan Al Maktoum's Wusool, whose sights are now set to be raised to the highest level.

Hughes, who had legged up Jamie Spencer on Glendevon, reflected: "He ran a good race and wore his heart on his sleeve. The winner was impressive and the ease with which he came past us probably got him a bit downhearted and cost him a place.

"He's a work in progress and really needs ten furlongs, but we need to mind him."

Wusool was ridden to an easy three-and-a half-length victory by Francois-Xavier Bertras, after which trainer François Rohaut said: "He was late to us and arrived only in August, while the soft ground has been a big problem all spring and even this week.

"But he showed what he's capable of today and this is only the start. He has a big future. Assuming we get decent ground he'll be aimed at the Prix Jean Prat next."

The British raider in the Group 2 Prix Hocquart, Aspetar, did not fare too well, finishing last behind Godolphin's Nocturnal Fox.

The Roger Charlton-trained Aspetar raced in midfield but faded in the straight under Kieran Shoemark, his trainer attributing the display to the ground being "much too quick for him".

Nocturnal Fox, trained by Andre Fabre, was partnered by Mikael Barzalona, who was completing a Group-race double, having landed the Group 3 Prix du Bertrand du Breuil on Hunaina.

Irish-based owner-breeder Trevor Stewart was celebrating after Hunaina, a €140,000 purchase at Goffs last November, held off the challenge of favourite Trais Fluors to gain a first Group success since being sent to Henri-Francois Devin at Chantilly.

Already a Listed winner at Kempton since making the switch, Hunaina could finish only fifth in the Chartwell Fillies' Stakes at Lingfield on his previous start.

"We had to choose between here and the Duke of Cambridge Stakes at Royal Ascot and finally came down on this race because she's already travelled to Britain twice this year," said Devin. "She's a very easy filly to deal with and has a great turn of foot.

"I've always thought of the Prix Rothschild over the straight mile at Deauville as the perfect race, assuming she maintains her form. I think she's still improving."

FIRST PUBLISHED 4:52PM, JUN 17 2018
He showed what he's capable of today and this is only the start. He has a big future

'Aidan is my Father Christmas' - Mendizabal lands Prix de Diane on Joan Of Arc O'Brien and Mendizabal out for more Classic glory in France with Joan Of Arc Classy Mohaafeth shows top-class ability but Stradivarius fans left frustrated Who would come out on top if Subjectivist and Stradivarius met again? Hector Crouch enjoys Royal Ascot breakthrough with Surefire in King George V It's four for Mark Johnston - not Stradivarius - as Subjectivist strikes gold