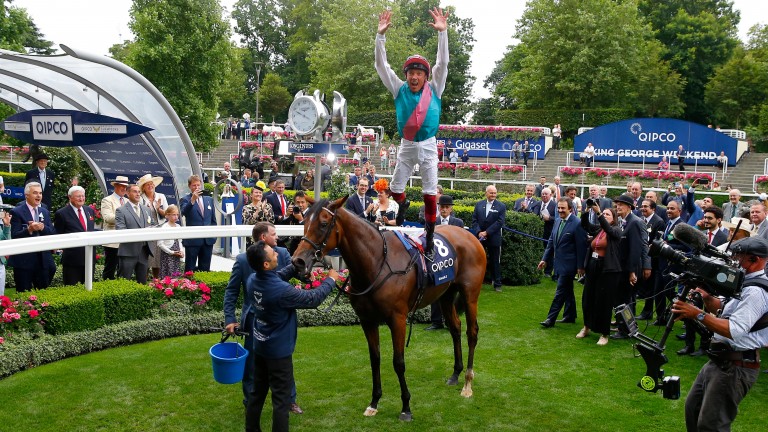 Enable: heading to York for the Yorkshire Oaks before a tilt at winning a third Arc
Mark Cranham
1 of 1
By Stuart Riley UPDATED 6:58PM, AUG 3 2019

Enable will have what may be her final run on British shores in the Darley Yorkshire Oaks this month before bidding for an unprecedented third triumph in the Prix de l'Arc de Triomphe.

Connections have decided the best way to prepare for her date with destiny at Longchamp will be on the Knavesmire on August 22 in a race she won after claiming a first King George as a three-year-old. She beat Coronet by five lengths that day before going on to beat Cloth Of Stars by two and a half lengths in the Arc at Chantilly.

Teddy Grimthorpe, racing manager to owner Khalid Abdullah, told the Racing Post: "Having talked to Prince Khalid and John Gosden the plan is to go to the Darley Yorkshire Oaks. She won that race on her way to her first Arc, so there's a good bit of precedent there, and John didn't want to go back to ten furlongs [for the International Stakes].

"Bearing in mind the main target has always been the Arc we think this is the best route."

The dual King George winner had the option of the International Stakes – sponsored by her owner's breeding operation Juddmonte – for which she was the 6-4 favourite, or skipping York entirely and heading straight to Longchamp.

Explaining the decision further, Grimthorpe added: "We have to do what's right for her and we always said we hoped she'd go to York."

Last year Enable joined Ksar, Motrico, Corrida, Tantieme, Ribot, Alleged and Treve as a dual winner of Europe's richest race, and her whole season has revolved around her bid for an historic third successive win.

York's chief executive and clerk of the course William Derby unsurprisingly welcomed the decision to send Enable to the Ebor meeting before a trip to Paris. He said: "It's fantastic news and we're delighted and honoured to have a filly such as her.

"She's won the race before and having reclaimed the King George it will be great to see her try and do it again. It was an amazing performance when she won it and for her to try and double up on that will be a great thrill. I'm sure racing fans throughout the country will want to see her on what looks to be her last race in Britain."

John Gosden dominates the entries for the Yorkshire Oaks but is unlikely to field a powerful challenge against Enable. Here are three possible dangers from other yards.

Pink Dogwood (Aidan O'Brien)
As a three-year-old she would get 9lb from Enable. Having already finished second to Enable's stablemate Anapurna in the Oaks and third in both the Pretty Polly and Irish Oaks she could provide a stern test. 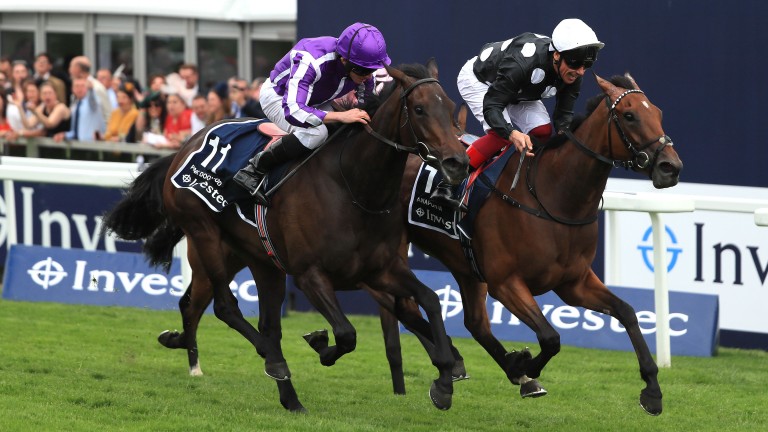 Magic Wand (Aidan O'Brien)
Last year's Cheshire Oaks and Ribblesdale winner Magic Wand has fallen just short at the highest level but she has four seconds in Group 1 company so is clearly useful. Her last of 11, beaten 50 lengths, in the King George was too bad to be true – should she bounce back she may get closest to Enable.

Antonia De Vega (Ralph Beckett)
Antonia De Vega won the Listed Abingdon Stakes on her only start so far this year – she missed the Irish Oaks due to the ground – and the horse she beat by four lengths at Newbury has won since. She is open to improvement and could yet emerge as a challenger.

FIRST PUBLISHED 2:43PM, AUG 3 2019
She won that race on her way to her first Arc, so there's a good bit of precedent there, and John didn't want to go back to ten furlongs