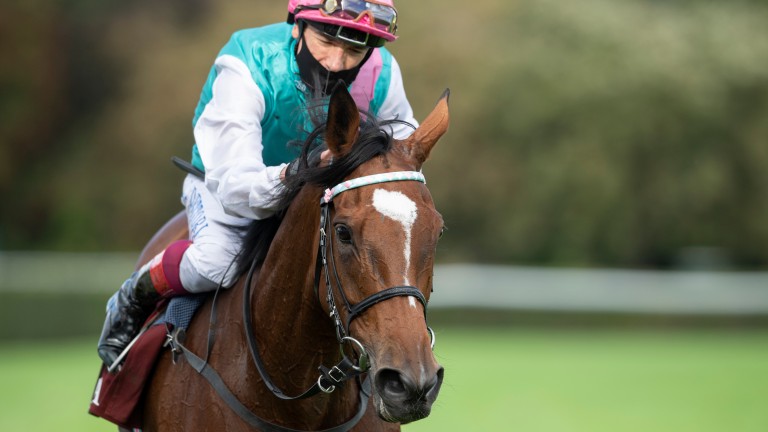 John Gosden and Frankie Dettori saluted Enable's special qualities after her glittering career was brought to an end on Monday when connections opted against having one final start and retired the wondermare with immediate effect.

Gosden, who campaigned Enable with great skill over five seasons, said: "Enable has retired happy and sound after an extraordinary career. We all here at Clarehaven Stables have been very fortunate to be with her for the past five years and to appreciate her strong character and athletic prowess.

"Her daily presence has been a joy and her record in Group 1s including four Oaks, three King Georges, two Arcs, an Eclipse and a Breeders' Cup Turf is a marvel and unprecedented. We look forward to visiting her nearby in her new career." 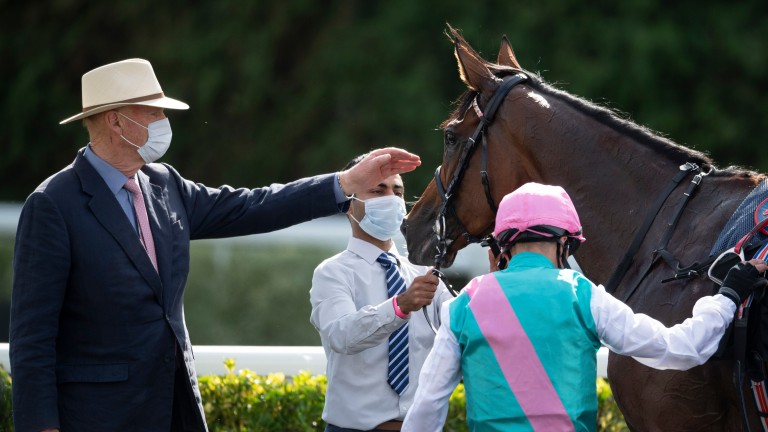 Enable helped rejuvenate 49-year-old Dettori's career, and the riding legend described his bond with the mare as stronger than any other horse he has ridden.

"She is the horse that I've loved the most in all my career, she really touched my heart," he said. "I did have a cry last night when I was told but more of joy than sadness because of all the great memories she gave me."

Khalid Abdullah's six-year-old, winner of 11 races at the highest level, secured her legacy as one of racing's brightest stars with back-to-back victories in the Prix de l'Arc de Triomphe and a record three wins in the King George VI & Queen Elizabeth Stakes at Ascot.

For the second successive year, the daughter of Nathaniel failed in her bid for a historic third success in the Arc this month when she finished sixth at Longchamp on desperate ground.

With her whole season built around the Arc, it was expected she would bow out in Paris but afterwards connections left the door ajar for one final appearance, possibly on Saturday's Qipco British Champions Day at Ascot.

Gosden said the final decision would be made by Abdullah and on Monday the owner's Juddmonte operation announced Enable would be retired immediately.

Juddmonte chief executive Douglas Erskine Crum said: "After consulting her trainer John Gosden and his racing manager Teddy Grimthorpe, Prince Khalid has decided that Enable will be retired from racing and will now join the Juddmonte broodmare band to be covered by Kingman in 2021." 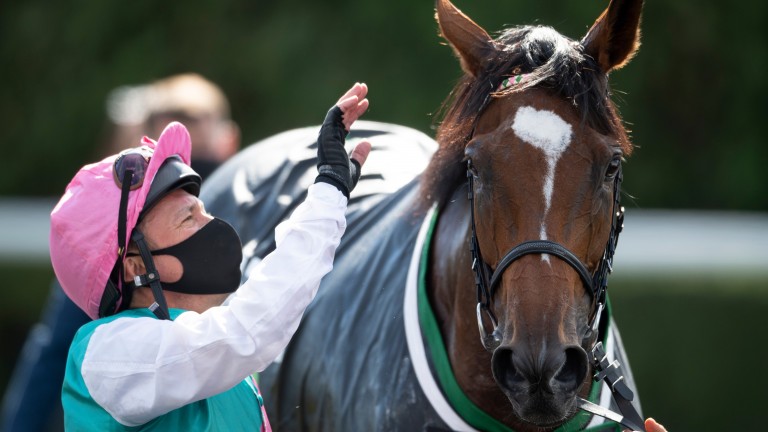 Grimthorpe added: "She has brought so much joy to everyone who has been involved with her. Her elegance and forceful personality have been nurtured by John and his team at Clarehaven, especially by Imran [Shahwani] who has looked after her with such calm and devotion.

"In her, Frankie found a willing partner to execute her ability on the racecourse. Her CV withstands the closest of inspections, very few can match what she has given to racing."

Enable rose from humble beginnings with her racecourse debut taking place on the all-weather at Newcastle in November 2016. Sent off at 7-2 and ridden by Robert Havlin, she got off to the perfect start on her only outing as a two-year-old.

The following season she was only third on her comeback at Newbury, but won when stepped up in trip in the Cheshire Oaks. She went on to the Oaks at Epsom as one of the leading candidates and delivered in style, winning by five lengths in a dramatic thunderstorm. 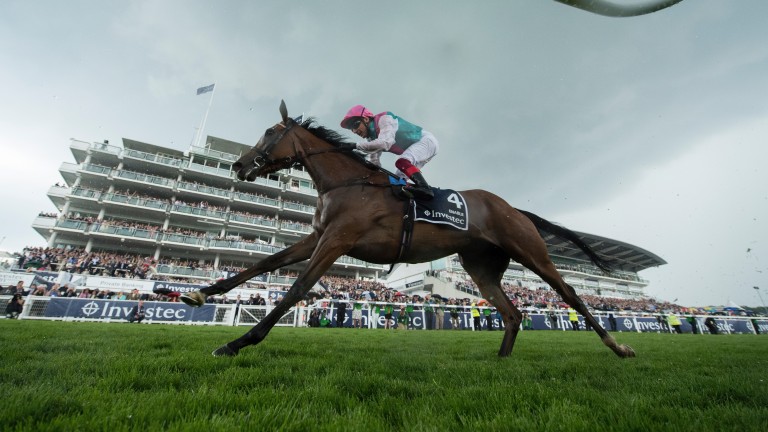 Enable: on top of the world in the Oaks at Epsom
Edward Whitaker

Three more Group 1 victories followed in her undefeated three-year-old campaign – in the Irish Oaks, King George and Yorkshire Oaks – before her first trip to France for the Arc.

Staged at Chantilly during Longchamp's redevelopment, Enable made the most of her age and sex allowances with a dominant victory over Cloth Of Stars.

In 2018, her return to action was delayed until September and she warmed up for her Arc defence by beating Crystal Ocean at Kempton.

Although her preparations for Longchamp were far from the ideal, she showed the determination of a true champion to hold on for a short-head victory over Sea Of Class.

Her global appeal was enhanced by a successful trip to the Breeders' Cup at Churchill Downs, where she beat old rival Magical to become the only horse to win the Arc and the Breeders' Cup Turf in the same year.

The following year brought further Group 1 wins in the Coral-Eclipse, the King George – following an epic duel with Crystal Ocean – and the Yorkshire Oaks. But the campaign ended in rare disappointment when Waldgeist denied Enable an unprecedented third Arc success.

After Abdullah's sporting decision to race on as a six-year-old with the season revolving around an Arc return, Enable finished only second behind Ghaiyyath in the Coral-Eclipse before normal service was resumed with wins in the King George – for a record third time – and another September Stakes success. 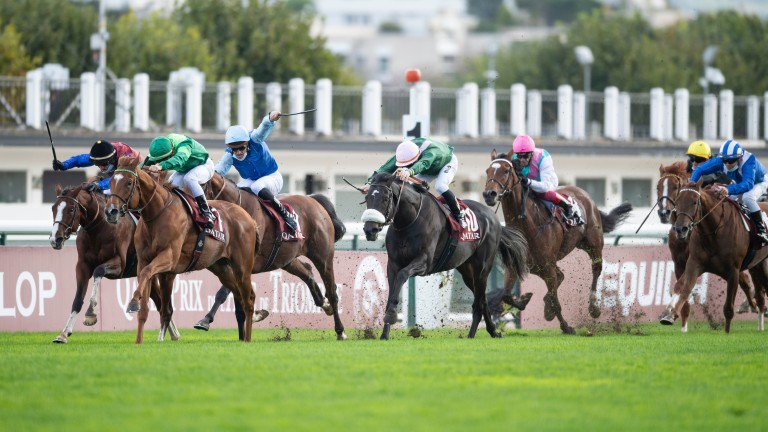 Enable (pink cap) tired in the ground at Longchamp on her final racecourse appearance behind Sottsass in the Arc
Edward Whitaker (racingpost.com/photos)

She was sent off at a shade of odds-on for her date with destiny in the Arc, but failed to fire in sixth with connections left to rue the very heavy ground and lack of pace.

Enable raced in four consecutive Arcs and her regular trips across the Channel made her a firm favourite with French racing fans.

Reacting to the news of her retirement, France Galop tweeted: "A huge thank you from all in French racing to Juddmonte Farms and Enable, as well as to Frankie Dettori and John Gosden. The dual Qatar Prix de l'Arc de Triomphe winner, who ran in the race four times, has made a great contribution to the reputation of our championship race."

Those earnings are a record for a horse trained in Europe, exceeding Highland Reel. The world record is £13,622,542 by Arrogate – another champion owned by Abdullah.

Frankie Dettori on Enable: 'I had a little cry but more out of joy than sadness'

From Newcastle to Paris and Kentucky: how Enable conquered the world

Members' Club: How to turn a great racemare into a great broodmare - what comes next for Enable

FIRST PUBLISHED 9:47AM, OCT 12 2020
Her elegance and forceful personality have been nurtured by John and his team at Clarehaven