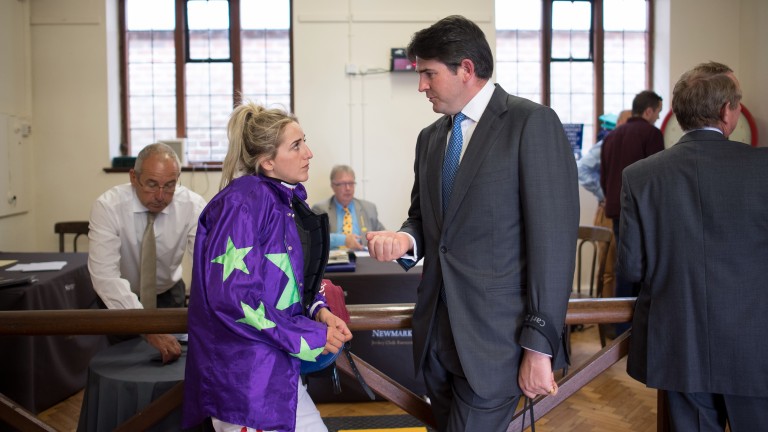 Josephine Gordon and Hugo Palmer at Newmarket earlier in the season
Edward Whitaker
1 of 1
By Colin Russell 9:00PM, OCT 4 2017

The juvenile Dragon Mountain, trained by Hugo Palmer, was disqualified after passing the post in third place in the mile novice at Kempton on Wednesday evening because rider Josephine Gordon failed to draw the weight when she weighed in.

Her mount, who had been sent off favourite at 3-1, had made much of the running but close home dropped back to third behind the fast-finishing Al Shaqab Racing pair of Kassar and Msayyan. However, when she went back to the scales Gordon weighed in at 8st 9lb instead of 9st 2lb.

The clerk of the scales lodged an objection and at the subsequent inquiry the stewards found that no blame could be attached to the rider as her horse had been saddled without the weight cloth.

Palmer, who was not on course, was fined because his representative was found to be responsible for the error.

Although each-way backers of Dragon Mountain lost their money those who had backed each way the Godolphin newcomer Bow Street, a 5-1 shot, were the beneficiaries as he was promoted to third.

It is by no means the first example of a horse being saddled up and sent to the start without its weight cloth after its rider had weighed out correctly.

Many punters would argue that he should have been deemed a non runner and Rule 4 applied because those who had backed him could not win, and there is a principle in betting which says that 'if you can't win then you can't lose.'

FIRST PUBLISHED 9:00PM, OCT 4 2017
The stewards found that no blame could be attached to the rider because her horse had been saddled without the weight cloth

And you thought finding the Royal Hunt Cup winner was hard . . . 'He's a horse we like a lot' - Roger Varian could hold key to big-field handicap Graeme Rodway on the importance of getting the right rider in the Sandringham