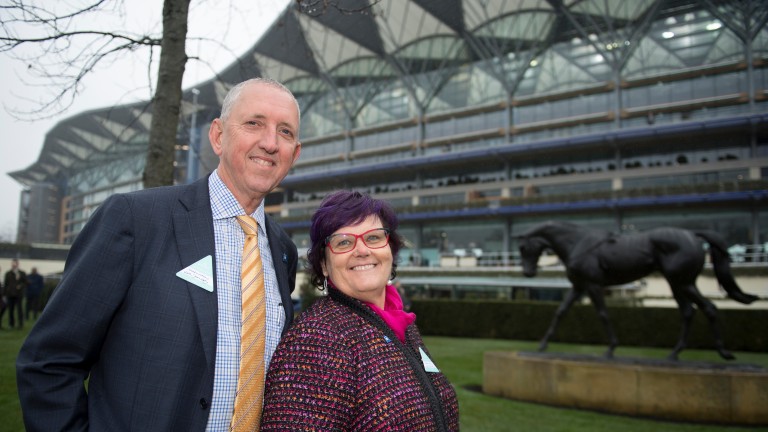 They came and they saw – but will she now come and conquer?

That was the question left very much unanswered after Debbie Kapitis and Peter Tighe, two of the three owners of Australia's wonder woman Winx, were treated to an afternoon of jump racing by Ascot, the racecourse keen to sell the mighty mare as chief attraction at this year's royal meeting.

The Chris Waller-trained triple Cox Plate heroine returns to action in a Sydney barrier trial on Monday, one day before it is announced where she figured in the final global rankings for 2017.

The great hope of British racing is that high on the list of Winx's achievements in 2018 will be victory in the Queen Anne Stakes, possibly after a trip to Newbury.

Kapitis, whose one previous visit to the sport's most iconic venue had been on the day Black Caviar scraped home in 2012, said: "Royal Ascot is a bucket list item. To be able to race a horse at Royal Ascot in the first race of the meeting would be everybody's dream, but that's not what guides us. The horse comes first."

First is where Winx has come in her last 22 races. Her attempt to make that 23 will probably be in Randwick's Apollo Stakes next month. What happens after that, nobody knows.

"It's not an easy decision and it's not a flip of the coin," stressed Kapitis.

"The travel is the biggest con. We have to consider the distance from Australia to Britain and how she would cope.

"Chris would also have to train the horse remotely, as he couldn't be over for all the time she would need to be here. On the other hand, Winx's strapper and track work rider know her inside out."

The Winx camp also know all about an English steak and kidney pie, plus the joy of a glorious sticky toffee pudding. The food served at lunch certainly pleased the owners. Nevertheless, the huge decision now facing them – one in which a factor could be Winx's chance to become the first ever quadruple Cox Plate winner – will not be based on what is good for them.

"If she doesn't come back the same girl we had before it could all finish very quickly. For that reason we don't want to give false hope to people in the UK by saying, 'We'll see you in June.'

Racing fans around the world will surely hope the answer to both questions is yes.