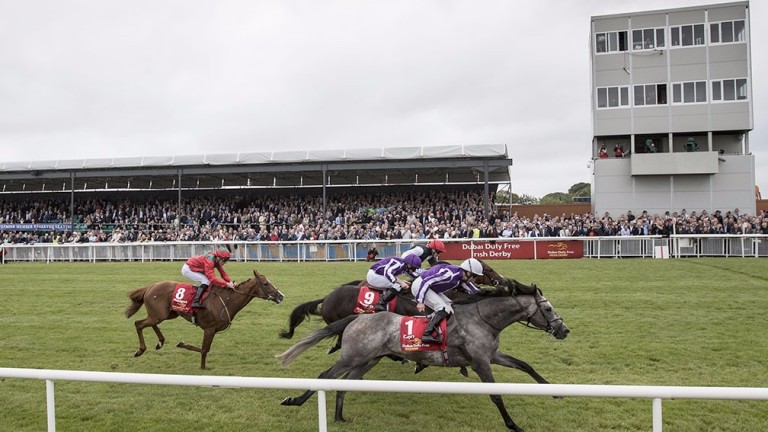 Capri (near side) holds off Cracksman (far side) and Wings Of Eagles in the Irish Derby
Patrick McCann (racingpost.com/photos)
1 of 1
4:35PM, JUL 2 2017

Wings Of Eagles deserved to win the Derby. He was a 40-1 shot, didn't have the sexiest profile and there were questions over the quality of the field, but there was certainly no fluke about his victory. He was the best horse on the day.

However, his winning RPR of 121 ranked him at the lower end of recent winners and his retirement through injury, after finishing third in the Irish Derby on Saturday, saw him follow a well-worn path of lower-rated Derby winners failing to add to their Epsom success.

In the last 20 years every horse who won the Derby with an RPR below 124 failed to land another Group 1. That list includes Ruler Of The World, Pour Moi, Sir Percy, Kris Kin, High-Rise, Benny The Dip and now Wings Of Eagles.

They were all solid colts who passed the Epsom test with flying colours, but none proved they could cut it against the leading older horses and Wings Of Eagles retired with something to prove on that score.

He goes out on something of a high as the leading middle-distance three-year-old colt in Europe, but that is partly down to the paucity of opposition, as there simply isn't a standout colt in the division at present and there have been close finishes to many of the Classics.

This is also just the third time this side of the millennium that we have got through the French, English and Irish Derbies without any colt in the three-year-old middle-distance division posting an RPR above 121.

Capri (119) came out on top by a neck in the Irish Derby on Saturday, beating the fast-finishing Cracksman (119) with Wings Of Eagles (118) a short-head away in third.

Capri had shown some promise in the Derby trials and he tried to make ground out wide round Tattenham Corner at Epsom on his previous start, which saw him tire in the closing stages, but he got a good ride tracking the pace at the Curragh.

The second and third gave him a good head start in the straight and Cracksman finished as though he might end up being the best of this group of Derby colts. Whether he can cut it against his elders is another matter.

Leading middle-distance 3yos of 2017 by RPR