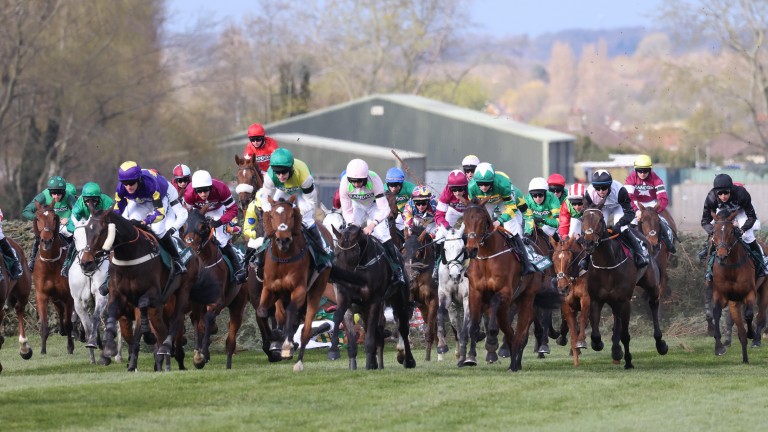 Cloth Cap (green cap, left of centre): one of the big disappointments of the Grand National
John Grossick
1 of 1
By Andrew Dietz UPDATED 10:54PM, APR 10 2021

He was sent off one of the shortest-priced Randox Grand National favourites of recent times but Cloth Cap exemplified the great disappointment of the British team as he failed to complete the race, with Jonjo O'Neill suggesting a wind problem hindered his chance.

The 11-2 favourite, who was relatively easy to back beforehand, was ridden prominently and travelled well before being pulled up quickly three fences from home by Tom Scudamore.

The trainer said: "Tom said he was going along grand and then he just started gurgling a little bit and he did the right thing pulling him up.

"Before that he was having a great run round. We'll get him checked out, but I think it will be his wind."

Scudamore added: "He's okay, he just got very tired. He took to the fences really well but we were beaten a long way out."

Cloth Cap's owner Trevor Hemmings has had great success in the National but it was not to be this time around, with his other runner Lake View Lad a first-fence faller.

O'Neill's son Jonjo Jr was riding another of the main British hopes in Mister Malarky, who was a big mover on the day having been backed into 12-1 (from 25).

Colin Tizzard's final National runner as a trainer was pulled up a long way from home along with the equally heavily-backed Takingrisks, who was sent off at 14-1 (from 20).

Takingrisks' trainer Nicky Richards felt that his 2019 Scottish Grand National hero had his race scuppered at the start.

"We wanted to get up in the first quarter of them and we were playing catch up right from the start," the trainer said. "Our race was over in the first furlong.

"He was getting no light and didn't get into any rhythm. I was glad Sean [Quinlan] pulled him up with a circuit to go."

'My life is about winning - and I would love to win the National again' Trevor Hemmings: I got on well with Ginger but he and I would have clashed