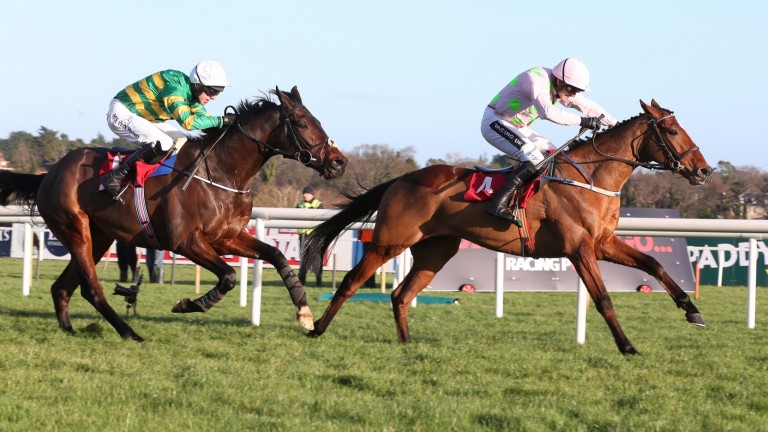 Bapaume stays on strongly to see off Landofhopeandglory
CAROLINE NORRIS
1 of 1
By Bruce Jackson 8:11PM, DEC 26 2016

Bapaume took revenge on his Fairyhouse conqueror and JCB Triumph Hurdle favourite Landofhopeandglory thanks to an audacious move on the home bend from Ruby Walsh.

Landofhopeandglory was pushed out to as big as 12-1, with third home Mega Fortune cut to 20-1 by Paddy Power.

The first three in a Grade 3 at Fairyhouse earlier this month again fought out the finish of this Grade 2 after Landofhopeandglory's stablemate Zig Zag had set a strong pace that soon had the field strung out.

Landofhopeandglory moved easily along with Bapaume in tracking the leader but as he weakened Walsh made his winning move, squeezing through against the inside rail as Mark Walsh was forced to go wider round his stablemate.

Bapaume dug deep into the last and stretched his length lead on the run-in to win by a length and three-quarters with Mega Fortune, under pressure two out, staying on dourly for third, failing by only a short-head to catch Landofhopeandglory.

Winning trainer Willie Mullins said: "He improved from his last run and we thought he might. He jumps and gallops and gets the job done, which is what's required.

"He might come back here for the Grade 1 Spring Juvenile Hurdle here is February.

"He had to do it the hard way at Fairyhouse and just got caught for race-fitness but with that under his belt we weren't afraid to be positive today.

"I think the other team [Joseph O'Brien] went more positive and I think we were lucky enough getting the run on the inside coming around the last bend.

"I said to myself that 'Ruby is in a pocket here,' but then it opened up a little bit after the second-last and he took his chance.

"He wouldn't excite you at home but he gallops and that's what you need in these four-year-olds' races - he is tough".

FIRST PUBLISHED 1:41PM, DEC 26 2016
He jumps and gallops and gets the job done, which is what's required