Roll on Cheltenham: Willie Mullins quick out of the blocks with early hat-trick 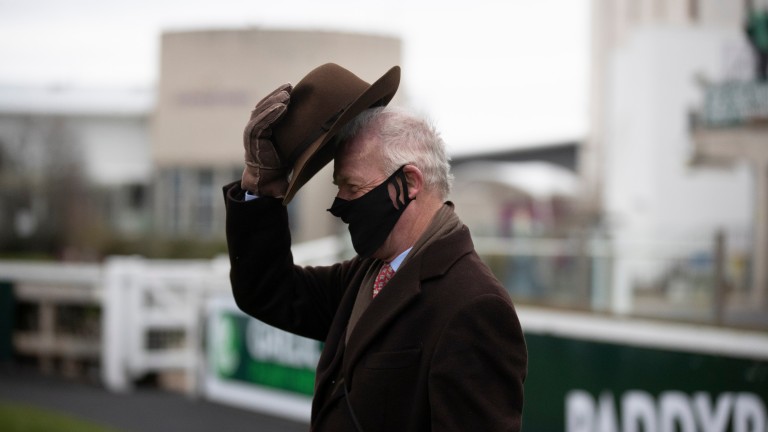 Willie Mullins is being tipped to sweep the board at the festival next week and Ireland's champion trainer left little more than crumbs on the table at Leopardstown after winning the first three races.

The third leg was added when 1-6 favourite Eurotiep landed the 2m novice hurdle under Aubrey McMahon, whose father Luke is a major player in the winning Down The Hatch Syndicate.

Mullins said: "That's great for Aubrey and the Down The Hatch Syndicate – that's Aubrey's third win on him and they make a good team. Luke McMahon put together the syndicate to buy this horse. He'll go for the final of this race at Punchestown and if there's something nice in between we might go for that too."

The winning jockey is best known for winning back-to-back amateur riders' handicaps at Galway's summer festival on Whiskey Sour and Uradel, both owned by his father Luke, and Mullins believes Eurotiep could keep the young rider's name in lights.

He added: "Eurotiep gallops and jumps and he might be Aubrey's first winner over fences next season as well."

On Elite Charboniere and Grand Bornand, Mullins said: "Elite Charboniere got the job done and jumped the last like he would prefer a fence. I think good ground is hugely beneficial to him, so he'll keep going from now on. It's the same with Grand Bornand and we'll probably target all the festivals with them."

Oliver McKiernan let out an almighty roar in the parade ring after the result of the photograph from the concluding bumper was announced, confirming Meet And Greet had edged out Top Bandit to complete a double on the day for the trainer.

It was a snapshot of emotion that has been missed on-course over the past year and a welcome window into the life of a hands-on owner-trainer who still gets as big a kick out of a winner as ever.

"That'll clear the lungs out," McKiernan said, almost apologising, after Meet And Greet followed up his first strike with Fox Fearless in the Adare Manor Opportunity Handicap Hurdle.

"It's great to get a double but both horses have very different profiles. Fox Fearless was a surprise but we came here expecting a big performance from Meet And Greet," he said.

McKiernan added: "To my eye, it looked a strongly run race and he was in the main group throughout. Johnny [Barry] was happy with him. I'd say he'll go for the Champion Bumper at Punchestown and that'll be it with him for the season."

FIRST PUBLISHED 7:30PM, MAR 8 2021
Eurotiep gallops and jumps and he might be Aubrey's first winner over fences next season as well