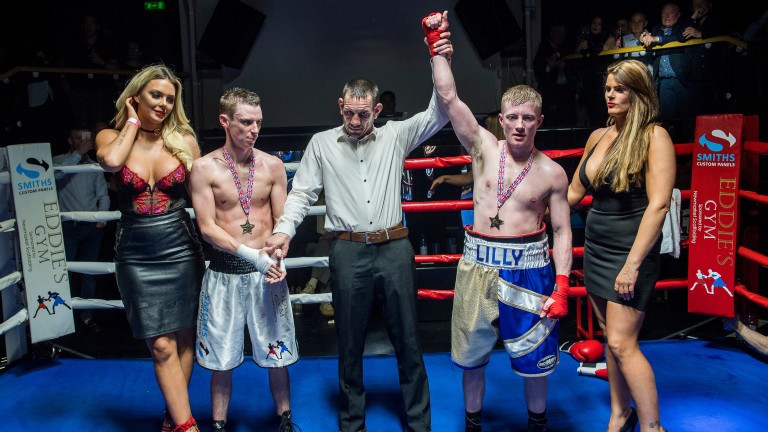 The pair got it on in aid of colleague Freddy Tylicki, who was guest of honour at the ten-fight event, and it was Carson who came out the stalls quickest in the three-round bout, and he sustained his run to gain a unanimous points decision.

It was the first time either rider had donned gloves in public, and they were roared on by an enthusiastic sell-out crowd of 300-plus which included many weighing room comrades such as Kieren Fallon, Hayley Turner, Rab Havlin, Jamie Spencer, Andrea Atzeni, Liam Jones and Stevie Donohoe.

Carson, who entered the ring to 'Flower Of Scotland', wore a flashy robe and had the names of his children sewn into the waistline of his shorts.

He said: "I knew I'd be the quickest in the early stages but I was knackered at the end of round two. Fair play to Simon, he gave it a good go, and it's great we can raise this money for Freddy and he could be here to see it. I would also like to thank Eddie Guest for organising such a great event." 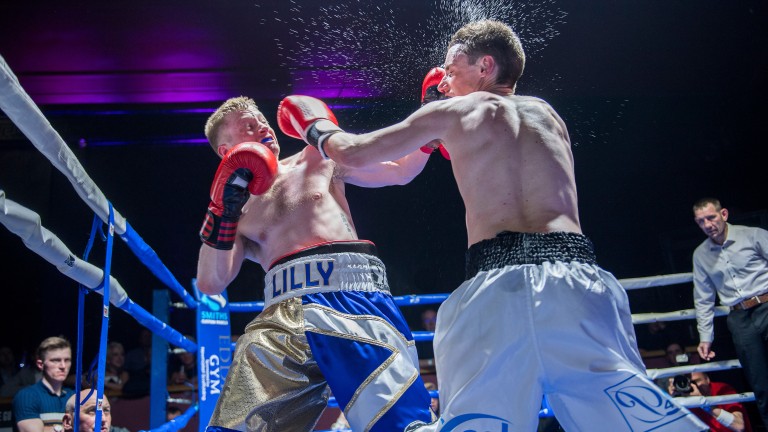 Action shot: Carson and Pierce battle it out
CHRIS BOURCHIER

As to future fights, he added: "I had a tattoo done the other day, which was painful and I said I'd never have another, but now I'm thinking about it. It's the same with the boxing, I might be back."

For his part, Pearce was disappointed with his performance and is hanging up his gloves.

He said: "I just froze out there under the lights and never moved like I had done in sparring. Fair play to William, he won every round."

The evening was something of a throwback to the stable lads' boxing nights of the 1980s, and was kicked off by Chris Cavanagh v 'Pistol' Pete McCulloch, who work for Mick Quinn and Paul D'Arcy respectively.

The pair raised more than £1,000 in aid of the Eastern Air Ambulance, who saved the life of their friend and boxing trainer Robert McKellar last year.

McKellar, who works for Cheveley Park Stud, said: "I collapsed on the golf course and my heart stopped nine times. I spent three days in a coma, and it's great what these boys are doing tonight."

Cavanagh, who had fought six times before, had too many guns for McCulloch, who lost on points and said: "It's a great night and thanks to all our sponsors. I'm retired."

FIRST PUBLISHED 2:08PM, APR 23 2017
I collapsed on the golf course and my heart stopped nine times. I spent three days in a coma. It's great what these boys are doing tonight"