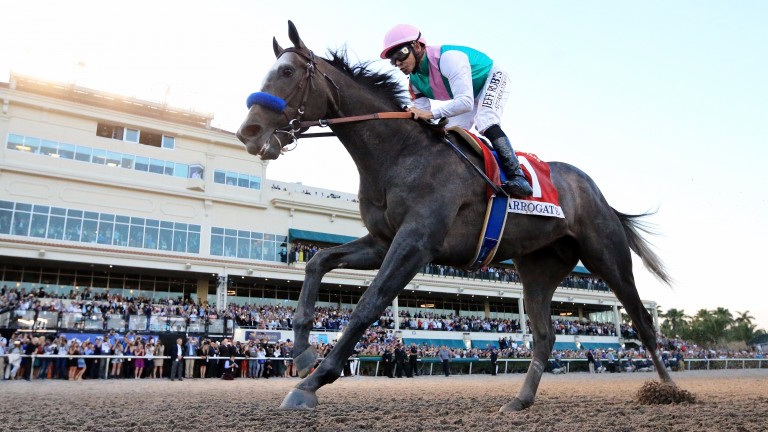 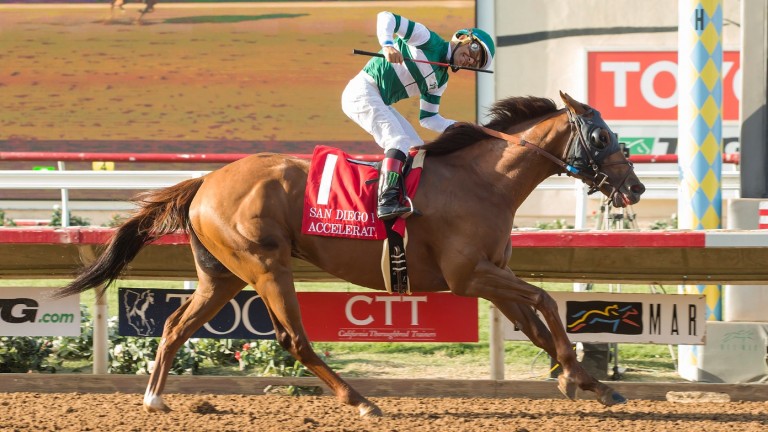 Arrogate: world's top-rated racehorse has work to do to redeem his reputation in the Pacific Classic
Mike Ehrmann/Getty Images
1 of 2
By Nicholas Godfrey UPDATED 9:35AM, AUG 20 2017

A simple, straightforward question lies at the heart of the $1 million Pacific Classic: will the real Arrogate show up? Or will the shadow version of the world's highest-rated racehorse, the one who flopped in such dramatic circumstances four weeks ago at Del Mar, be showing his face again in the San Diego track's $1 million signature event?

In what must surely rank as one of the most shocking results in recent US racing history, Arrogate was sent off at odds of 1-20 to win the Grade 2 San Diego Handicap on his first run since that unforgettable performance in the Dubai World Cup which made him the biggest prize-money earner of all time.

To the dismay of connections, the Juddmonte four-year-old put in a lifeless display to be beaten more than 15 lengths into fourth behind Accelerate, who reopposes in the Pacific Classic.

Trainer Bob Baffert – who said the horse had "laid an egg" – blamed himself, first suggesting his training regime had been too easy, then changing his mind and saying his final workout had been too strenuous.

Whether he was undercooked or overcooked, however, either explanation looks distinctly like a straw-clutching exercise, no more tangible reason has come to light, so here Arrogate stands: back at Del Mar, which this year hosts the Breeders' Cup for the first time.

A repeat bid for the Classic is Arrogate's ultimate target, which largely explains why Baffert is trying his luck again at Del Mar in the hope last month's shocker was a one-off.

"If the Breeders' Cup wasn't here, maybe I'd have been reluctant to run him back but we've got to find out," said the trainer, who faces a pressure-packed Saturday at this most laidback of American venues.

The extra furlong and a half should certainly play to Arrogate's strengths, while Baffert can reassure himself with a satisfactory workout this week over the Del Mar surface. "He just cruised around there," reported the trainer. "We're set."

Juddmonte's US racing manager Garrett O'Rourke is philosophical about Arrogate's defeat – his first since his career debut.

"It happened to Secretariat, it happened to Seattle Slew," he said, speaking to the Blood-Horse. "The good thing if it was going to happen, better off that it happen in the San Diego, which was just a prep race anyway.

"He just wasn't himself that day. It's something now that we put behind us and hopefully move forward and go on with the old Arrogate."

Arrogate is drawn eight of eight, and one of his chief rivals comes from his own barn in the shape of Collected (Bob Baffert/Martin Garcia), who loves the Del Mar surface and comes in looking to complete a four-timer.

The mile-and-a-quarter distance is a potential question mark for Collected, however, just as it is for Arrogate's conqueror last month, the front-running Accelerate (John Sadler/Victor Espinoza). The four-year-old holds the distinction of twice having finished in front of Arrogate, as he was second in the Los Alamitos maiden in which the world champion finished third in April 2016.

Three reasons why Arrogate should win...

At his best, world champion racehorse towers over his opponents, 13lb clear of next-best runner according to RPRs

Breeders' Cup winner New Money Honey (Chad Brown/Javier Castellano) is the intriguing one here as she switches to the main track from the turf after winning the Belmont Oaks Invitational on her most recent outing.

FIRST PUBLISHED 9:56AM, AUG 18 2017
It happened to Secretariat, it happened to Seattle Slew . . . the good thing if it was going to happen, better off it happen in the San Diego