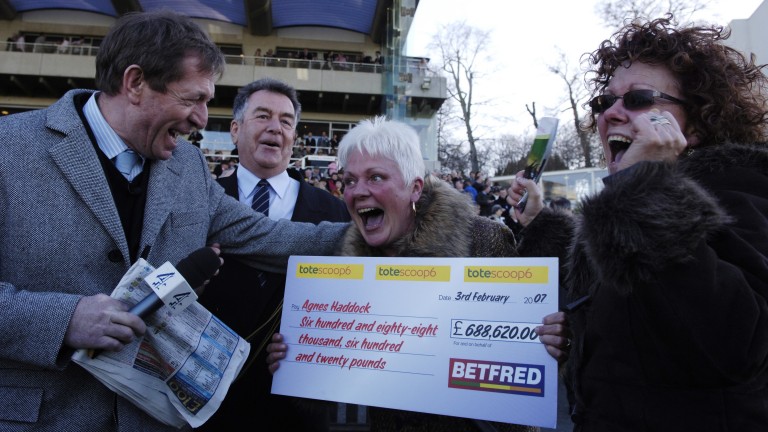 There was agony and ecstasy for those who made it through to the final leg of Saturday's monster Scoop6 as Closing Ceremony's victory at Haydock meant there were three winners, with each scooping a massive £643,903.40.

One Betfred customer who staked just a single £2 line was among the winners.

The Scoop6 win fund, which had swelled to nearly £2 million, was all but certain to be claimed as 52 tickets made it to the last race, but a dramatic photo-finish meant as well the winners there were some very unlucky losers.

Silva Eclipse, who carried the hopes of 13 ticket holders, looked likely to win jumping the last but was eclipsed on the line by the Emma Lavelle-trained Closing Ceremony.

Following a nerve-shredding wait for those involved, the judge gave Closing Ceremony the verdict by a nose.

The Scoop6 winners will have the chance to add to their fortune next week, with more than £1 million sitting in the bonus fund.

Totepool spokesman Matt Hulmes said: "Congratulations to the three Scoop6 winners this afternoon. It was a dramatic final leg as the judge took a while to separate Closing Ceremony and Silva Eclipse in the Haydock dusk, but it was to the delight of a triumphant trio, and the dismay of an unlucky thirteen.

"The three winners will now set their sights on adding the £1,030,922 bonus fund to their winning haul by finding the winner of a nominated race next Saturday."

How the bet unfolded

A total of 97,573 units made it through the first leg when Silver Quay, the fourth most popular choice, won Taunton's 1.05. His win was followed by that of Agusta Gold in Navan's 1.35, whose 10,555 backers rolled on to leg three, which was the 2.10 at Navan and was won by leading selection Goose Man, who had a shade more than 3,000 units riding on him.

Following Cyrname's dominant win in the 3.00 at Ascot there were 403 units still going with two legs left. Wakanda's hard-fought win in the Peter Marsh meant 52 made it through to the final leg.

Were you one of the unlucky 13? If you want to share your agonising near-miss please email editor@racingpost.com with your contact details