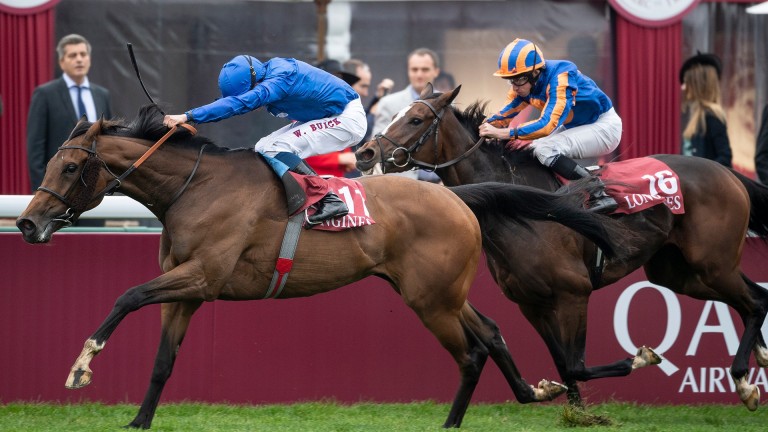 Wild Illusion fights off the attentions of Magic Wand at Longchamp
Edward Whitaker
1 of 1
By Andrew Dietz UPDATED 12:10PM, OCT 10 2018

The teak-tough filly, who gave Godolphin a second victory on the day following Royal Marine in the Prix Jean-Luc Lagardere, started the season with a fourth in the 1,000 Guineas in May and her gradual improvement through the season has shown no limits.

The surprise that greeted Wild Illusion's 25-1 success in the Marcel Boussac at Chantilly 12 months ago was replaced with an air of inevitability as the 15-8 favourite cruised into contention up the home straight before fighting off the attentions of old rival Magic Wand in the closing stages.

After following up her Guineas run with second-place finishes in the Oaks and Ribblesdale Stakes – on the latter occasion behind Magic Wand – she has thrived for the drop back to ten furlongs, backing up her victory in the Nassau Stakes in August by a length under William Buick.

"She's a great filly who is getting better," said the winning jockey. "She's been on the go a long time but her races have been targeted carefully. It was a great training performance and she's a filly we can look forward to."

Appleby, who admitted to going into the race in bullish mood, praised the daughter of Dubawi's attitude in the heat of battle.

"All credit to the filly, she's danced every dance and is so tough," he said. "We were confident we had the best filly, and everything was straightforward in the race. She looked fantastic and it was a deserved win.

"She was the only filly on the bridle turning in and I couldn't see her getting beat because there's one thing she won't do, she won't lie down and she'll gallop all the way to the line over that trip."

Wild Illusion earned an automatic berth in next month's Breeders' Cup Filly & Mare Turf, for which she was cut to 11-4 favourite (from 4) by Paddy Power, and Appleby has his sights on following up last year's success with Wuheida, who was subsequently retired through injury.

"This was always our target after the Nassau and hopefully she'll be going on to the Breeders' Cup," he said. "It's the last hurdle in front of us and it's on to America.

"One would hope we could keep her in training next year, as being by Dubawi they tend to improve year on year. She'd be an exciting filly to keep around, but those are nice discussions to have over the winter."

After welcoming back his tenth top-flight winner of the year Appleby – who registered his first Derby win with Masar in June – acknowledged the team effort behind the memorable campaign.

"It's been a stellar season," he said. "Eight weeks ago I was saying to the lads what we've done this year has been phenomenal. It's raised the bar and is something we've got to try to stay at now – and that will be the hardest thing.

"It's a great team effort and it's all been instigated by His Highness Sheikh Mohammed – he's been the one giving us that drive. I've been fortunate to be in the position that I receive these horses, and myself and the team have hopefully proved we can produce the goods on the day."

FIRST PUBLISHED 6:16PM, OCT 7 2018
We were confident we had the best filly and everything was straightforward in the race

Trainers' title race blown wide open - and we might just have a fairytale winner Hopes high of strong European team for Spring Carnival despite veterinary checks Brunch tastes good for William Buick as rider enjoys wonderful weekend Forgive the gushing enthusiasm but I feel like I have seen something special Who is better - Hurricane Lane or Adayar? Our experts have their say Zain Claudette holds on to provide Ray Dawson with emotional first Group win